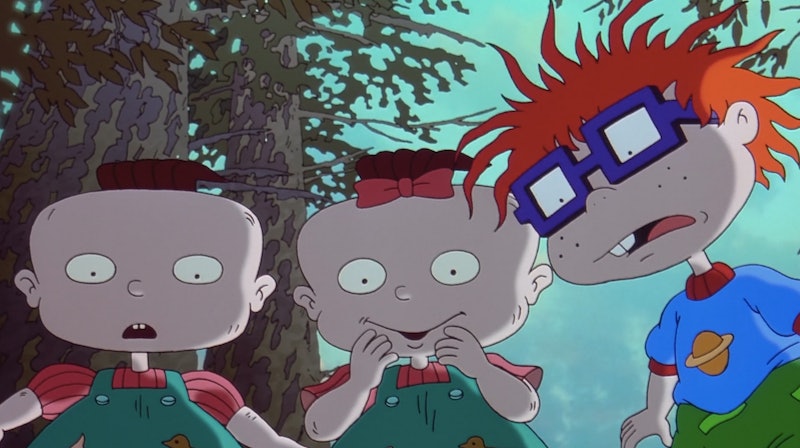 Growing up, I was one of those "allowed to watch The Simpsons" kind of kids. I couldn't wrap my brain around why other kids my age weren't allowed to watch it. I guess Bart was a troublemaker, but he always learned his lesson in the end! The ban on The Simpsons was mystifying enough, but then there were those houses that also didn't allow Nickelodeon. That was just preposterous to my Doug-and-Hey-Arnold-loving self. How could any parent deprive their child of the hilarity that was Rocko's Modern Life ? Well, after doing quite a bit of research, I'm finally able to understand a parent's trepidation about the network. Did you notice the hidden dirty jokes in Nickelodeon cartoons? No? Well, allow me to ruin some childhoods.

That's right; Nick has joined the ranks of Disney in having some of the most age-inappropriate cartoons ever created. You might wonder how the network got away with so many outright adult jokes, but I suppose they understood that parents (the "cool" ones) had to watch the shows too, so they might as well give them something to laugh about. Either that, or writers wanted to see just how far they could push the envelope before anyone noticed. From what I gather from this list, Nickelodeon never noticed. Or they did, but were totally fine with it. These cartoons did incredibly well during their run, dirty jokes and all.

Take a look at all of the things that totally went over your head as a kid. Read 'em and weep for your childhood.

1. This Suggestive Ad on Hey Arnold

I hope that's not what they're looking at ...

3. He Wasn't Alone. Grandpa Was Also Into it

NOT IN FRONT OF THE CHILDREN!

And he's "pulling his lever" at the same time.

Nickelodeon, you knew what you were doing.

6. That Time Rocko's Modern Life Wasn't Even Trying to be Subtle

8. When Rugrats Got Way Too Grown Up

How are they both so casual about this?

"Chokey Chicken? I LOVE CHOKEY CHICKEN!" I bet you do, Heffer.

10. Helga Got a Little Graphic in Her Love Notes to Arnold

11. There Was This Intimate Festival

In front of crowds, no less.

12. Rocko and His Pals Also Loved to Play "Spank the Monkey"

13. And After a Tiring Day of Jacking and Spanking the Monkey, You Could Go To

I hear it's very discreet.

14. Heffer is Clearly Happy About That

HOW DID NICK GET AWAY WITH THIS. SERIOUSLY.

15. Sven and Stimpy Share Private Time "In the Closet" That Involves "Sword Swallowing"

Followed by gagging and giggling.

And this is mild compared to a lot of these.

17. There Was an Episode of Rugrats Called "Cradle Attraction"

18. That Time Rocko Worked as a Phone Sex Operator

19. When Ren Did This to Stimpy

He also rubbed sunscreen on his nipples before starting.

Excuse me while I vomit.

It was located in Bikini Bottom.

I rest my case. And for the record, I'm glad my parents let me watch The Simpsons and Nickelodeon cartoons. I wouldn't have my warped sense of humor without them.