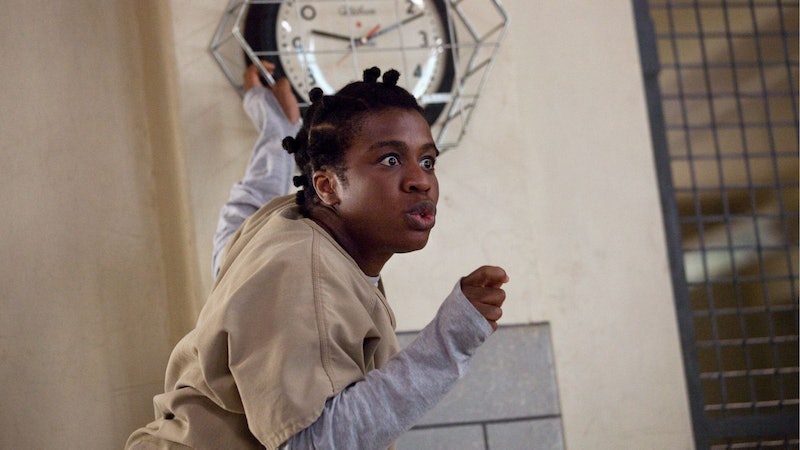 In case you haven't gotten the memo, emotional intelligence is cool now. And being kind to people, especially when you don't understand their experience... that's even cooler. Among the endless decidedly uncool insults it was once totally permissible to sling at people, perhaps "crazy" is the one we haven't fully addressed as a collective, awakened humanity. I think this is because that word very gently toes the line between just an adjective or adverb for something "out of the norm" and a really offensive undertone, and because we aren't well acquainted with why it would be offensive, we let it slide.

Let's first talk about who usually gets called crazy. Girls — OK, I think we covered them all! But seriously: it's been a really common insult used to define a woman whose emotional experience is out of the realm that someone feels comfortable acknowledging, or worse, it's used when someone who is going through an intense emotional experience, or actual mental illness, is behaving in a way that's not "normal." It's dismissive, short sighted, ignorant and stigmatizing, but while the freedom of speech (thankfully) prevails, I cannot actually argue that we should never use this word ever, ever again, but here's a pretty solid case for maybe reconsidering the next time you want to insult someone with it anyway:

And "crazy" = not "normal," in a "bad" way. The reality is that normal is subjective, and abnormal is, too; worse: the fact that we insult people by calling them "different" is really telling of how collectively brainwashed we are to believe "right" is a one-seal-deal. (Think about it for a second: historically, the people who were the most aware and awakened and right-minded if you define right-minded by being objectively kind and loving were called "crazy.") We just like to police one another into an idea of normalcy that makes our own uncertain existence a little more palatable, and it's not cool, in any way. It's like the subconscious, grown up version of bullying a kid to make yourself feel better. (OK, it's not "like," that, it is that.)

Just Because You Don't Personally Understand Someone's Experience, That Doesn't Make It Invalid

Similar to normal and crazy being subjective, the subjective experience that you have in your life is not the only one that is a valid and correct; just because the limited scope of people you've been exposed to in your life have collectively not behaved in a way that aligns with this "crazy" behavior that's so hard for you to stomach doesn't mean it's wrong, and it certainly doesn't mean you have a right to police it in a way that makes sense to you. Just because you don't share someone's emotional experience doesn't make it "other," and yours "right," and that's basically what you're arguing when you call someone behaving differently "crazy."

It's usually what happens when people aren't comfortable with women being anything but "small." Small in body, mind, emotion, you name it. Ideal women in our society are small and secondary, even if we think we've eradicated a lot of stigmatizing legally and socially, there are still these undertones that kind of show us how far we have to go. When women are emotionally expressive, it's threatening. And it's threatening because they're stepping beyond the very slim (ehem) line of what's acceptable and tolerable. When you call a girl who is not mentally ill insane because she's having some kind of emotional experience, it alludes to the fact that we're more comfortable when women don't do that, as it preserves their place in society: secondary.

Stigmatizing mental illness is a big enough issue as it is. When an illness threatens, or does, affect our cognitive functioning, our awareness, or our personalities, we find that scary. So scary, in fact, that we've all but made it so bad to be mentally ill that people would rather deny and avoid their issues than seek help from them. But talking about them in an open and honest way helps. It's fine, and almost normal at this point, for people to struggle with anxiety and depression, and that's because we've normalized it through conversation. All of this to say: the last thing that people who are genuinely struggling with mental illness need is to feel even more isolated or "different" than they already do.

I'm not going to call it victim blaming, though I'd argue that some people would probably find that appropriate. It's not true of every situation, but it's accurate often enough: when someone dismisses someone else's emotional experience, it's often because they want to avoid taking any part of the blame. Of course, this isn't to say that everybody else is responsible for an individual's feelings (I actually believe the exact opposite is true), but it is to say that if your behavior is the cause of someone's pain, and rather than address that, you dismiss them by calling them "crazy" (and therefore make yourself the victim of that person's "crazy" behavior) you're using feigned composure to manipulate, gaslight and alter how people see the situation, and all the while convincing yourself that it's reality.

It's A Way To Avoid Facing Your Own Emotional Experience

What a desire or pattern of dismissing other people's emotions comes down to is this: you do not want to address your own emotional experience, you don't want to bear down within yourself and listen, or understand, or help, or even just acknowledge it, because that means you must also listen, understand and acknowledge your own emotional experience. This is to say: people who dismiss other people's emotions are deeply in the abyss of not being able to address their own.

More like this
Why You're Seeing Green Bandanas At Abortion Rights Protests
By Lexi Inks
How To Come Out Online, According To Trevi Moran
By Melanie Mignucci
34 Quotes That'll Inspire You On Juneteenth & Beyond
By Syeda Khaula Saad and Siena Gagliano
Jujubee’s Humble Reminder
By Sam Ramsden
Get Even More From Bustle — Sign Up For The Newsletter