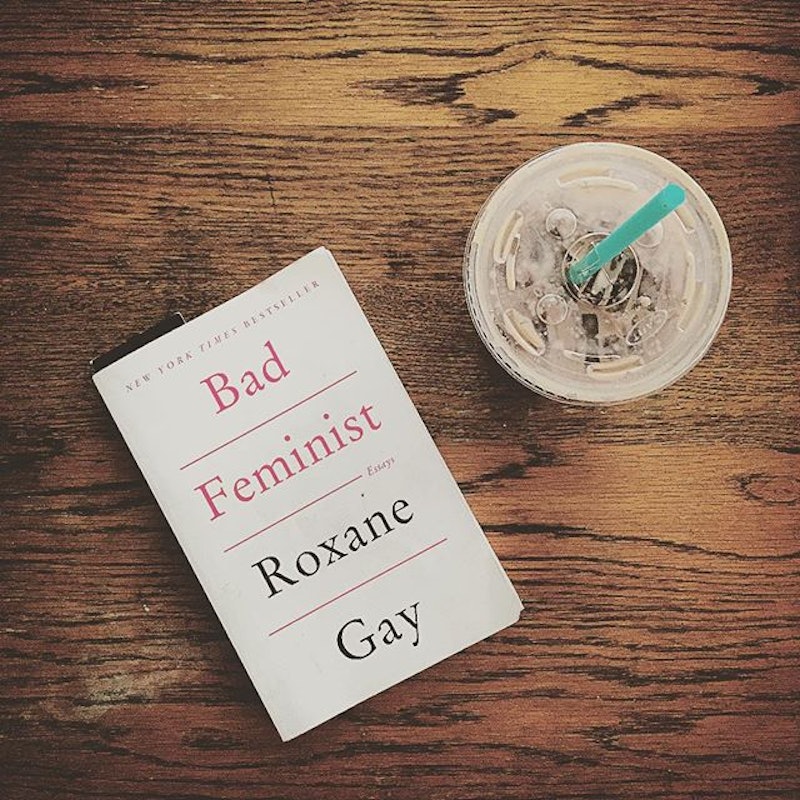 August 5 marks the one-year anniversary of the publishing of Bad Feminist, which means that for the last 365 days, readers have been inspired, challenged, motivated, and validated by Roxane Gay's words of wisdom. Her essay collection gets to the heart of what it means to be a woman, what it means to be a feminist, what it means to be a human, and most importantly, what it is like to deal with those often conflicting interests. And let me tell you, there are few who have said it better than Gay.

Her essay collection is so much more than just Gay's personal opinions and stories. It offers advice without being pushy; it leaves room for comfort while being brutally honest. Bad Feminist strings words of inspiration next to harsh truths you need to hear. It celebrates books and writing while tackling the prejudices in publishing. It addresses issues of sexuality, womanhood, identity, and diversity, both in and out of the context of pop culture. It questions everything and accepts nothing as absolute truth. Throughout, it carries a sense of openness, honesty, and determination. It's hopeful without being sappy, it's humorous without playing down issues, and every unsparing word is carefully thought out and expertly delivered. It is the kind of book that will define this generation.

In honor of a year of Bad Feminist, here are 15 of the book's best quotes:

3. "Sometimes, when you least expect it, you become the girl in the woods. You lose your name because another one is forced on you. You think you are alone until you find books about girls like you. Salvation is certainly among the reasons I read. Reading and writing have always pulled me out of the darkest experiences in my life. Stories have given me a place in which to lose myself. They have allowed me to remember. They have allowed me to forget. They have allowed me to imagine different endings and better possible worlds.”

4. “I have never considered compassion a finite resource. I would not want to live in a world where such was the case.”‌

5. “No matter what issues I have with feminism, I am a feminist. I cannot and will not deny the importance and absolute necessity of feminism. Like most people, I am full of contradictions, but I also don’t want to be treated like shit for being a woman. I am a bad feminist. I would rather be a bad feminist than no feminist at all.”

6. “If people cannot be flawed in fiction there's no place left for us to be human.”

7. “It's hard not to feel humorless, as a woman and a feminist, to recognize misogyny in so many forms, some great and some small, and know you're not imagining things. It's hard to be told to lighten up because if you lighten up any more, you're going to float the f*ck away. The problem is not that one of these things is happening; it's that they are all happening, concurrently and constantly.”

8. “We must stop pointing to the exceptions — these bright shining stars who transcend circumstance. We must look to how we can best support the least among us, not spend all our time blindly revering and trying to mimic the greatest without demanding systemic change.”

9. “Abandon the cultural myth that all female friendships must be bitchy, toxic, or competitive. This myth is like heels and purses — pretty but designed to SLOW women down.”

10. “All too often, when we see injustices, both great and small, we think, That's terrible, but we do nothing. We say nothing. We let other people fight their own battles. We remain silent because silence is easier. Qui tacet consentire videtur is Latin for 'Silence gives consent.' When we say nothing, when we do nothing, we are consenting to these trespasses against us.”

11. "We should be able to say, 'This is my truth,' and have that truth stand without a hundred clamoring voices shouting, giving the impression that multiple truths cannot coexist."

13. “What goes unsaid is that women might be more ambitious and focused because we’ve never had a choice. We’ve had to fight to vote, to work outside the home, to work in environments free of sexual harassment, to attend the universities of our choice, and we’ve also had to prove ourselves over and over.”

14. “We are, after all, supposed to be one nation indivisible. Only if we act as such, might we begin to truly effect change.”

15. “When you can’t find someone to follow, you have to find a way to lead by example.”