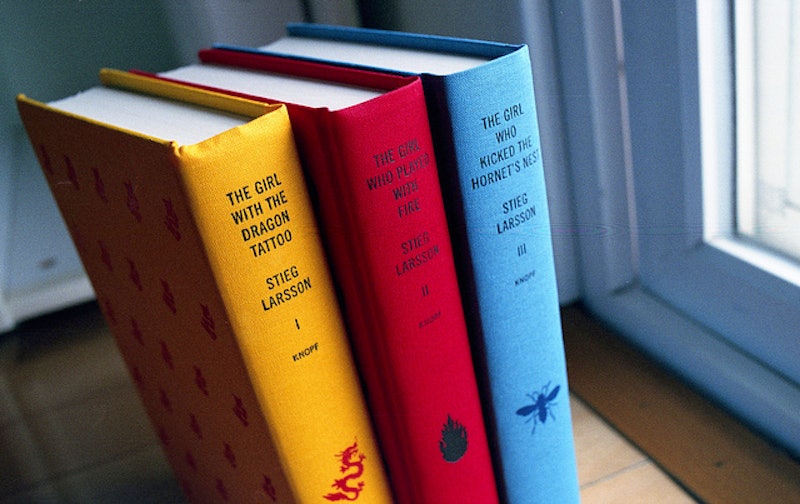 When Stieg Larsson came home from work every night and sat down to write The Millennium Trilogy, did he have any idea of how popular it was going to turn out? This trio of edgy Swedish thrillers has the distinction of being in the pantheon of books that hit the public consciousness hard; The Girl with the Dragon Tattoo is even ranked twelfth on the Goodreads' list of Best Books of the 21st Century. Most of that is all thanks to the character of Lisbeth Salander.

I desperately want the strength that Lisbeth has, her scary sexy punk style, and (most importantly) her ability to survive. She’s the Katniss Everdeen of Scandinavian thrillers (although it could easily be said that Katniss is the Lisbeth Salander of YA dystopian fiction) and fans everywhere rejoiced to hear that Lisbeth is coming back.

The newest entry in the saga, The Girl in the Spider’s Web, won’t be out for another month — but if you can’t wait, and have already gotten as much information on the new book as you could find, take a gander at these 12 thrillers in the meantime. Spanning the genre, these books deal with serial killers, obsessive stalkers, and dangerous pasts, and while they might not feature Lisbeth Salander, they do each feature their own cool lady characters, which is always a good thing.

Throw on a leather jacket and crack one of these awesome thrillers with female protagonists open — just make sure you're done by September!

It would be almost too easy to include Gillian Flynn’s most well known book, Gone Girl. However, Sharp Objects is well worth an entry of its own. After a brief stay in a mental hospital, Camilla Preaker has taken a job at a small newspaper, only to be reluctantly called back to her hometown to report on the murders of two preteen girls. For fans of a short, creepy read, Sharp Objects is the way to go.

The Shining Girls by Lauren Beukes

The Shining Girls begins when Depression Era drifter Harper Curtis stumbles upon a house that can open to other times. After investigating the house, he desides that he’s destined to snuff out all the “shining girls,” who are bright and burning with potential in life. Enter Kirby Mazrachi, the only shining girl who has ever survived one of his attacks. The Shining Girls is an interesting mix of thriller and magical realism, with an added bonus of exploring the many ways women can be different and special. Come for the strange plot, stay for the awesome female protagonists.

Night Film begins with the death of the beautiful and enigmatic Ashley Cordova in an abandoned Manhattan warehouse. Although her death is ruled a suicide, disgraced investigative journalist Scotty McGrath has decided to look into the case. His investigation leads him to a crumbling family dynasty headed by Stanislas Cordova, a former cult-horror film director who also carries the distinction of being the one responsible for Scotty’s fall from journalistic grace. Now driven by a sense of revenge, Scotty goes deeper into Cordova’s world — and this time, he might lose more than just his journalistic integrity.

You by Caroline Kepnes

When aspiring writer Joe Goldberg walks into Guinevere Beck’s bookshop, he finds himself thinking of nothing else but gaining her love. After using both Facebook and Twitter for information on how to become her perfect man, Joe expertly avoids the friend zone and goes from stalker to boyfriend. You is 500 Days of Summer rewritten as a psychological thriller, it's Misery starring Tom Hanks and Meg Ryan, it’s a twisted romance that reminds you that no one has to die for a book to be terrifying.

The main character of Smilla's Sense of Snow is a lot like Lisbeth Salander, before she even existed. The product of a tumultuous union between an Inuit Greenlander and a Danish physician, Smilla Jaspersen is a scientist who specializes in snow and ice, leaving her with an almost psychic intuition towards it. Instead of becoming a new Batman villain, Smilla turns her talents towards solving the mystery of the death of a six-year-old boy she befriended, uncovering several incredible and dangerous secrets along the way.

The Book of You by Claire Kendal

The Book of You centers on Clarissa, a woman who is becoming more and more frightened of her fellow coworker, Rafe. Trapped by society’s expectation that she always be polite when it comes to male attention, she can’t seem to get rid of him. He stuffs gifts into her mailbox, he always seems to show up at all of her favorite places, and after one awkward (and extremely trigger warning-y) night, she desperately wants to never see him again.

Her only solace is jury duty (so you know the situation is dire), and after realizing that the circumstances of the trial closely mirrors her own, she sets out to stop him once and for all. It’s a thrilling deconstruction of the “nice guy” concept, breaking it down to show that it’s less about the love of a woman, and more about the love of having power over that woman.

Portland Detective Archie Sheridan has had his life ruined by Gretchen Lowell, a beautiful serial killer who once kept him captive for ten days, torturing but not killing him. As his obsession for Gretchen grows (as does his attraction to her) and when a new killer rears their ugly head, Archie must put aside his issues in order to catch them. It’s like a gender bent The Silence of the Lambs.

The Silence of the Lambs by Thomas Harris

Surprise! You didn’t think I would forget this one, did you? For fans of classic thrillers that feature kickass lady protagonists, The Silence of the Lambs is here for you. FBI Academy student Clarice Starling is given a unique opportunity to interview the incredibly dangerous and incredibly refined Dr. Hannibal Lecter, a serial killer with a penchant for eating his victims. She’s on a quest to find the equally terrifying Buffalo Bill murderer, a character based on real life killers Ed Gein and Ted Bundy. Clarice is brave, quick-witted, and one of the few people who can talk to Hannibal Lecter without fear.

Dianna Madden is The Girl in 6E, a recluse who has not left her apartment in over three years — and thanks to Amazon Prime and pre-packaged Jenny Craig meals, she never has to. On top of living an introvert’s dream, Dianna works in the virtual sex industry as a camgirl, and a wildly popular one at that. What is she hiding from in the real world? Turns out, she’s not locking herself in for her own safety… but for the safety of others. The Girl in 6E is a uniquely sexy thrill ride, like a female Dexter, if you will.

A small town in Georgia is turned upside down when a young college professor is found brutally murdered in a diner. The news grows worse when town coroner (and pediatrician) Sara Linton reveals the true terrible extent of the murderer’s work during the autopsy. While the murders start piling up, and the county’s sole female detective (and sister of the first victim) is on a quest for revenge. Only Sara truly knows how to find the killer … but in doing so she’ll reveal a terrible secret from her own past.

Blindsighted is the beginning of a series currently spanning eleven books, so you won’t have to worry about having the same book hangover as when you finished the Millennium Trilogy for a good long while.

The Never List centers on Sarah and Jennifer, a pair of best friends who kept a list of things that they decided they would never do for the sake of safety, dubbed (surprise surprise!) “The Never List”. On the one night they violate the list, the girls end up kidnapped and held in a cellar for three years by a psychopath with a penchant for sadism. (Because, of course.)

The Ice Princess by Camilla Läckberg

When Erica Falck returns to her hometown of Fjällbacka, Sweden (type that five times fast!) after the death of her parents, she is greeted with yet another tragedy: the suicide of her best friend Alex. She teams with Patrik Hedström, a handsome police detective, in order to solve the mystery of why Alex — a beautiful, happy woman by all accounts — decided to take her life. Of course there’s romance, murder, and someone willing to kill in order to cover up a dark secret. The Ice Princess is perfect for those who love the European setting of The Girl with the Dragon Tattoo, but doesn’t want to sacrifice any of the grit.