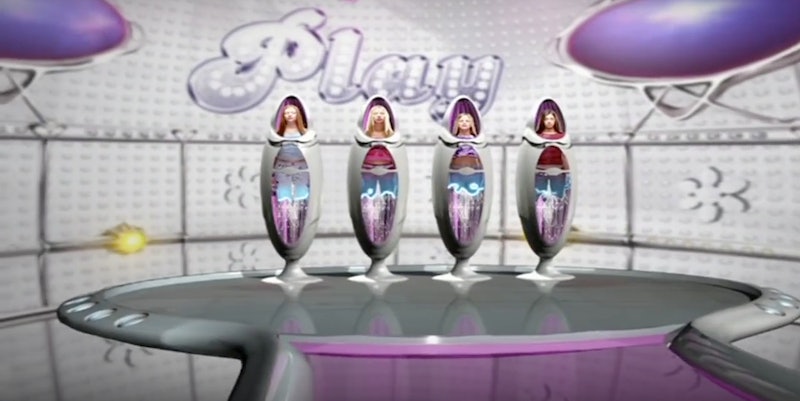 If you were a tween in the early '00s than you remember the sugary pop sensation that was Play. As a four girl music group from Sweden they brought a sense of girl power back to the United States that we had so desperately been craving since the disbanding of the Spice Girls. While their success as a group may have been somewhat short lived, no one can forget Play's hit song, "Us Against the World." As the theme song of our adolescence, it was featured virtually everywhere, from Mary-Kate and Ashley's Holiday in the Sun to Disney's Lizzie McGuire. While the song perfectly encompassed that early '00s sound, the music video for the single was even better.

From the hair styles and outfits to the major butt kicking girl power, this music video gives me some major feels as I reminisce on my middle school years. Though times have certainly changed, and most of us have surpassed our awkward tween stage (thank goodness), we can all still appreciate this tune that defined our childhood. Get ready for some major nostalgia as I go through the totally '00s moments from Play's "Us Against the World," because this music video is a true gem.

Nothing said fierce better in the early '00s than a sassy strut down a school hallway. From the beginning, you know these girls mean business.

2. Overestimated Idea of What the Future Will Look Like

What was the fascination with space and aliens in early '00s music videos? Sadly, the future does not actually have flying cars and teleportation. Yet.

3. Monotoned Outfits Right Down to the Shoes

Back in the day, it was perfectly normal to match your shirt to your pants... and your shoes. Then Lizzie McGuire came along and changed the fashion game forever.

It wasn't about sitting though; it was about looking cool doing it. And these bright orange chairs certainly did the trick.

4. Hands In For BFFs

Do I even have to explain this one? This is so totally '00s.

5. Zoomer Zuppies Were All the Rage

Who needed a real dog when you could have robotic one? This electronic toy was definitely at the top of your Christmas list.

6. Stick On Rhinestones From Claire's

The mother of all tween jewelry stores. We all remember buying these stick on jewels to bedazzle our face for the school dance.

Not only do the girls act like butt kicking ninjas in this music video, but they also save a bus load of scared boys in the process. Talk about female empowerment.

8. Literally Everything About This One Picture

I have never seen so much '00s fashion in one picture. From the over-crimped hair to the sequined tube top, these girls have it down to a tee.