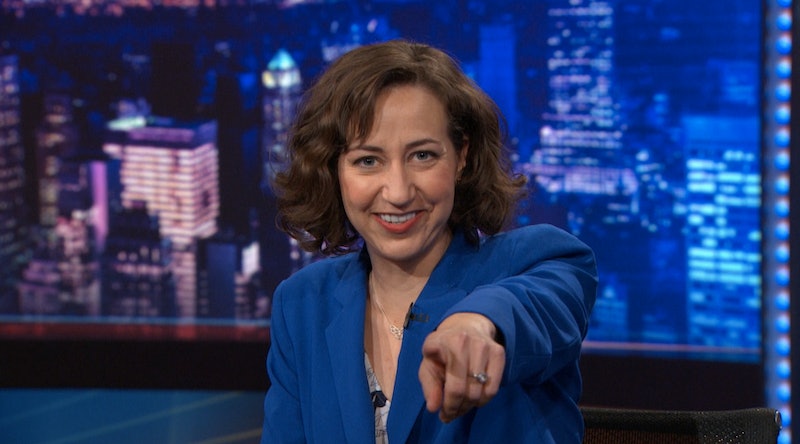 This is a difficult week for Daily Show fans, because this just so happens to be the week we day goodbye to Jon Stewart. Revisiting his best moments is imperative, and this includes celebrating his correspondents, which includes Kristen Schaal, The Daily Show's "Senior Women's Correspondent" since 2008. Of course, she's lived up to her title, and has been a vital voice for women's issues on the show. The Daily Show has featured some incredible female correspondents over the years including Samantha Bee and Jessica Williams, but it is Schaal's unique and absurd voice that made for some particularly enlightening discussions with Stewart — so, in honor of Thursday's finale, I dug up Kristen Schaal's best conversations on The Daily Show .

Schaal is now super busy in Hollywood, as she's currently co-starring with Will Forte in FOX's The Last Man on Earth and providing the voice of Louise Belcher on Bob's Burgers — but, every time she appeared on The Daily Show, it was a treat.

On the show, Schaal would cover important topics like the gender wage gap, the Republican party's quest for "the lady vote" during election years, and the most pressing issue today — the Dad Bod.

OK, OK — I kid. Kind of. But in all seriousness, Schaal always had a great rapport with Stewart, and — with her distinctive voice and playful rhythm — their conversations were one of the best parts of the already great Daily Show. As we bid goodbye to Stewart on Thursday, it is the perfect time to visit his best conversations with Schaal.

You thought I was kidding, didn't you? Schaal brilliantly called out society's double standard in celebrating the average man's body while still being hypercritical of the average woman's bodies. She and Jon rip up copies of Men's Health in celebration of the fact that six packs on dudes are now old news, and points out that women on Fox News rejoice over the beer belly. "If that women had a belly at all, they would not let her on that show."

The Future Of Gender Wage Equality

"Did you know that half the country is women, and more than half the money goes to men?" Schaal reminded us that President John F. Kennedy signed an Equal Pay Act in 1963, and just how backwards and unfair the contemporary wage gap is — while also teaching us about the systemic forces at play.

Schaal brilliantly satirized the sexualized costume industry and the toxic expectation of women every Halloween. She designed her own line of sexy costumes for men, which included "Sexy Hollywood Producer Who Hires Women Over 40 For Meaningful, Age-Appropriate Roles."

Schaal is "dewier than the dewy decimal system,"taking on the "Princeton Mom" who said that women should be looking for husbands in college. She nails the destructive pressures of the "biological clock," and even teaches a killer spin class and a cute group of kindergarteners. Repeat after me: "Men are terrible creatures, get one as soon as you can!"

The Single Vs. Married Woman Vote

Once again, Schaal takes on the devil's advocate position on the topic of married women voters, saying that as soon as her handsome groom carried her across the threshold, she felt "concerned for America's future."

Using her experience as a standup comedian, Schaal hammered home the fact that Republican policies towards women's health are so absurd, they're basically jokes that write themselves: "I just flew in from Virginia and boy, is my vagina tired from the transvaginal ultrasounds!"

While I love both Bob's Burgers and The Last Man on Earth, hopefully Schaal will still find time in her busy schedule to teach Trevor Noah a thing or two about women's issues when The Daily Show returns with Noah at the helm.