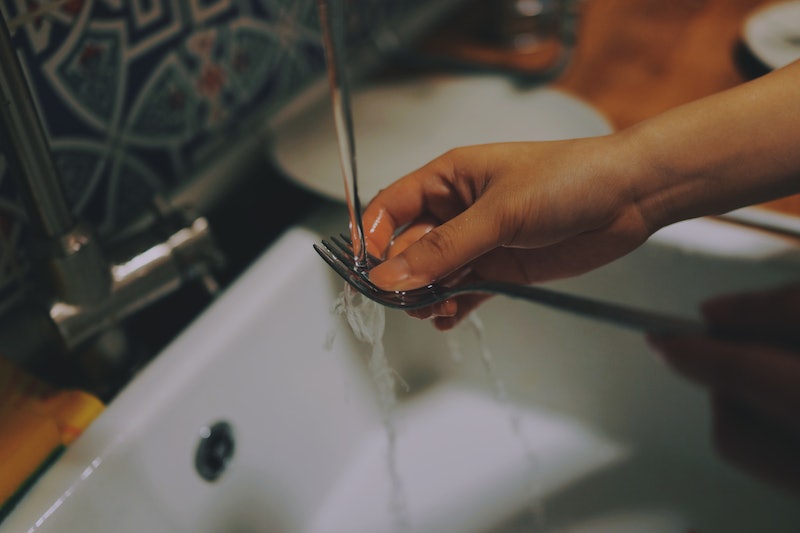 Even if you're a die-hard germaphobe — you Purell your hands all day at work, you use your knuckles (rather than your fingertips) to steady yourself on the subway, and you would never dream of getting on that cycle at the gym without wiping it down first — you probably don't think much about how dirty restaurant silverware is. You know, the silverware you not only touch with your bare hands, but use to scoop up food and put directly into your mouth. Have we clean freaks perhaps been overlooking the dirtiest item of them all?

If you're giving the forks at your favorite cafe the side eye now, don't worry — you're not just being paranoid. There are plenty of reasons to be a bit cautious about what we put in our mouths. Researchers at Ohio State University Center for Clinical and Translational Science conducted studies proving that odds are high that a gastroenteritis-causing virus is present on all public silverware, even after they've been washed and dried. But before you panic and swear off dining out forever, take a breath. Donna Duberg, assistant professor at Clinical Laboratory Science at Saint Louis University, told Women's Health that this all sounds scarier than it is. She notes that it's not realistic to think we can kill off all the bacteria and viruses in the world. We just have to learn how to reduce the number of germs that are entering our system.

So how filthy is your brunch fork, really? Read on to find out, and learn what you can do to prevent restaurant germs from ruining your life (or your evening).

Just How Dirty Is Your Restaurant Silverware?

The Ohio State study found that it didn't matter whether silverware was hand-washed or run through a dishwasher; the murine norovirus (MNV-1) — which is the cause of 90 percent of epidemic gastroenteritis cases — lived on. Although the plates and cutlery put through the machine came out a tad cleaner, they still held remnants of the nasty stuff. The study claimed that norovirus, Escherichia coli (E. coli K12) and Listeria innocua were left on the cutlery, ceramic dishes and drinking glasses after washing, too. Those names look scarier than they actually are — not everyone who comes into contact with the norovirus instantly becomes ill — but they do pose a threat to your immune system.

So why doesn't washing remove all the germs on silverware? Dairy food items (especially dense ones like cream cheese) cause the germs to stick around longer. Along with some other foods, milk products act as a barrier between silverware and cleaning products, neutralizing the powers of soap and disinfectants. Even if the restaurant is following cleanliness protocol to the highest standards, things like this simply can't be helped.

Do We Notice When Our Forks Are Filthy?

Last year, a Consumer Reports survey interviewed over one thousand individuals, asking for the feedback on the cleanliness of the restaurants they visit most often. Dirty utensils were the number one issue that restaurant patrons complained about — 76 percent of respondents said the forks, spoons, and knives were not up to acceptable standards. While this research didn't touch on the specifics of the germs that appear on your silverware, it did prove that this is a real issue in the food industry.

It also doesn't take much effort to find online forums run by folks who have worked in the restaurant biz before, who cart around a whole cutlery set in the trunk of their car in order to avoid using the silverware offered by the servers. This is obviously extreme, but it does point to the fact that we're becoming more and more aware of the potential funk that is leftover on that fork. Strangely enough, though, a study conducted by Harris Interactive found that only 25 percent of customers would actually speak up to management about such an incident. The same study found that the 75 percent of folks who said they would complain were only somewhat likely to call over their server.

Does This Germ Exposure Have Lasting Effects?

Of course, if you do end up catching the norovirus, the gastroenteritis disorder that it causes is anything but pleasant. Symptoms include nausea, vomiting, and severe diarrhea — for days. It's not easy to get over and, even worse, it's extremely contagious. But Duberg says this is a worst-case scenario and the odds this will happen to you aren't that high. If you're feeling at all under the weather, avoid eating out; your immune system is vulnerable, and if you go in already susceptible to germs, you could get sick more easily.

But that doesn't mean we shouldn't be concerned with the silverware we're given when we're feeling well, which brings us to the final point...

Can You Do Anything To Avoid Dirty Cutlery?

A little common sense goes a long, long way on this front. If you walk into a hole in the wall restaurant that feels grimy and is emitting some serious smells, think twice before you sit down and lick your fork clean. Duberg suggests you find somewhere else to eat if you enter a restaurant and can smell the bathroom more easily than you can the food itself. Examine the tables, too — if the tops are sticky, don't be afraid to ask your server to wipe it down before she brings out the cutlery and plates. Bacteria thrives on surfaces that aren't properly cleaned, and where bacteria live, viruses follow. You definitely don't want your silverware anywhere near that kind of tabletop.

Also take note of what materials the server is using to clean everything. If the rag they're using to wipe tables down is clearly gnarly and full of dark stains, you have a right to ask them to grab a new one, as they're taking care of exposed surfaces. One of the reasons we don't normally speak up as customers is because we don't want to be a pain, especially if we've worked in food service before. But you can ask in a friendly way so you don't come off as the jerky customer everyone will gossip about in the back of the kitchen — and don't have to deal with unnecessary germs while you chow down, either.