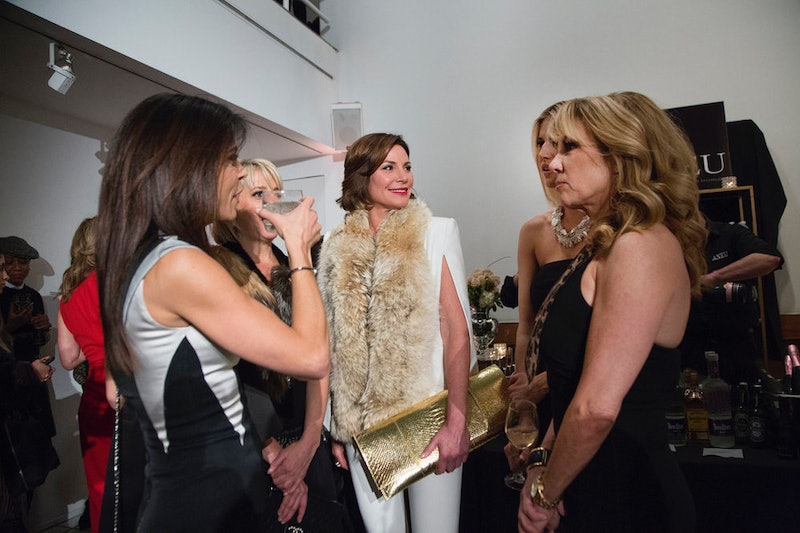 Drama always seems to follow The Real Housewives of New York City whenever the cast attends a fashion show. Tuesday night's episode of RHONY was no different. From the moment Bethenny Frankel and Ramona Singer caught up with each other at Sonja Morgan's fashion show, it was on like Donkey Kong, and the pair launched into a brawl that seemed to have been in the making all season.

To be fair, Ramona really set herself up for the fashion showdown that was about to go down. When she greeted Bethenny, show pointed out how funny it was that they were both wearing dresses that went down to below the knee. Bethenny did not find this hilarious. Not. One. Bit.

That's because she has accused Ramona of stealing not one but two dresses from wardrobe when she appeared on Bethenny's daytime talk show, which is kind of a rude thing to do, don't you think? So when Ramona tried to make light of the situation, Bethenny was not having it, and I totally couldn't blame her.

Bethenny promptly rolled her eyes at the idea of Ramona throwing a New Beginnings Party, as I'm sure many of you did at home as well. That's because she found the idea of Ramona turning over a new leaf completely hypocritical, not just because of all of the Singer Stinger's antics this season — from acting like she was the queen of Turks and Caicos to being openly dissatisfied with the selection of men at Bethenny's Skinnygirl party during last Tuesday night's episode — but also because of the rumors Ramona has been spreading about Bethenny.

Apparently something we didn't have the displeasure of seeing during the Housewives' trip to Turks and Caicos was when Ramona told Heather that Bethenny had cheated on her first husband. Learning about Ramona not just talking behind Bethenny's back but saying such nasty, untrue things is what really made Bethenny so irritable at the fashion show and pretty much done with Ramona at this point.

Bethenny is totally right here. One of the most frustrating aspects of this season has been watching Ramona constantly say how much the trauma of what happened with her marriage to Mario has changed her into becoming a less intense and more empathetic person. However, we have seen time and time again this season that just isn't true. Even during the fashion show, Ramona flipped out when Bethenny brought up the alleged dress-napping, making up what seemed to be excuses for her behavior and the aftermath of the incident. Deflecting responsibility and guilting others into forgiving her is basically Ramona's calling card.

Well, Ramona has one episode left of this season of RHONY to prove once and for all that she has changed. Next week's episode is the season finale, so let's just hope it really does show a new beginning for Ramona, or else there's going to be A LOT to talk about at the reunion.