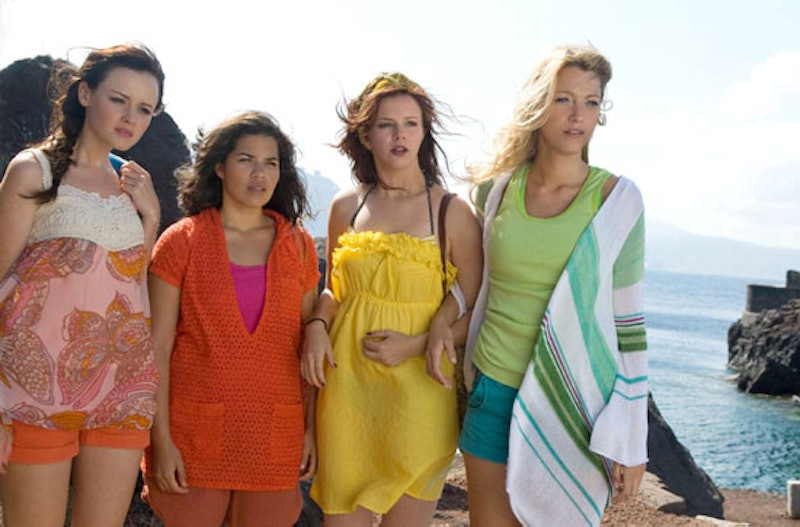 Now, put down your torches and pitchforks and let me explain. The problem with The Sisterhood of the Traveling Pants 2 is in the fact that it basically combines the last three books in the series, and that makes for a pretty confusing plot. It's well-intentioned, of course... but it just doesn't work.

Still, aside from Bridget's tearjerking episode about reuniting with her grandmother, everyone's plot fails to impress. While Carmen showcasing confidence and broaching self-discovery is great, I really couldn't care less about her British beau and constant whining. Tibby having intimacy issues? What a twist. And really, Lena, you're gonna go back to Kostas? Dude can't even pronounce your name right.

Whatever, here's a chronological recap of the madness.

1. We Start Where We Left Of...With Carmen Wearing Jeans To Her Parent's Freaking Wedding.

This girl has no concept of "semi-formal," I swear to god.

2. Kostas Showing Up To His Ex's Funeral With His New Allegedly Pregnant Wife.

I know things are different in Greece, but proper social decorum would suggest this is a dick move.

3. Somehow Carmen Isn't In The Know That All Her BFFs Has Summer Plans.

And seriously, Bridget, an archaeological dig, since when did you show a passion for archaeology?

A world of no.

6. Lena Is Going To RISD On Scholarship.

Yeah, no, this seems fair.

7. The Way Brian Says "I Love You" And Then Romantically Pulls Off Tibby's Wig.

It's something we've all dreamed of before.

8. The Fact That Tibby's Pregnancy Scare Plot Should've Ended At "The Condom Broke."

"Oh, that sucks, let me go down to one of the 20 drug stores on my block and get some Plan B." END OF STORY.

"What? No. Why would digging up people who died thousands of years ago get to me? Stop trying to ruin this. You're bumming me out, man."

Seriously, though, did Bridget dig these up on one of her archaeological digs?

11. Wow, That No-Washing Rule Is Really Taking Its Toll.

Pictured: the "magic" from the pants.

12. Tibby's Post-Sex Freak Out After Being Surrounded By An Onslaught of Babies."

I could go six months without talking to a man, let alone anyone else — but this is still my expression after walking around Greenpoint on Stroller Sunday.

13. She Then Prays To Get Get Period.

While wearing the pants. That they never wash.

"I'm just going to finish fixing my car in the dark."

OMG, WHAT IS WITH THESE PEOPLE?

16. New Sister Character Grabs Dinner With Tibby To Ask If She Can Boink Her Ex.

17. Brian Then Shows Up To His Ex's Parents' Anniversary Party With Her Friend's 16-Year-Old Sister As His Date.

But I'm sure you could deduce that simply from looking at this picture and seeing that he's wearing a fedora.

"I just haven't gotten the nerve to ask over all our romantic picnics and giggle-filled dinners."

19. "That Night I Think I Felt A Little More Than I Bargained For. Maybe I Thought I Was Being Punished For Feeling Too Much."

These are the bangs that I want.

20. "Hey Lena, Was Feeling Really Shitty About How You Always Ignore Me So I Stole Your Ugliest Pair Of Jeans."

21. "Oh, well, thank God for e-mail! You can have an entire relationship and not even look at somebody."

I know, it's my favorite.

More like this
Then Vs. Now Photos Of The 'Enchanted' Cast In 2007 & The Sequel's Stars In 2022
By Marina Watts
See 'Twilight' Stars Together Again For A Sweet Cullen "Family Reunion"
By Stephanie Topacio Long
'The Princess Diaries 3' May Go Ahead Without Anne Hathaway
By Darshita Goyal
Stormzy Celebrates His New Creative Freedom In “This Is What I Mean”
By El Hunt
Get Even More From Bustle — Sign Up For The Newsletter