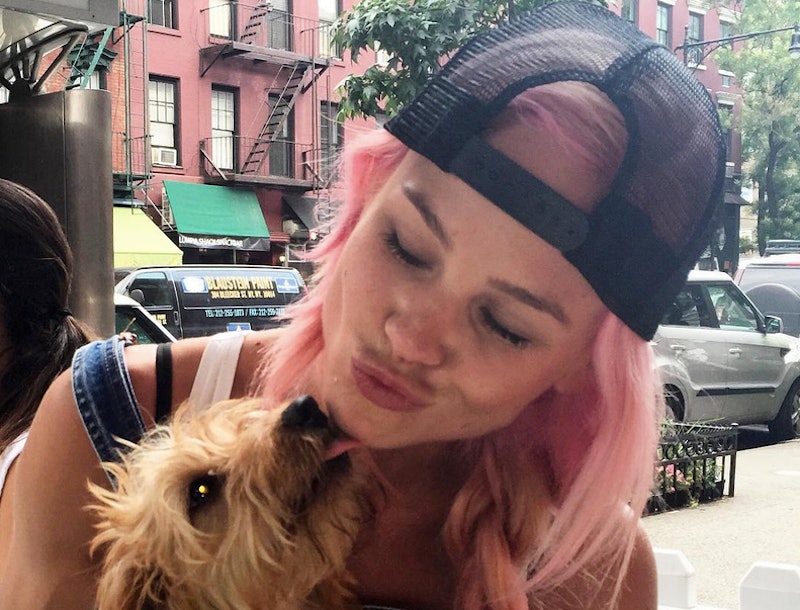 Ever since Meghan King Edmonds strolled into the Real Housewives of Orange County's kooky universe at the start of Season 10, she has shaken things up in a major way. She's 30, outspoken, has Midwestern roots, is happily married to former MLB player Jim Edmonds, and has a new small business selling trucker hats. I'll write it again: Meghan King Edmonds' website sells trucker hats for women. Any questions? Yes, about a thousand of them? Well, then, let me get cracking on some answers.

Edmonds partnered with the company called Mother Trucker & Co, which is owned by mothers who make these hats, to promote the product #Hashtag Hats. The name says it all. These are trucker hats that are specifically designed for women, which pretty much means they're smaller and "don't have all that extra space on top of the cap," according to the website. And, yes, each Hashtag Hat features a different hashtag, meant to be worn by "women with attitude and voices." The hashtag hats you can currently purchase include the phrases #CancerSucks, #OverIt, #CoolStepMom, #ClassyAF, and #BonusMom.

Look. I'm not sure how these will sell in a post-trucker hat world, but I'm also not in the business of predicting trends, so I'll leave that for someone else to tackle.

What inspired Edmonds to partner with this cool business is what really kicks ass. Fans of the show know she is damn proud of being a stepmom to Jim's four children. She'll defend the importance of her role to anyone who challenges it (and fellow O.C. Housewives Vicki Gunvalson and Tamra Judge have done just that). Her stepdaughter Lauren, who recently graduated Arizona State University, is also her partner in the project and it really sounds like they are out to do more than just churn a profit. One-hundred percent of the money they make on their black #CancerSucks hat is being donated to fund colorectal cancer research, in a direct tribute to Jim's ex-wife, Lauren's mom, and Meghan's friend LeAnn Edmonds Horton, who died from colon cancer just a few weeks ago.

#Hashtag Hats also sells a pink version of the same hat and 100 percent percent of the profits goes toward breast cancer research.

This isn't about growing a billion dollar fashion empire; Edmonds is doing her part to help her family heal from Edmonds Horton's death and help out in any way she and Lauren can.

Don't worry, though. This partnership isn't preventing her from putting Gunvalson and Judge in their places about what it means to be a stepmom (aka a #CoolStepMom):