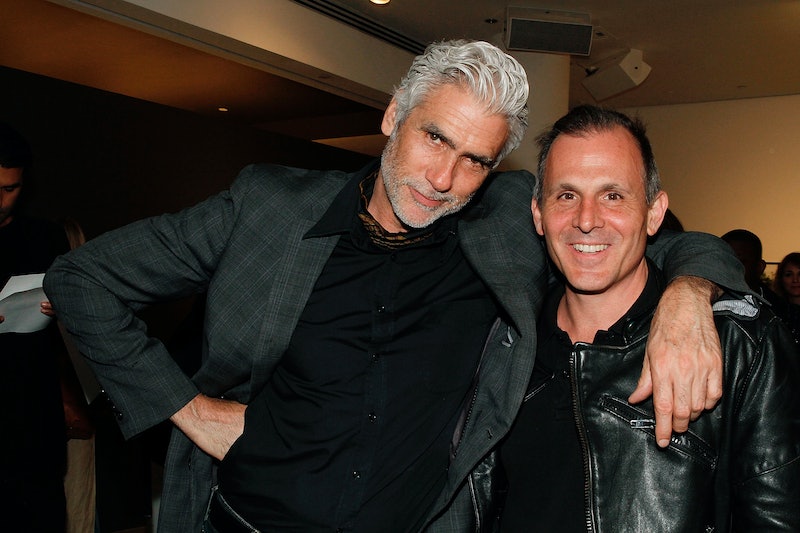 The notion of "fashion photographer" usually conjures up, among other things, images of models, magazine spreads, and posh parties. Homme Less , the documentary about fashion photographer Mark Reay, illustrates that all of this is certainly true, and yet all is not as it appears. Reay also happened to be homeless, as the title cheekily implies, while his career shooting editorials for magazines like Dazed was in full swing.

Although Reay appears polished and pulled together — I mean, he rocks a suit and tie like nobody's business and even works out in a gym — the film makes it very clear that at the core of his American Dream is, essentially, a nightmare. While he did technically live in the East Village, which isn't a bad zip code by any means, he was actually squatting on a rooftop for five years. The trailer mimics Reays alternate universes, fluidly flipping between images of backstage photoshoots with beautiful young models and an uncomfortable close up of the photographer shaving in a dingy public bathroom.

The film has already won several awards since it made the film festival circuit beginning last year, and it opens to the public in New York on Aug. 7 at at the IFC Center.

This all goes to show that things are rarely as they seem, especially in the age of social media stardom. The Cut's recent story about the how young adults use Instagram to try to fake "happy" is a testament to that, but as this documentary proves, it's not just college students who feel the pressure to be perceived as perfect.

On the Homme Less website, words like "unfiltered" and "facade" are used to describe the film. They seem to magnify the fact that perception is often valued more than reality.

Homme Less captures a raw and unfiltered moment in time, our time, and raises the question of how far are we from losing everything, even our homes? How often do we have to pretend that everything is fine in order to keep up the facade of being a well-off member of society? And how far do we go to take the financial pressure off our shoulders to live a more carefree life, a life we aspire to live?

If Homme Less doesn't make you think twice about everything you've ever pinned or every Instagram picture you've ever tagged "#goals," I don't know what will!

Watch a trailer for the movie below, and head to the theater this weekend to check out the film.