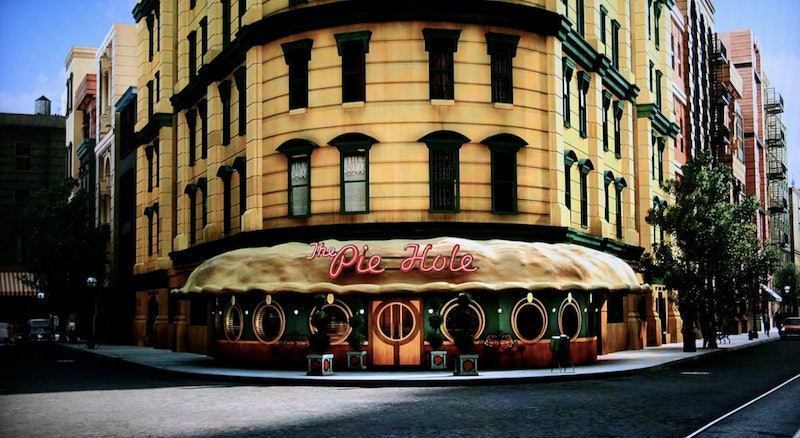 The most magical show to have ever aired on television will always be Pushing Daisies. The two-season wonder gave me so much to love, from the sweet romance between piemaker Ned and Chuck to the whimsical narration and the show's commitment to intricate Alfred Hitchcock homages. There is nothing I miss more than the Pie Hole though. Ned's pie shop was every bit as much of a character as any of the humans on the show. It was so colorful and full of energy and life that I could practically smell the pies. I wish more than anything that Pushing Daisies ' Pie Hole really existed.

Walking through the doors would be like stepping into a place in between times. I have always imagined the Pie Hole exists on a street somewhere between a Wes Anderson movie and Amélie. Hanging out there would be a dream come true. Even though I know the Pie Hole is completely fictional, a girl can dream, can't she? And trust me, these dreams are sweet and full of pies and mystery.

The Pie Hole is a truly special place, and, as much as I love revisiting it every time I re-watch the show, I still think it should exist. Here's why I think everyone should get a chance to visit the Pie Hole at least once.

1. The Pies Would Be Delicious

I have to get the obvious out of the way first. Ned's pies are supposed to taste like no other pie because the rotten fruit is revitalized with a single touch. I imagine Ned's pies would be so fresh and unique that no one could ever duplicate them. As sad as I am that he can never taste his own handiwork, I would still like a big slice of strawberry pie.

2. The Employees Are The Most Intriguing People

There would be nothing better than grabbing a booth, petting Digby, and eavesdropping on Ned, Olive, Chuck, and Emerson. They are all so charming, but also full of mystery. Trying to piece together their stories would be as much of a treat as a slice of pie. Mostly, I just want to listen to Olive talk forever.

3. It Would Be A Home Away From Home

The Pie Hole is literally shaped like a pie. Its roof is a crust. Imagine walking past a place like that on the street. Not stopping would not even be an option. You would have no choice but to go inside (and the decor in there would not disappoint).

5. The Possibility Of Falling Into A Mystery Would Be Very Real

I have always had the desire to be an amateur detective, and the Pie Hole always has a mystery going on. The potential to fall into a spectacular story would be very real. What more could anyone ask for than pie and adventure?

6. It Would Prove Magic Is Real

I'm not talking about Ned and his special abilities. Just the Pie Hole itself is a slice of magic. To know that a place so bittersweet, earnest, and eccentric existed in the world would affirm my belief in the impossible. Finding the Pie Hole would be like stepping through the wardrobe into Narnia or buying a ticket to Hogwarts. A place like the Pie Hole hums with possibility constantly, and, if it was real, the world would be just a tiny bit better off for it.

If the Pie Hole was real, then Ned, Chuck, and the rest of the gang's stories never would have ended. They would still be leading their unusual lives, and my favorite show would still be on TV. That would be the greatest gift of all.

The Pie Hole truly is one of the most beautiful places I have ever seen, and I don't care if Emerson would think I'm lame. Every time I rewatch an episode of Pushing Daisies, it feels very, very real to me.

More like this
The Office Lego Set Includes All Your Favourite Dunder Mifflin Characters
By Sam Ramsden
Here’s When 'She-Hulk' Takes Place In The MCU
By Brad Witter
The 'PLL: Original Sin' Season Finale Finally Revealed A’s Identity
By Alyssa Lapid and Kadin Burnett
How Marvel’s 'She-Hulk' Changes Her Comic Book Origin Story
By Brad Witter
Get Even More From Bustle — Sign Up For The Newsletter