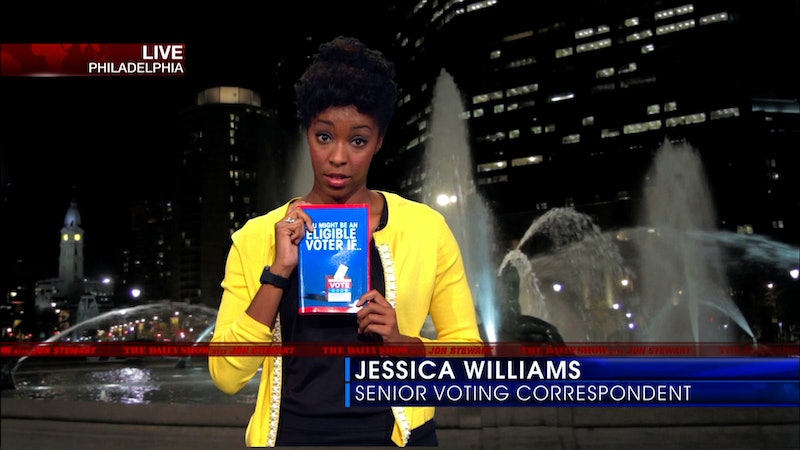 The Daily Show with Jon Stewart ends this Thursday, and part of Stewart's magic wasn't only his impassioned hosting but also the community of correspondents with whom he created comedy magic. One of the best correspondents in the entire show's run, Jessica Williams, as a woman of color, has an important point of view, and brought to all of her segments intelligence, passion, and creative takes on all the brutal stuff that's out there. Williams and Stewart have a great chemistry, and he almost always breaks during their exchanges, laughing at her jokes. She has brilliantly covered important topics and women's issues, including abortion rights, street harassment, and issues involving race and identity.

Many were vouching for Williams to take over the show's hosting duties, but at only age 26, she said on Twitter back in February that she did not feel like she is ready for such a big responsibility. (She is the show's youngest-ever correspondent, joining the show fresh out of college at 23 years old.) Thankfully, she will be sticking around The Daily Show when Trevor Noah takes over, along with all of the current correspondents, so we still have a lot to look forward to in seeing her on The Daily Show and beyond.

Still, it's worth looking back at her time with Jon, aka some of her greatest hits:

This segment is now considered legendary, and rightfully so. Williams takes on the McKinney, Texas pool party that was yet another instance of police brutality. Williams presents the "McKini," a bikini over bulletproof gear, that sadly, seemed kind of necessary.

In this sketch, Williams' cannot get Jordan Klepper to take her seriously. Despite the wisdom of her words, Klepper (as the devil's advocate) only takes Stewart's regurgitated Williams statement seriously when discussing the connection between the Confederate Flag and racism. "I just said what Jon said, before he said it, and from the actual experience of someone who's experiencing it," she says, "For some reason, black people need a white person to get their message out." Williams goes on to hire a "helper whitey" and a hilarious, incisive montage ensues. Classic Williams.

"Sexism: Does it still exist?" Stewart jokingly asks, and he cuts to Williams on the field, exposing the realities of street harassment. Williams talks to a room full of women and discuss how safety of women is often compromised while walking down the street, featuring women exploring how this is a universal issue for all women.

"Jessica, are you saying that women spend every day navigating an obstacle course of potential sexual menace?" Klepper's "bro" character asks, "Yeah, pretty much," she answers. Williams explains how going to a college party as a woman is barely a party at all.

Williams puts Fox News on blast for the irony of them disrespecting the black community for being "irresponsible," and then criticizing Jay-Z for his drug dealing in the past even though he has since become clean. "Jay-Z is the guy they say all black guys should be, but to them, he is still just a crack dealer," she explains. She always has that perfect gut-wrenching one-liner.

Williams takes on Romney's notorious "47 percent" speech, in which he claimed that 47 percent of voters “who pay no income tax” don’t take “personal responsibility…for their lives." Williams, along with Latino correspondent Al Madrigal, explain just how out-of-touch and insulting those comments really are. And they do it pretty darn perfectly.

Thankfully, we get to keep Williams' candor on The Daily Show. Here's hoping she finds a similar informative, yet hilarious rapport with Noah, too.