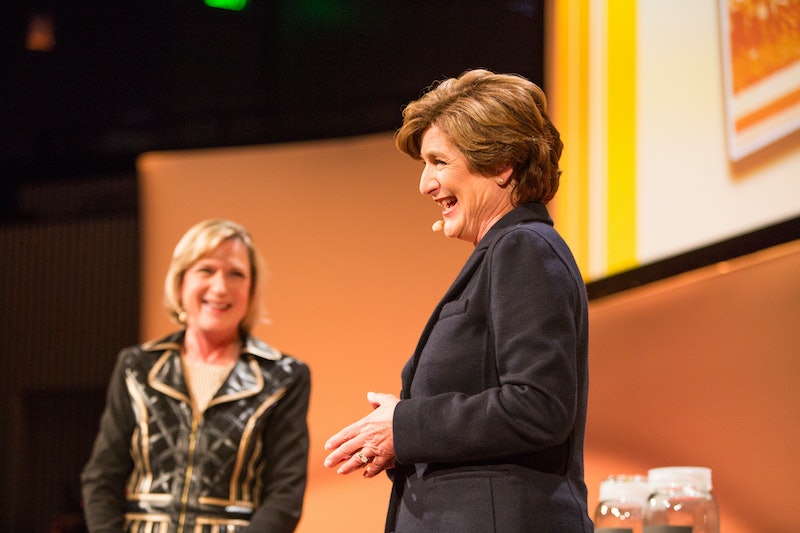 Succeeding seems to be in Denise Morrison's DNA. Or, at least, that's what you'd think when you look at her family: Morrison herself is the CEO of the Campbell's Soup Company, and her sister Maggie Wilderotter is the CEO of Frontier Communications. Her father was an executive at AT&T, too — and, according to the TED talk she delivered alongside her sister on Thursday at TEDWomen in San Francisco, he instilled in her a sense of responsibility and purpose at a young age (she seems to have done a pretty good job with those things, by the way). Morrison has put those lessons into perspective, and passed them on as wisdom: "We're strategic about brands and strategic about companies, but not strategic about ourselves," she said on stage.

Unsurprisingly, as she's ascended to the top of the corporate ladder — with stints at Pepsi-Cola, Nestlé, and Nabisco before taking the reigns at Campbell's in 2003 — she's learned a thing or six billion along the way about how to kill it in the career arena (you don't become Forbes ' 81st Most Powerful Woman if you don't have some gospel to spread). I spent a few minutes with Morrison in the green room before her TED talk to find out exactly what young women building their careers need to know.

1. Change your approach to networking

"Networking can be a little intimidating to people. They think of the paradigm, 'Oh my god, I've got to build a relationship with someone I don't know.' What I've learned over time is that there are a couple degrees of separation for people that you don't know and people that you do know. One of the things that I encourage young women to do is to reach out to someone that they know who knows the person that they want to get to know and have that person open that door for them. It makes a big difference. And then say to the person who opens the door for you, 'If there's anything I can do for you, let me know,' so there's a quid pro quo. I think that takes a little of the mystery out of it."

"Networking needs to be very strategic. What is the purpose of your networking? Is it just to build a relationship? Is it for leadership development? Is it for subject matter expertise? Depending on the purpose, there are definitely different types of venues you can go to, conferences like [TEDWomen] that would line up with that strategy to work the room."

3. Figure out if what you're doing actually aligns with the values you have

"Leaders want to connect to people who know what they stand for. Everybody has a moment in their life where they start to self-assess and start to ask the question, 'Who am I? What do I stand for and what are my values? And what is my mission?' The book I refer younger women to read on that subject is The 7 Habits of Highly Effective People by Stephen Covey. There is a chapter in there on writing a personal mission statement — that's what I used. I did mine in 1994. It's to serve as a leader, live a balanced life, and apply ethical principles to make a significant difference, and I chose every one of those words really, really carefully."

More like this
Savannah Guthrie Got Her First-Ever Tattoo With This Former Wild Child
By Suzanne Zuckerman
These 3 Zodiac Signs Could Write A Bestselling Novel
By Brittany Beringer
These Are The Fastest Electric Kettles You Can Buy
By Margeaux Baulch Klein
25 Inspiring Quotes From Black Women To Celebrate Black History Month
By Kyli Rodriguez-Cayro and JR Thorpe
Get Even More From Bustle — Sign Up For The Newsletter
From hair trends to relationship advice, our daily newsletter has everything you need to sound like a person who’s on TikTok, even if you aren’t.