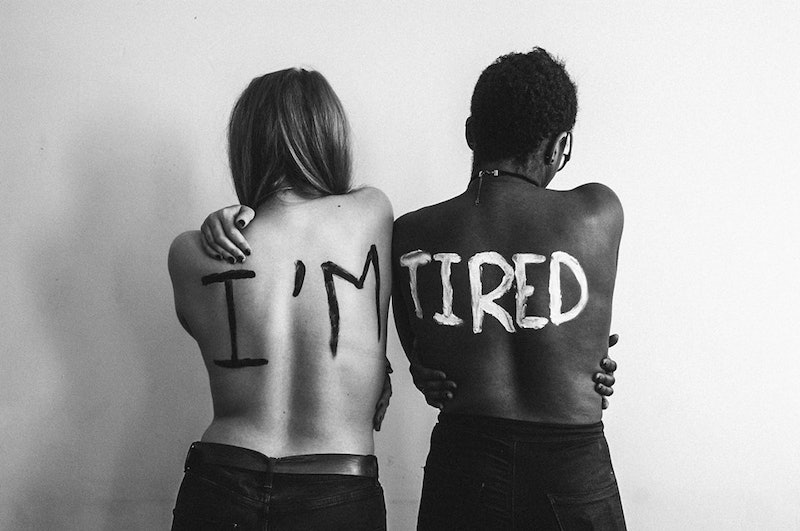 Racism, misogyny, homophobia, ableism, and other types of discrimination come, unfortunately, in a variety of different forms — some of which are subtler than others, though no less harmful. That's why Paula Akpan and Harriet Evans, recent graduates of the University of Nottingham in England, founded the I'm Tired photography project: They intend to capture and display one of these forms, micrograggressions, by calling them out for what they are. The resulting photo series is enormously powerful — and something that needs to be seen by as many people as possible.

Microagressions are forms of discrimination that can often fall under the radar. They disguise themselves as regular comments that might just seem a little ignorant — hence the word "microagression" itself, meaning "small agression." Akpan tells Bustle via email that she and Evans operate from the definition of microaggression being an "act of unintentional discrimination that can take form during everyday life and can serve to alienate or offend the recipient." She adds, "It can relate to any kind of social division such as gender, sexuality, race, etc."

In addition to having the ability to fly under the radar, a microagression has the ability to undermine someone's identity or culture by marginalizing or "othering" them. For example, a microagresssion I often experience pertains to my racial presentation. My South Asian descent makes my skin brown and my features appear different from many of my white peers, so I'm often asked the question, "Where are you from?" Though my parents were both born and raised in Pakistan, I was raised in the United States, am a U.S. citizen, and did all my schooling in Seattle, so naturally my answer is that I'm from Seattle; no other answer makes much sense. Of course, a lot of white Americans have trouble accepting that I'm just like them because I look so different, so in their dissatisfaction, they'll follow up with, "No, but where are you really from?" What makes this a microaggression is the assumption that I am an "other" based off of a physical characteristic, combine with the fact that it forces me into a box into which I don't actually fit. It's the other person's way of saying, "You can't be like the rest of us. You're not normal." Besides, would I ever ask a white person where they're really from?

"Over the last two years I have been asked this countless times, however this is not a question to which I believe there is a definitive answer – it was not a process of turning, it was a process of falling in love. Fixating on the notion that to be gay, you must have at some point ‘turned’ from being straight is nonsensical and society’s obsession with forcing people into neatly labelled boxes is unproductive. Everyone should be free to simply be who they are and find happiness however they wish on the basis of who and what they are drawn to, not on the basis of which quaint little box society has decided they ‘belong’ in.’"

Akpan says the subjects' backs were used for a few different reasons. "We felt that use of the backs helps maintain anonymity whilst also [being] somewhat symbolic, because these are grievances which all of our subjects have carried with them," she writes Bustle. "Lastly, it's very practical, as it gives us a large canvas to play with!"

"Having been diagnosed with an eating disorder over four years ago, I have heard these words uttered over and over again. As if it was that simple, as if I didn’t try. But recovery is not just about the physical act of eating more and it is not something I can always control. Each day is a struggle to eat a reasonable amount, let alone that little bit more. 'Just' eat more ignores the fact that it is a mental illness and NOT a lifestyle choice. It shows the ignorance over mental health that is still ingrained in today’s society."

"Growing up, in a mostly Caucasian area, I had not realised until I was much older that the image of a black boy or man is often one of anger or aggression. In many ways I can understand this given the often aggressive media portrayals of frankly large black males in music, TV, video games and films. However, what I do not appreciate is the way that this portrayal has come to define the presumption of my character and who I am from individuals who do not know me or who see me in a club and assume that I have an aggressive character. Through my career choices I hope to show them wrong. ‪#‎John15‬:7’"

Akpan and Evans were inspired by both the #FreetheNipple campaign and Humans of New York. During a brainstorming session, Akpan tells Bustle, "Harriet and I were bouncing ideas off of each other and thought that instead, we could have quotations of some sort written on people's backs. This way its anonymous if the person chooses, as you never see anyone's face, but also synonymous with the idea that someone has been labelled by society."

"For many, including myself, sports are an escape, a therapy, a means of creating lifelong friendships and enhancing our lives through the positivity synonymous with camaraderie, challenge and competition. Moreover, history has shown sport’s ability to transcend socio-political barriers worldwide by uniting millions. Unfortunately, personal experience and mainstream media portrayal still suggests that despite palpable progressive steps in society, the sporting world is lagging behind and proving a stubborn area of contention to overcome, especially at universities. It’s evident that numerous stereotypes still remain prevalent: stretching from race, class, gender, religion and sexuality, amongst others, the likes of which undeniably undermine sport’s unifying and betterment purposes. I hope that one day nobody at University shall be deterred from competing in sports or feel the need to conform in any way because of negative preconceptions or stereotypes.’"

Interested in getting involved? I'm Tired is an ongoing project that takes submissions. You can reach the creators and see more of their work on Facebook, Twitter, and Tumblr.

More like this
At 14, Tatiana Maslany Was Obsessing Over Tamagotchis & The Spice Girls
By Gabrielle Bondi
Scotland's First Period Dignity Officer Has Sparked Backlash
By Darshita Goyal
Beyoncé & Madonna’s “Break My Soul” Remix Honors A Group Of Black Icons
By Stephanie Topacio Long
UK Black Pride 2022 Just Broke A Major Record
By Sam Ramsden
Get Even More From Bustle — Sign Up For The Newsletter