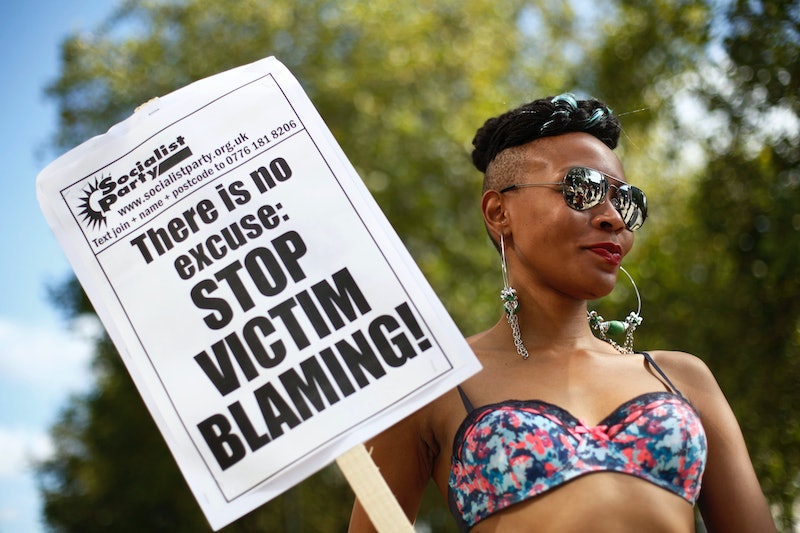 I don't know why we keep having to point this out again and again and again, but let's say it one more time: There is never any excuse for raping someone. And yet, excuses are continually trotted out, with the phrase “she was asking for it” being one of the worst of the bunch — so here we are, calling it out yet again. The latest installment of Cut Video's One Word series has women reacting to “she was asking for it,” driving home yet again the fact that no one is ever asking to be raped. It's a familiar argument, but given how prevalent victim-blaming still is, it bears repeating. As these women — women of all ages and types — highlight, no matter how old or young someone is, or what they look like, or how they dress, that's no excuse to assault them. Ever.

Here's just a small selection of the reactions the women in the video had. Scroll down to watch the whole thing.

“No one ever asks for something like that to be taken from them.”

“It's an act committed on somebody in a non-consensual way. … So, no. No one is ever asking for it.”

And she's not the only one to have answered this way. Multiple women all said the same thing.

“It doesn't matter what she looked like, what she was saying… Nobody deserves to have the control over their body taken away from them without their consent.”

As an excuse, it allows the perpetrator to divorce themselves from taking responsibility for their actions. But as many have said time and time again, instead of telling people not to get raped, how about we tell people not to rape in the first place?

We've come to expect people to use “she was asking for it” as an excuse. And that? Is truly horrifying.