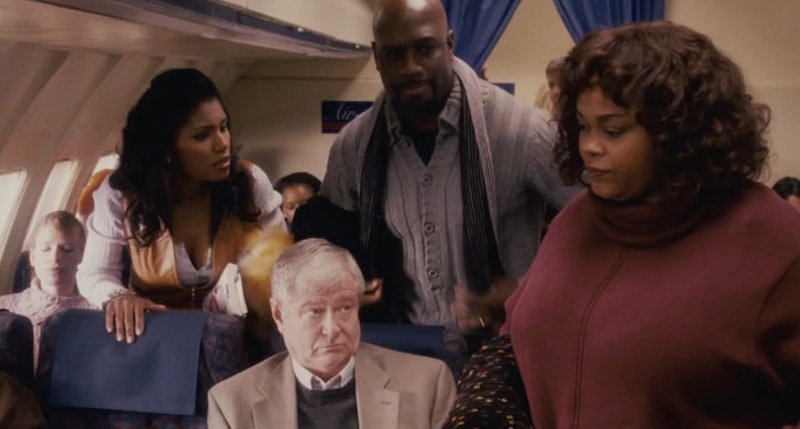 I'm just going to come out and say it: Being a fat woman on an airplane is hard. Actually, being any size human on an airplane is hard because planes just aren't designed for average-sized people. The simple truth is that those seats are getting smaller and smaller by the day, while a lot of bodies are staying big (because, you know, normal body diversity and all).

I can't help but feel that the experience of being fat on a plane is even more intense for women, thanks to the politics of space and size, not to mention the sexism and fat-phobia double-bind that fat women face. You see, fat women often endure the oppression of being fat and being women, which creates a distinctly different experience from that of fat men. For example: Although fat men are sometimes made fun of for their weight in sitcoms, they at least have visibility, which can't really be said nearly as much for fat women. Just think about Melissa McCarthy versus Kevin James. How many of McCarthy's characters have been linked to weight-based storylines? How many of James'? Science has also told us that women face discrimination for being fat fat more than men do.

We know that women's worth is very heavily placed on their body size. Feminine identities reflected in our culture are intertwined with being small and not taking up space. This gendered experience often shapes the thoughts that fat women (and those around them) have in this environment. So now, let's look at six thoughts I've had while flying, that other fat women like have as well.

It makes sense from a business perspective that airplane seats would be made to be as small as possible, in the hopes of bringing in high profits for the airlines by packing passengers in like sardines.

Airplane seats have gotten smaller over the last few decades as well, likely because research has shown that, when given a choice, customers prefer lower prices to increased comfort on airplanes. As companies who depend on a profit for survival, I guess airlines have no reason to make their seating more accommodating to people of all sizes — which kinda sucks.

2. "This seatbelt should be made about 10 times longer."

As if dealing with the small seats wasn't enough, the seat belts that come with the seats are usually extremely short, too. Like, toddler-level short. We shouldn't have to be forced to either squeeze into an uncomfortable small belt or forgo safety altogether just because someone didn't consider that bodies come in different shapes and sizes. Everyone deserves to feel safe and comfortable on airplanes.

So, fat-phobia is the worst. We unfortunately live in a culture where fat people are not often accepted, but rather repeatedly shamed and told that their bodies aren't worthy. In my experience, airplanes are homes to uncomfortable stares and micro-aggressions from strangers. It's not uncommon for the person next to you or even a few aisles down to scowl at your tummy while you make your way to your seat.

4. "These pants really digging into me."

If you wear any pants that aren't leggings while flying, you'll probably face the inevitable belly bulge that happens when your trousers are digging into your skin under your seat belt — leaving that achy red mark as evidence of your discomfort.

Flying is not the time to hold a fashion show, though, so please wear comfortable clothes over something chic and suffocating. Pants in particular are notorious for poking you in the wrong places, but when you have some proud pudge and have to stay in your too-small seat for hours on end, they're going to be even more irritating.

5. "I wish that guy would stop manspreading so I can actually use the space of my entire seat."

Can I just say that men in public space are the worst? I realize that this is a massive generalization, but I've personally yet to encounter a dude on an airplane who hasn't man-spreaded (aka spread his legs so far out that they're getting all up in your space). It's funny that fat people get told time and time again that they take up too much space, even though men of all sizes often feel entitled enough to completely take over an entire space.

Being on an airplane allows you to really feel your body and get up close and personal with it in a way that's unique to when you're sprawling out on your couch. Don't take it for granted! Instead, take flying and all that comes with it as an opportunity to love your body and appreciate all that it does for you.

The only reason you might pause to feel badly about any of the above thoughts is because you've probably been conditioned to body shame yourself. But people are supposed to be different sizes — even if airplane seats suggest otherwise.