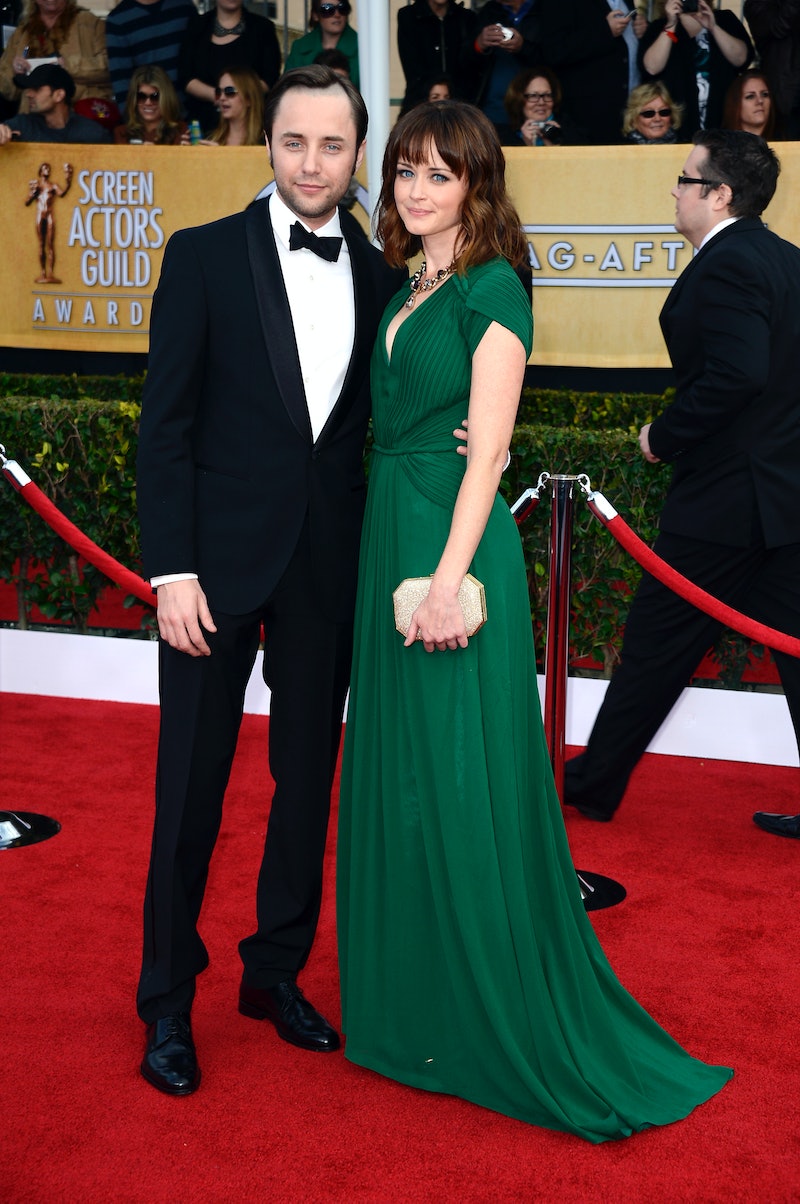 In my mind and Gilmore Girls loving heart, Alexis Bledel will always be Rory Gilmore to me, so it's hard to accept the fact that, in reality, Bledel is her own person who did not follow Barack Obama's campaign trail and become a successful journalist after graduating from Yale. The good news? Her real life is just as amazing. More than a year ago, Bledel married her now-husband, Vincent Kartheiser, and even though the Mad Men actor is no Jess Mariano, he'll definitely do. They're pretty cute together, and even though both of them tend to keep their personal lives private, they do seem happy. So how did Bledel and Kartheiser meet? For two TV stars, their love story started in a very appropriate way.

Bledel and Kartheiser first met on the set of Mad Men , when Bledel appeared in a guest-starring role in 2012 in the show's fifth season. Bledel played the mistress of Kartheiser's character, Pete Campbell, in a three-episode arc, and the rest is history. But it wasn't like they started dating right away, especially not while they were working together. When talking to New York Magazine last year, Kartheiser said that they were "completely professional." But when it was time for the show's creator, Matthew Weiner, to give his input on their relationship, he insisted that it was clear that they'd get married from their first meeting. He said:

I told Vinnie that they would be great together. I was like, "Don’t blow it!" Honestly, they’re a really good match. They’re both very down to earth, with a sense of responsibility and strong family ties. And they’ve been acting since before they can remember, which makes for a very special personality. It’s not just that I thought they would look cute together. Even with all of Alexis’s amazing qualities, I think that if she had not been such a good actress, he would not have been interested.

OK, that's adorable — and anytime anyone else involved who Mad Men who knows the couple is asked about their relationship, they end up gushing over how perfect they are for each other. Case in point: Rich Sommer, who had a lot of sweet things to say about Bledel and Kartheimer to Us Weekly after their wedding last June. "She's lovely, and I can truly say that Vinny is night and day — he's a different person since they first started hanging out," he said at the time. "All of us knew that it was going to happen, so it's a very lovely thing."

And after getting engaged in 2013, they tied the knot in June 2014. Not too many details have leaked about their private ceremony, even more than a year later, but I have a feeling it was probably pretty classy and elegant.

To this day, they both stay pretty quiet about their relationship, but things seem to be going well. And one thing's for sure: If they ever decide to have children, they are going to have the most gorgeous blue eyes. Fingers crossed they name their firstborn Lorelai!