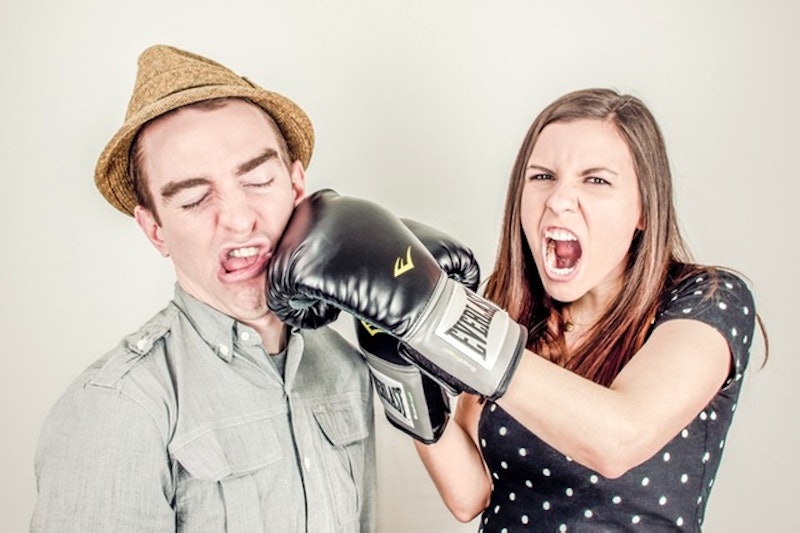 It is no big secret that college students want to pick a major with the most lucrative outcome. The sooner they can pay off those debts, the sooner they can buy that house or that sensible eco-friendly sedan. It is also no big secret that there is a severe wage-gap where women are making only 77 percent of what their male coworkers earn. However, the times may be a-changin': A new piece of data analysis reveals that in a number of fields women are out-earning men — for recent college graduates, at least.

Economists of the Federal Reserve Bank of New York, Jason A. Aibel and Richard Dietz, have found that amongst college grads the 23 percent wage gap has closed to only a 3 percent wage gap among male and female graduates who studied the same college major. (Is this the part where we're supposed to jump up and down and be thrilled that the company we work for refuses to cough up three percent for the same job?). Furthering their studies, Aibel and Dietz found that in 29 of the 73 majors they studied, female graduates actually made more than male graduates of the same major. However, it's worth noting that these figures only held true for recent college grads; when you look at the data for those in the mid-career range, men still vastly out-earn women.

So what are those majors? Many of them seem pretty standard. At first, a few came as a surprise to me (ones like aerospace engineering and construction services); however, it's possible that women might be in the minority in these types of careers, making them that much more vluable to a company. I have to wonder then, where is our value when it comes to the other 44 majors that male graduates are still earning higher wages in?

Here are the top 10 majors where recent women college graduates out-earn men, according to Aibel and Deitz's analysis; head on over to Liberty Street Economics for more.

Have a strong desire to go into companies and solve different problems, like cost control and sales improvement? Maybe you're suited for the life of a business analyst. Female analysts are earning up to seven percent more than male business analysts.

Aerospace engineers design spacecrafts, aircrafts, missiles, and satellites; they also test prototypes for functionality. This is another career choice with an eight percent wage gap between men and women.

Maybe Charlotte York had it right all along (what is the deal with that "unmarried woman" thing?). Graduates in art history can become museum curartors, gallery owners, art advisors, estate and art appraisers, art and antique dealers, art librarians... the list goes on. Earnings for female art historians are nine percent higher than men.

An industrial engineer's job is to effectively determine the most resourceful ways to utilize machines, materials, energy, and workers. Women see a significant wage-gap in this field, earning ten percent more than male engineers.

Treatment therapy is another one of those umbrella majors. Careers in treatment therapy can range from physical therapy to speech therapy, all the way to psychotherapy and behavioral therapy. Women in this field earn wages eleven percent higher than men.

Social service careers are the careers that most favor women. These careers include substance abuse social workers, child social services, school social work, healthcare social workers, speech pathologists, and school counselors. There is a whopping sixteen percent difference in wages for female and male graduates in this field.

More like this
How To Fight For Reproductive Rights, Based On How Much Time You Have
By Courtney Young
5 Ways To Stand In Solidarity With Women In America From The UK
By Sophie McEvoy
How to Delete (or Pause) Your Hinge Account
By Emma Carey
How To Protect Your Digital Privacy If You Need An Abortion Post-Roe
By Kaitlyn Wylde
Get Even More From Bustle — Sign Up For The Newsletter