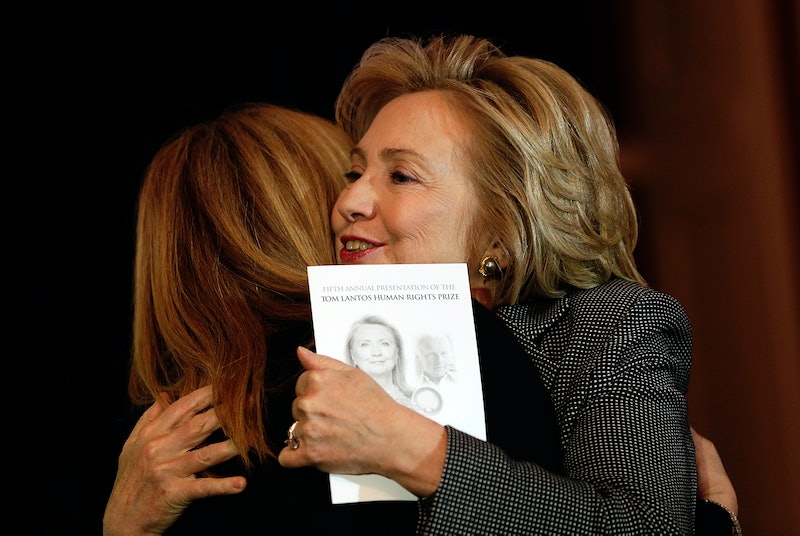 Hillary Clinton hasn't even declared her 2016 candidacy yet, but the Hillary Clinton campaign-in-waiting — a.k.a.. Ready For Hillary, the super PAC waiting in the wings for Clinton to declare her 2016 presidential candidacy — already has a plan. If and when the former Secretary of State runs, they'll focus on this: not letting the women’s vote slip away like it did in 2008. Ready For Hillary already has a Women’s Office, and its director says that, unlike in 2008, Team Clinton plans to make a focused appeal to women and girls.

Technically, Clinton has nothing to do with Ready For Hillary, but she already seems to be taking the group’s advice. On Tuesday, she and Facebook COO Sheryl Sandberg were honored at a gala hosted by Women for Women International, a group that provides “direct financial and emotional support” for female survivors of war. Sandberg presented Clinton with the Champion of Peace Award for her work as Secretary of State.

“You cannot have real peace and security if you marginalize and exclude women,” Clinton said at the gala. “You cannot have decent, just societies if you abuse women. You cannot move on a path to democracy and open economies if you isolate and marginalize half the population. For some that was self-evident, others have had their eyes opened over the past 20 years.”

In her 2008 presidential campaign, Clinton didn’t win over as many women as one might assume. Barack Obama’s fundraising base included 124,344 female donors, compared with 53,613 for Clinton. And while Clinton did win over women voters in 20 primaries, she lost them to Obama in 16 other states. Younger women in particular went for Obama over Clinton, a problem some attributed to Clinton’s reluctance to play up the significance of being the first woman in the Oval Office.

“We’re going to highlight her work with women and girls as Secretary of State,” Jessica Grounds, director of the Women’s Office at Ready For Hillary, said Wednesday. “As well, obviously, the historic nature of a potential first woman president.”

Considering Joe Biden’s clear interest in running for president again, the prospect of a Clinton 2016 candidacy brings up the inevitable prospect of Obama being forced to choose sides between his Vice President and his former Secretary of State. In an interview Thursday, however, Obama put the kibosh on that one, for the time being at least, and instead heaped equal praise — precisely — on both Clinton and Biden.