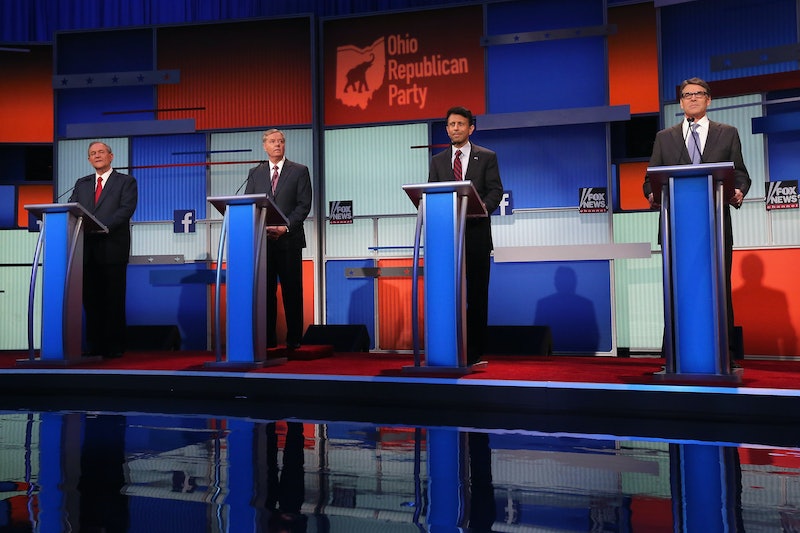 The Republican forum on Fox News featured the seven candidates who did not make the cut for the first prime-time GOP debate on Thursday, Aug. 6. The seven are essentially the JV squad of candidates, compared to the Varsity team that goes on at 9 p.m. This lower tier of players is made up of Rick Perry, Lindsey Graham, Bobby Jindal, Carly Fiorina, George Pataki, Jim Gilmore, and Rick Santorum. And guys? You know how no one in high school goes to the JV games, and instead pregames in the parking lot while waiting for the Varsity match up to start? Well. That happened here, too. The attendance for the forum was abysmal. The auditorium was empty.

When the Fox cameras panned to the crowd, I assumed, Oh, this is somehow a closed debate. They didn't let anyone in. Huh. Weird. But nope! The New York Times didn't mention any sort of limited attendance rule in their writeup. It just seems like even those who were invited were all like, Nah. No thanks. When the moderators introduced each candidate, only faint, half-hearted lone claps could be heard in the far-off distance. Is Rick Perry's mom there? Was she the one who clapped?

And the echo. Oh, the echo. It added insult to injury to hear the moderators' voices booooom through the wide, wide abyss. Listen. If you open your ears, you can probably hear Martha MacCallum's voice ricocheting off of the Cleveland streets and into the heart and souls of hard-working Americans.

And I'm not the only one who's secondhand embarrassed by the lack of attendance. People are cringing.

They say a photo is worth a thousand empty chairs, so here you go:

One more for ya: