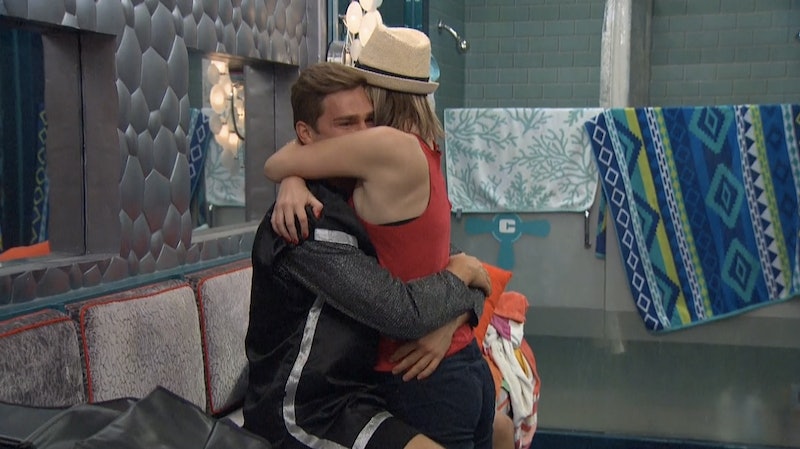 When they say to expect the unexpected, I didn't quite have this in mind: There I was, curled up in bed, trying to settle my conflicting feelings about James breaking up Clay and Shelli's showmance on Big Brother 17 when all of a sudden, there was Clay rubbing up on Meg in the bathroom. To say that I was shocked and confused is certainly an understatement, and I'm not the only one. Twists and surprises are the name of the game in the Big Brother house, so it's hard to surprise even the casual BB fan. Maybe that's why the fans are finally appreciating what it feels like to be blindsided after Wednesday night's episode. There were so many things wrong with what was happening, and I had so many questions. How did this happen? When did this start? Are Meg and Clay a showmance too?!

Normally, one might think that you can't trust the ramblings of a drunk person, but is there something more to Meg's story? In an effort to get to the bottom of this, here's a timeline of Meg and Clay's relationship on BB17 — so far.

During Meg's drunken confession of love, she said that Clay's been her dude since Day 1. With no indication that this was actually the case, I'll just take her word for it.

Here's when things get interesting and we start to see — in hindsight, anyway — how Cleg got to this point. While chatting on the hammock leading up to Jace's eviction, Clay said, very genuinely, that Meg was his main girl, with Shelli close behind her.

Wow! What a reminder that Shelli and Clay weren't always the BB power couple, and that there was a time in the house when somebody else came first in Clay's eyes. Suddenly, Meg's comments are starting to sound a lot more rational.

Just a day after deeming Meg his main girl, Clay cuddled up in the hammock with Shelli to talk about Audrey's growing paranoia in the house, among other things. In the weeks since then, Clelli has said that it was one of these late-night cuddle sessions that really brought them together and sealed their showmance fate. Looking back now, this seems to be the one.

Clay and Shelli make their first official appearance as the BB17 showmance darlings when they are each other's dates for Prom Night. They choreograph a mostly-adorable/semi-awkward dance in matching cowboy/cowgirl outfits and the rest, as they say, is BB history.

From here, Clay and Meg's relationship seems to take a break. Sure, they have private conversations from time to time, and Clay certainly stays friends with Meg, but nothing out of the ordinary happens.

Until, of course, Jason is backdoored.

Clay is the first person Meg turns to for comfort and answers when she's blindsided by Vanessa backdooring Jason. At the time, many were likely wondering why she went to Clay in the first place, and now the reason is starting to become clear.

Sadly, this was also the first major rift in Meg and Clay's relationship because, instead of coming clean to her, Clay lied and said he had no idea Jason was going to get nominated.

Jason is evicted and Meg is out for blood.

Clay and Shelli get nominated, and Meg is part of the alliance that put them on the block. Ouch.

After losing the Power of Veto, Clay and Shelli know they're about to be split up. This time, it's Clay's turn to go to Meg for comfort, and as we know, that is definitely what he gets.

Going into Eviction Night, the plan seems to be to send Shelli home. If that happens, what's in store for Clay and Meg? I'm now dying to find out! For more on Big Brother, check out Bustle's podcast The Diary Room.