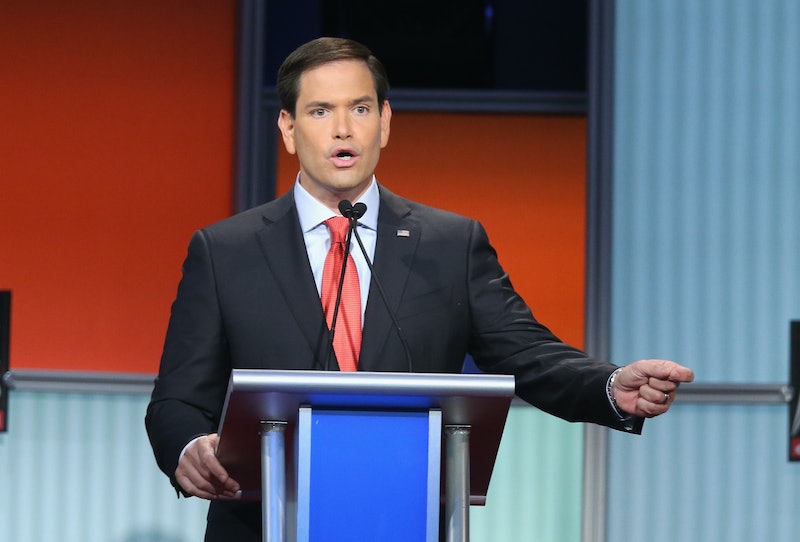 Thank you, GOP presidential debate, for showing us the real Marco Rubio. The junior senator from Florida has long danced around his hardline views on abortion, evading questions about abortion exemptions while firmly upholding his 100 percent "pro-life" stance at National Right to Life meetings and the like. But on Thursday night, Rubio delivered his true feelings on abortion, and they're not pretty. In a departure from his past political record, Rubio clarified that he doesn't support any exemptions for abortion, including for victims of rape or incest.

"If you believe that life begins at conception, which you do, how do you justify ending a life just because it begins violently through no fault of the baby?” debate moderator Megyn Kelly asked Rubio. The senator responded that he has never supported any exemptions when it comes to abortion.

"I have never said that,” Rubio told Kelly. “I’ve never advocated that. I’ve advocated passing a law that says that all human life, at every stage of its development, is worthy of protection — in fact, I believe that law already exists.”

Rubio added that law is called "the United States Constitution." He did not, however, address that abortion is not mentioned in the U.S. Constitution, and that Roe v. Wade protects a person's right to an abortion up until the 24th week of pregnancy.

But Rubio's record tells a different story. Although Rubio has always billed himself as an anti-abortion politician, he has consistently supported abortion exemptions for victims of rape and incest in the past. In 2013, the senator co-sponsored the Pain-Capable Unborn Child Protection Act, which included exceptions for rape and incest victims.

In defense of Rubio, his views on abortion are often complicated. The senator recently said at a National Right to Life convention that abortion rights are "indefensible," Bloomberg Politics reported. As a Catholic, Rubio has also talked at length about his belief that life begins at fertilization and should be protected.