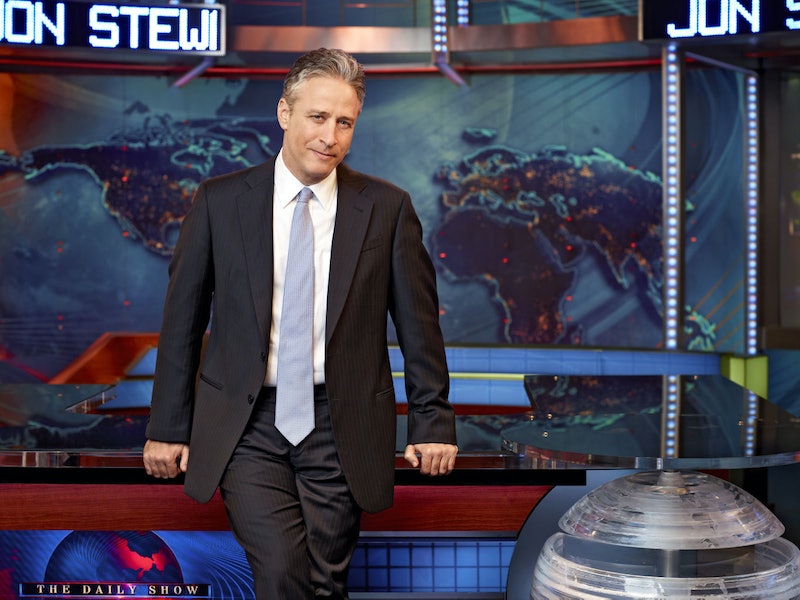 I can't believe he's done. Thursday night gave us the final episode of The Daily Show With Jon Stewart , and it was a hilarious, wonderful, emotional episode filled with celebrity cameos, a great performance from Bruce Springsteen as Stewart's final Moment of Zen, and one of the best and most Jon Stewart-y pieces of advice ever. Stewart shared a few final words of wisdom he's gained over 16 years of comedically reporting news with wit, biting humor, and the most complete honesty ever. He spoke to the audiences of the three kinds of BS in the world, and the transcript of Stewart's bullsh*t speech shows his important parting message of how people can recognize and help stop its spread in the media and in the world.

If Stewart has learned anything during his time being the incredible host of one of the best late-night comedy series ever, he ways it's how to spot BS from a mile away and how to help call it out and confront it head on. So thankfully, Stewart gave us the opportunity to learn this trade as well. There are some kinds of bullsh*t, Stewart revealed, that are necessary. Basically that's stuff like lying about how cute (or not cute a baby is). Stewart calls this kind of BS the "general, day-to-day, organic, free-range bullsh*t." While the three types may sound different, in the end they're all essentially doing the same thing: Falsely stating things in order to drive attention away from the truth and what's really going on. Stewart's speech on bullshit should seriously be needle-pointed onto a pillow, this is some grade-A advice.

Patriot Act. Because 'Are you scared enough to let me look at all of your phone records' Act doesnt' sell. So whenever something's been titled 'Freedom,' 'Family,' 'Fairness,' 'Health', 'America,' take a good long sniff. Chances are it's been manufactured in a facility that may contain traces of bullsh*t.

How incredible is this?

Complexity. You know, I would love to download Drizzy's latest Meek Mill diss. (Everyone promised me that that made sense.) But I'm not really interested right now in reading Tolstoy's iTunes agreement, so I'll just click agree even if it grants Apple 'prima nocte' with my spouse.

What a great Drake shoutout, amirite?!

These bullsh*tters cover their unwillingness to act under the guise of unending inquiry. We can't do anything because we don't yet know everything. 'We cannot take action on climate change until everyone in the world agrees that gay marriage vaccines won't cause our children to marry goats who will come for our guns.' Until then, I say it leads to controversy.

Finally, this kind of bullsh*t is what we hear from politicians every day.

Now that we know these kinds of bullsh*t, we can recognize it way better, right? Thankfully, Stewart says despite there being so much bullsh*t in the world, "Bullsh*tters have gotten pretty lazy, and their work is easily detected." And if he didn't already give us the perfect words of advice that we should all cherish forever, he ended with this: "So I say to you tonight, friends. The best defense against bullsh*t is vigilance. So if you smell something, say something." Thanks to you, Jon, I genuinely hope more people will follow your example.