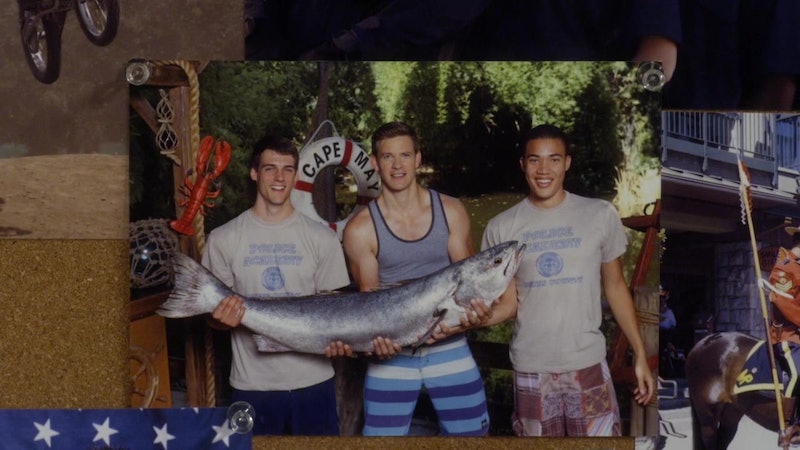 Season 6A of Pretty Little Liars is being called the "Summer of Answers," and so far, the writers are making good on their promise to deliver the solutions to some of fans' biggest questions. "Game Over, Charles" promises to reveal who killed Bethany, what really happened to Toby's mother, and, most importantly, Charles DiLaurentis' identity, plus even more answers. The finale is certainly promising big things, and while this summer is revealing more than any previous season ever has, there is one question that we have yet to address: who is Beach Hottie on Pretty Little Liars ?

First, let's do a quick refresher on why that moniker matters. "Beach Hottie" is the name that Ali gave an anonymous boy in her diary. He is someone she hooked up with while vacationing in Cape May, and someone she couldn't tell any of her friends about. According to CeCe, this is the same person who Ali slept with, leading to a false pregnancy scare. So far, we haven't been able to place the identity of this mystery man, though CeCe believed it to be Detective Wilden. That has never been confirmed, and since Wilden doesn't seem to be important to PLL anymore, I don't think he's the guy we're looking for. Beach Hottie has also been a topic of discussion on Bustle's podcast Taking This One To The Grave, which you can check out below.

We can now also cross Charles DiLaurentis off the list of suspects, since he has been confirmed as Alison's brother, and she had a romantic relationship with Beach Hottie. Of course, that means we might not find out his real identity until well after Charles is unmasked. Could Beach Hottie be connected to whoever tortures the girls next? (Come on, you didn't think they'd live normal lives like, ever, right?) It's certainly a possibility, and here are some people we should look out for when Pretty Little Liars returns.

He's older than Ali and apparently did her dirty work after she was arrested for Bethany's murder. It would also make sense for Holbrook to return to Rosewood as a detective if he wanted to learn more about Ali and even help track her down. If he is Beach Hottie, it looks like he and Ali rekindled their romance at the Ice Ball in "How The A Stole Christmas" — and he might not have been as much of a threat to her as the Liars initially imagined.

I know, it sounds completely and utterly ridiculous — but hear me out. Ali was a master manipulator and all about her image when she went to Cape May. Perhaps she told CeCe that she was hooking up with Wilden, when in reality she was sneaking off with Lucas. Maybe things soured with them before they returned to school, and she threatened to make his life a living hell come fall — hence why Lucas was so angry with her after her disappearance. The biggest clue to this theory is that in Ali's Beach Hottie letter, she mentions taking photos with her summer bae: could this be a clue that he was really photographer Lucas?

There has to be a reason for Dean showing up on three separate occasions, and I doubt it was just to drive a wedge between Toby and Spencer. (I think that Jonny, Andrew, and that British guy did that just fine.) Could Dean secretly be connected to Ali? We never saw them interact on the series, so he could've been avoiding letting her know that he was in Rosewood.

Ah, Doctor Wren. He's pretty much everyone's #1 suspect for everything. If he's not secretly Charles DiLaurentis as some fans (including this one) believe, he could be Beach Hottie. Like pretty much every older guy on this show, he often pursues high school girls, and is mysterious enough to have any backstory.

We might not find out who Beach Hottie is for a while, but wouldn't it be so great if one of the Liars just flat-out asked Ali who it was? Come on guys, let's close one mystery while we still can. And for a totally different, hilarious take on PLL's mysteries, watch as people totally new to the show try to figure them out.