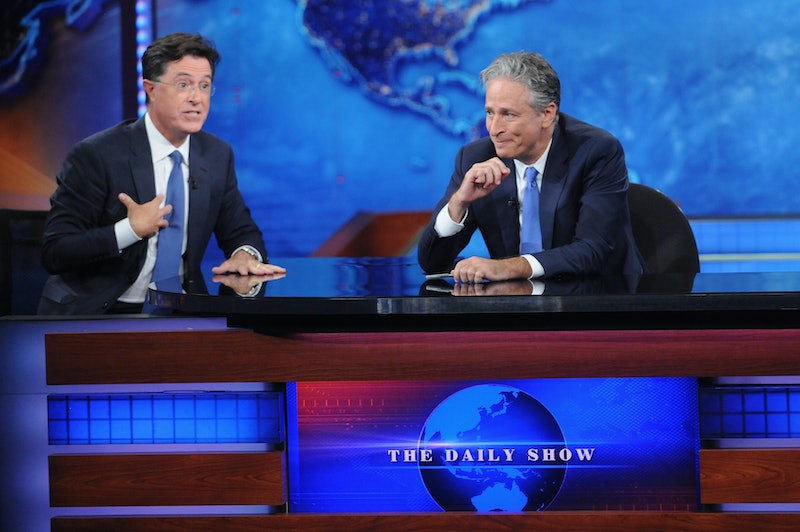 So that's it. We are in a new age. As of August 6, The Daily Show With Jon Stewart is over, and, the next time we see an episode of The Daily Show, it will be with Trevor Noah in the hosting seat. While it will be exciting to see a whole new phase in the show's history, those of us who grew up with Stewart, who rely on Stewart, who revere Stewart like a hosting deity, aren't quite ready to make the transition so soon — or ever. Stewart is a legacy as integral to The Daily Show as the writers, the correspondents, or the audience themselves, and saying goodbye is probably akin to cutting off your own arm. We'll still be able to feel the phantom of his presence for months to come. In fact, there are stages of grief to saying goodbye to The Daily Show that every fan must go through before they can prepare for the new season.

But that's why I'm here. I'm cycling through those stages of grief myself and I can hardly call myself ready to say goodbye to Stewart and hello to Noah. I'm going to have to watch Stewart's finale again, because I could barely see it through my tears on August 6. So take my hand and grab a box of tissues, my friends, because we're all in this together, and, if we support one another, we can make it through this with minimal emotional scars.

To be fair, you've been sobbing since Stewart first announced that he was going to step down as host of The Daily Show. Sometimes, your tears dry, and you forget what made you cry so hard in the first place, but, inevitably, your brain remembers, and you're resting in a pool of your own tears once more. You'll be coming back to this stage a lot, no matter how many years have passed.

You just keep thinking about the good old days, like when Stewart introduced the world to the faux news comedic stylings of Stephen Colbert, or when Stewart could barely hold it together while doing his own news segments, or the amazing wonder that is Jessica Williams. Sure, you're not losing Williams, but, dang, Stewart and The Colbert Report in the same year? It's better to live in the past.

Because, really, you just love Stewart so much. You probably trust him more than most news networks. Heck, you probably watch him to get your news rather than watching most news networks. The news is depressing; Stewart makes it funny and relatable. He's pretty much your personal hero, and you want him to be happy with wherever he ends up after The Daily Show.

Not to mention you remember all the laughs that you had with him...and also you're a bit delirious with sadness right now.

Eventually you realize that memories are all you have now. That's when you stop crying, stop laughing, and start falling into a deep spiral of depression that no one can pull you out of. Your childhood is over. Your adulthood is over. Everything is pointless because Jon Stewart is gone. It's time to sit in a dark room and stare at the wall from now until forever.

Eventually, of course, you have to leave your room to eat and work and pee, but you're just going through the motions at this point. You are a robot, mechanically performing tasks while your mind is a million miles away, thinking of Stewart and how you'll never have a new episode of The Daily Show with him ever again.

Eventually, you'll just stop leaving the house again, and instead just sit inside watching old episodes of The Daily Show on your laptop.

But then you get kind of curious. I mean, you don't really know much about Trevor Noah, and it is really cool that The Daily Show is in the hands of a person of color for the first time since the show began. He might not be Stewart, but you're kind of eager to know who Noah is as a comedian and faux news show host. Curious enough to maybe finally leave your house, and pay your cable bill again.

All right, Noah, you have one job: Entertain while educating the masses. No pressure or anything. But you can enjoy Noah and miss Stewart without one negatively impacting your ability to do the other, and that is the hardest part of all of this to accept.