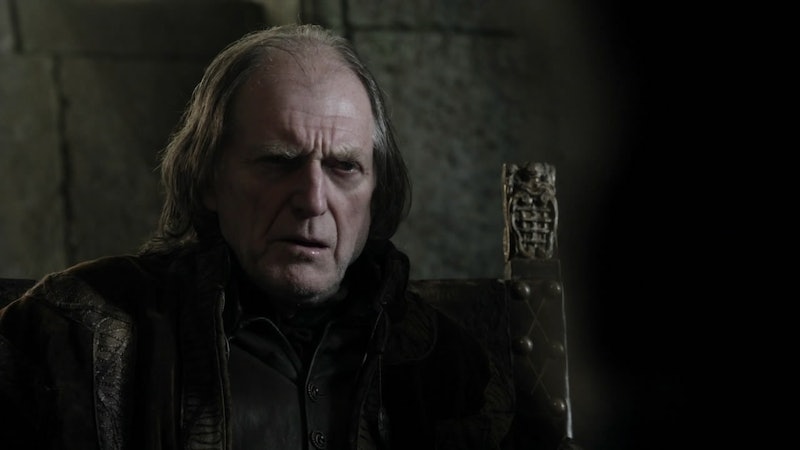 Of all the characters who could possibly make a return trip to Game of Thrones, Walder Frey is the one most likely to be met with a groan. However, sure enough, the man who hosted the Red Wedding will return...eventually. Zap2it reports that David Bradley will return as Walder Frey in Game of Thrones, but the actor would not confirm if he will show up in Season 6 because "things are in a delicate situation." I'm a bit torn on how to feel about this. On the one hand, Bradley always plays the best sort of bad guy, and I'm all for great actors getting work — but on the other...ugh, stupid, life-ruining Walder Frey is coming back to probably ruin more lives!

There is an acceptable reason for Frey to make his triumphant return and that's to face retribution for what he did to the Starks and their bannermen at the Red Wedding. The North remembers, bro, and no one wants to see Frey and his endless brood get away with breaking sacred oaths. The elder Frey needs to pay for the brutal murders of Robb, Catelyn, Talisa, and everyone else who died at the Twins.

Sadly, there are other reasons Frey could be coming back. His family's home is an important crossing point between the North and the South, so not only are there many opportunities for his return, but there are also many ways the return of House Frey could affect Game of Thrones. Here are just a few reasons why Walder and his brood could be returning.

Another Family Could Unseat House Frey

Watchers on the Wall reports Game of Thrones is currently seeking a hapless, thirtysomething actor who sounds an awful lot like one of Walder's sons. The role is for a three-episode arc featuring members of the principle cast. Maybe The Twins is about to be taken by another house? The Freys are proud of how long they have commanded the crossing, so it would be sweet to see the entire family ousted from this pivotal position. But who would be pushing into the Riverlands? Perhaps the Boltons are going to turn on the Freys the way the Freys turned on the Starks.... just a thought!

The Tullys Could Return To The Narrative

Since the deaths of Catelyn and Lyssa, the Tullys have been missing in action. Catelyn's brother Edmure is still being held captive by the Freys, and The Blackfish (aka, the coolest character ever) is alive, but his whereabouts are unknown. Given that The Blackfish (Brynden) was one of the few to escape the Red Wedding with his life, he must want vengeance for his niece and nephews. It would be interesting to see not only what The Blackfish has been up to, but also how he plans to take on Walder.

Book fans are still waiting patiently for Lady Stoneheart to finally show up on Game of Thrones. While she didn't appear at the end of Season 3, the fact that Season 6 is set to feature a group of outlaws seems slightly suspicious. What if Lady Stoneheart is leading this group and she decides to take Walder Frey by surprise? After all, in the books, Lady Stoneheart leads The Brotherhood Without Banners — and let's be real, there would be no sweeter vengeance than seeing Lady Stoneheart exact revenge on Walder.

The Twins is a key crossing point, and anyone who wants to go through the Riverlands has to get permission to pass from the Freys. There are several characters who might need to make their way across The Riverlands — including Brienne, Sansa, and Theon. Staying in the North where Ramsay continues to rule is a dangerous prospect, and those three only have two choices: go deeper North toward The Wall, or possibly make their way to Riverrun, which is likely being held by Sansa's uncle.

Another possibility is Littlefinger, who is supposed to be claiming Winterfell for the Lannisters. He, too, would need to cross the Frey's land, and it would be interesting to see Littlefinger interact with Edmure since he was the one who gave Petyr his nickname.

Walder is crazy old, and in the world of Game of Thrones, justice is rarely served. If Walder simply dies then his many, many children would be left behind to squabble over who inherits the House and title of Lord. This could create a serious power vacuum, leaving House Frey open to being eliminated altogether. Seeing the house that Walder built crumble would be its own sweet form of justice.

Personally, I'm pulling for Lady Stoneheart to off the man who killed her son, but as long as Walder doesn't get away with the Red Wedding completely I will be a happy fan.