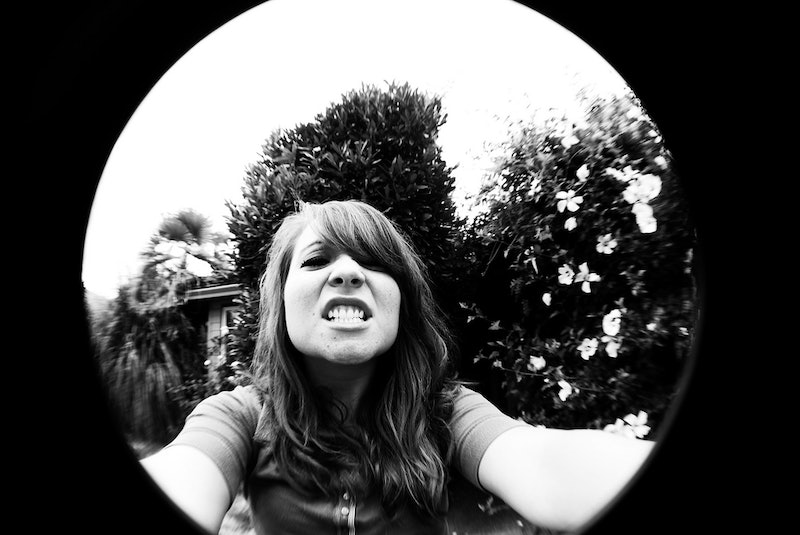 When it comes to complimenting plus size women, a lot of people give backhanded ones. From family members who meant well, to colleagues who never thought it was inappropriate, I’ve spent the majority of my life around people who never realized that many of the compliments they were paying me were anything but complimentary — and were in fact packed full of hurtful stereotypes. Even my closest friends would say things they shouldn't about my size.

These backhanded compliments that people pay plus size women typically play off the insecurities people have about their size or their possible desire to be thinner (“It’s so slimming on you,” “You really don’t eat that much for a girl your size,” “It makes you look ten pounds lighter,” etc.). If these comments are not meant to fetishize us, then they're generally designed to infantilize plus size women and make us feel poorly about ourselves.

What’s worse is that these “compliments” (if that’s what we’re going to call them) are so normalized that people don’t think twice when saying them, or even receiving them. It wasn’t until I became more conscientious about body shaming that I realized most of the compliments I’d been given over the course of my life had actually been designed to make me feel worse about myself.

They’d all played a part in teaching me that beauty meant being thin — and if you weren’t thin, then you couldn’t be beautiful. I was taught that even if I was pretty, I was only pretty for a “fat chick.” Even when I was being told to feel great about myself, I was being taught that I should really be ashamed of my body, and that my worth really could be measured on a scale.

If you are or have been a plus size woman, then you’ve almost definitely heard at least one of these seven backhanded compliments at some point in your life. We don't need to listen to this stuff. So the next time someone tries to tell you that you’d be “so much more beautiful if you lost some weight,” make sure you explain to them why they should save their breath.

1. You’re So Brave To Wear That; I Never Could

This sentence raises so many red flags that it’s hard to figure out where to start. First and foremost, it shows just how deeply rooted fat shaming is in our culture. It shouldn’t take bravery to wear hot pants in public, and the fact that it does really says a lot about the negative influence of mainstream media beauty ideals.

Secondly, the fact that someone’s been so badly body shamed that they’re convinced they’re not allowed to wear something in public is deeply depressing. Telling me I’m brave for wearing a romper to lunch isn’t a compliment; it’s a cry for help.

2. You’d Be So Pretty If You Lost Some Weight

This means that you don’t think I’m pretty now — you think I have the potential to be pretty one day, but only if I lost twenty pounds. The only problem with this “compliment” is that I’m already pretty and I don’t need to lose twenty pounds to feel that way about myself. Also, it’s a good thing I don’t care about what you think. Sorry, not sorry.

3. You’re So Beautiful For A Plus Size Girl!

If you need to put a qualifier in with a compliment, then it’s not really a compliment, is it? By adding “for a plus size girl,” you’re suggesting that plus size women aren’t normally beautiful — but the person you’re talking to is an exception to the rule. Not only is this completely backhanded — it’s basically saying you’re the best of a bad lot — but it’s propagating the idea that there’s something ugly about being plus size. It’s a sentence designed to make people feel badly about themselves and it derails the message of the body positivity movement.

4. You Look Really Good In Black, Which Is Great Because It’s A Slimming Color

In addition to black, I also look good in blue, pink, yellow, and literally any other color I put on my body. Because thin doesn’t equal beautiful, and I don’t care if black is a slimming color. While people who use this as a compliment intend well, it doesn’t change the fact that they’re encouraging the idea that the bigger you are, the less you should think of yourself. And that’s never the case.

5. You Don’t Eat Much For A Plus Size Woman

“Compliments” like this annoy me because they suggest that anyone who’s a plus size individual must be packing away cheeseburger after cheeseburger; that being overweight is solely the result of an unhealthy diet, despite the fact that there’s a myriad of medical and personal reasons that people find themselves on the heavy end of their scale. These kinds of statements also shame eating and the enjoyment of food, and help contribute to a very real anxiety that many plus size individuals have about eating in public. There’s even a sexist undertone to the compliment, one suggesting that women shouldn’t eat a lot and that there’s something wrong with those who do.

6. You’re So Lucky To Have Curves; You Can Pull Off The Pin-Up Look

7. I Really Admire The Courage It Must Take For You To Wear A Bathing Suit In Public

Much like the first point on this list, compliments like this suggest a deep-seated problem with the North American culture of body shaming. A statement like this isn’t genuinely celebrating different shapes; rather, it’s suggesting that plus size women should be ashamed of their bodies, so much so that they shouldn’t be willing to show any skin in public. It’s derogatory, it’s not a compliment, and if you don’t like my fatkini, then it’s a good thing you’re not the one wearing it.