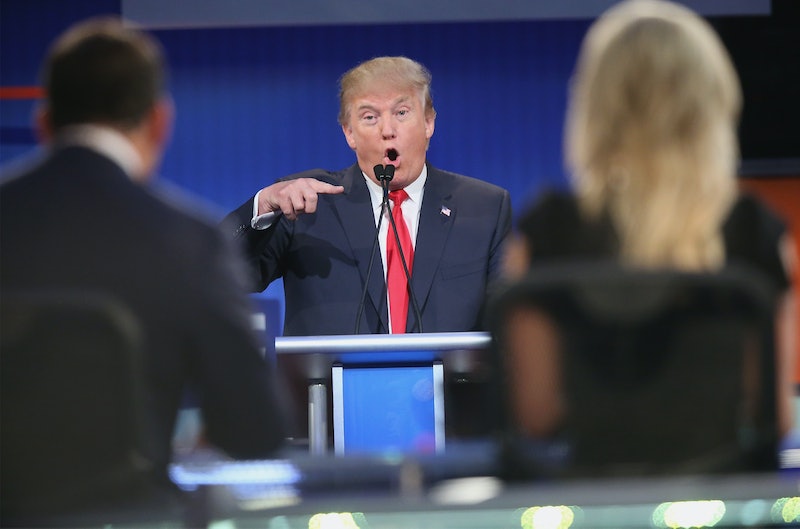 Donald Trump has attempted to address his sexist comments about Megyn Kelly following the GOP debate on Thursday night. The Republican frontrunner took to CNN on Friday to denounce Kelly's questioning of him during the debate, stating that "there was blood coming out of her eyes. Blood coming out of her wherever." Trump again returned to CNN to clear up what he meant, offering no apologies whatsoever. Instead, he attacked other candidates and boasted about himself as well as his hiring and business practices with women. No, Donald Trump does not cherish women; he's just sidestepping the question of why his comments were offensive.

In an interview on CNN's State of the Union on Sunday, Trump had this to say about the comments:

I cherish women. I want to help women. I'm going to do things for women that no other candidate will be able to do. And it's very important to me.

Even if alluding to menstruation wasn't Trump's intention, it was still excessive language that was used in response to just a mere debate question, which he claimed showed Kelly's "anger" toward him.

So I didn't even say anything, because I didn't even finish the thought. I was going to say nose and/or ears, because that's a very common statement, blood flowing out of somebody's nose. It's a statement showing anger. She had great anger when she was questioning me...

Regarding all that Trump thinks he can do for women, the candidate offers little. He's stayed fairly silent about equal pay and issues of equality, only recently changing his stance on abortion from pro-choice to pro-life based on a personal story from a friend rather than analytical data. His thoughts on women in business are equally puzzling. Trump once insulted Celebrity Apprentice: All-Stars contestant Brande Roderick, insinuating she'd made it thus far through sexual favors and told another contestant she'd make a good wife.

His legendary Twitter feuds also reflect a blatant disrespect of women. It was Kelly's question about Trump's comments against women via social media that reignited his long-running feud with Rosie O'Donnell. When Kelly listed off the countless insults Trump's lobbed against women, he interrupted to clarify that they'd only been made about O'Donnell and that it was all in good fun, despite the fact that the comedienne has stated publicly that the insults were the most she'd ever been bullied and understandably emotionally damaging. Repeatedly, Trump has proven that he's no friend to women, and it comes as little surprise that not much has changed in that regard.