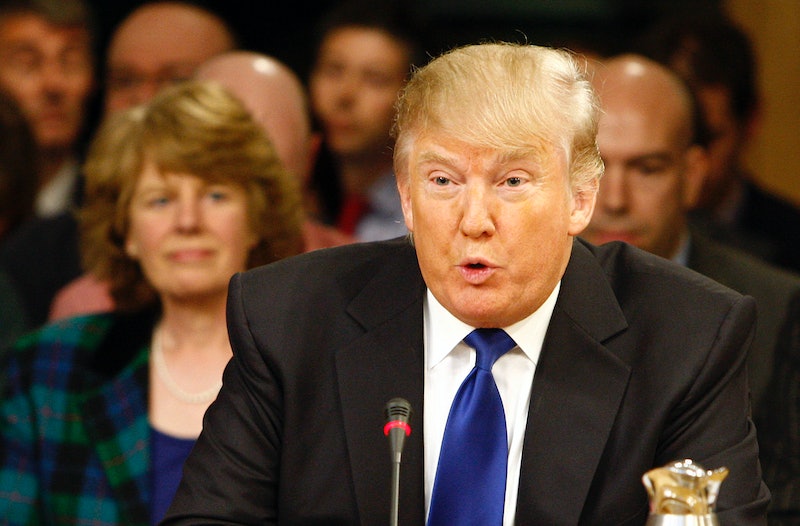 It's no secret that Donald Trump is a Twitter force to be reckoned with. The presidential hopeful boasts well over 3 million followers and has tweeted over 26,000 times since joining the social media platform in March of 2009. As of late, he's used the platform to detail his presidential aspirations and campaign goals. He's best known for something far less constructive, however. When it comes to social media, Trump's best Twitter feuds are what truly stand out. The Donald has taken on seemingly everyone who's ever tweeted, even if they don't necessarily respond.

Sometimes these feuds spill out into real life, though there have been plenty of instances where nothing more came from an angry Trump tweet. On Wednesday, Trump issued yet another feud-worthy tweet against an entity that will most likely pay him no mind — the New York Daily News. Trump said the paper lacked "gravitas," questioning anyone who'd want to purchase it and begging the world to let it die. If his incessant ire on Twitter is any indication, the Donald will certainly make for an entertaining debater once the primaries roll around. To get you in the Trump tweeting spirit, we present the Donald's seven most notorious Twitter feuds, in no particular order.

This wouldn't be a Trump Twitter feud list without the most notorious one of all between the Donald and comedian Rosie O'Donnell. As per usual, it all started with an unsolicited Trump tweet directed at Rosie about a very personal matter: her then-burgeoning relationship with Michelle Rounds. While Rounds has been O'Donnell's wife since 2012, the fiery Twitter feud in particular dates back to 2011 and only truly flared up while O'Donnell was a co-host on the View and regularly talked of her troubles with Trump. O'Donnell initially called out Trump years before, calling him a "snake-oil salesman" for allegedly using an underage drinking scandal in the 2006 Miss USA pageant as a ratings grab.

Over the years, Trump's attacks have continued to be very personal, poking fun of O'Donnell's appearance and talent. In 2014, it almost looked as if they'd reached a truce when Trump tweeted out a link to an interview O'Donnell gave with the Daily Mail in which she described their incessant fighting as "the most bullying I ever experienced in my life, including as a child." The real estate mogul gave a meager, "No offense, and good luck," before insinuating that O'Donnell had started a feud that is still occurring, as you can see from the tweet above.

This brief and bizarre feud between two billionaires started when Trump slammed T-Mobile CEO John Legere for what he saw as shoddy cell coverage in New York City. Little did Trump know, Legere was actually staying in a Trump Hotel when he got the tweet and immediately checked out, despite praising their customer service skills earlier, according to The Verge. Legere appeared to take the fighting words in stride and Trump was surprisingly quiet after the CEO tweeted that his new digs were far better because every item hadn't been branded by Trump. After all these years of anger, could the Donald be softening?

Not if Cher has anything to do with it. The prolific songstress has been on a Twitter tirade against Trump ever since he announced his candidacy Tuesday. She's called him a bigot, an idiot, and said she'd move to Jupiter if Trump somehow was to be elected. Trump, for his troubles, has been incredibly quiet, though it has been a good three years since the two were actively feuding. Cher, who's incredibly liberal, tweeted some fairly similar statements about Mitt Romney as she did about Trump when he announced his presidential aspirations, kicking off the social media scuffle.

Trump decided to defend Romney after seeing what Cher had to say, then went on to personally attack her. Things further devolved when Cher had a minor freakout after finding out Macy's sells Trump's line of clothing and cologne. They still do, and Cher probably doesn't shop at Macy's anymore, as she'd threatened. As of this writing, Trump has yet to address Cher's latest Twitter-based attacks and Romney has yet to defend him.

Yet another billionaire feud bubbled up between Trump and a fellow rich dude, this time Dallas Mavericks Owner Mark Cuban. Cuban had dared Trump to shave his head for charity. Trump didn't bite and took the challenge as an insult. According to Forbes, Cuban only approached Trump about the shaving challenge to counter Trump's offer of money for some of the president's most personal records, namely passport and college information. Instead, Trump slammed Cuban over a canceled TV show and his failure to acquire a baseball team, which is probably the only time either has lobbed legitimate insults in the history of Twitter. Both billionaires might be on decent terms because Trump recently quoted Cuban, but Cuban has stayed quiet about Trump's presidential announcement and really anything Trump-related since the fight.

Trump probably isn't much of a night owl if his initial tweet against seeing comedian Russell Brand on a late night TV show mentioned the wrong one. He then followed that up with some typically classless statement, insinuating that former wife Katy Perry was inebriated when she married Brand. Rather than continuing with name-calling, Brand instead went with evidence-based insults. He tweeted an article to Trump that connected the mogul's self-made man status with the ugly truth of inheriting a huge fortune from his father. Trump responded by tweeting to Perry, pretty much congratulating her for parting ways with the comedian and calling him "a dummy who is lost!" Who knew the Donald was big into pop music?

Pittsburgh rapper Mac Miller may have been the first and only one on the Donald's hit list to turn a feud into a net gain. When Miller released his song "Donald Trump" in 2011, Trump wasn't exactly flattered. Instead, he threatened to sue Miller, called him "little" repeatedly as well as ungrateful. Amazingly, Miller never engaged. All he asked was for Trump's friendship and somehow in some far off distant communication source that isn't Twitter, the rapper got just that. Now when you search for Trump tweets referencing Miller, you'll get some seriously positive retweets and even a bit of encouragement from Trump. He's still calling him "little," but Trump is holding out for another hit and may very well now be a fan of Miller's music.

Trump is a surprisingly relatable candidate for the sheer fact that he has an awful lot to say about pop culture. His thoughts on Danny Zuker, an executive producer of Modern Family, are surprisingly savvy. In lobbing insults against Zuker, Trump even makes a pun about the producer's past works being "'stacked' with failures," referencing a failed TV show starring Pamela Anderson that Zuker had a hand in. Zuker essentially started the Twitter war, insulting Trump while retweeting Trump's announcement that he'd be on Fox & Friends. According to Zuker, the appearance was no better than a Family Guy re-run. Trump responded in kind and the two traded insults for weeks. The 2013 feud ultimately fizzled after Zuker stopped engaging, but you can tell by the tweet above that Trump was actually having fun sparring this time. Perhaps he'll get just as much enjoyment debating his fellow candidates if it ever comes to that.

More like this
Camilla Paid Tribute To The Queen In A Heartfelt Video Message
By El Hunt and Sam Ramsden
Here’s Everything You Need To Know About Operation London Bridge
By Bustle UK
Confusion Reigns After Kanye Changes His Instagram Profile Pic To Kris Jenner
By Jake Viswanath
The Try Guys Cheating Scandal, Explained
By Grace Wehniainen
Get Even More From Bustle — Sign Up For The Newsletter