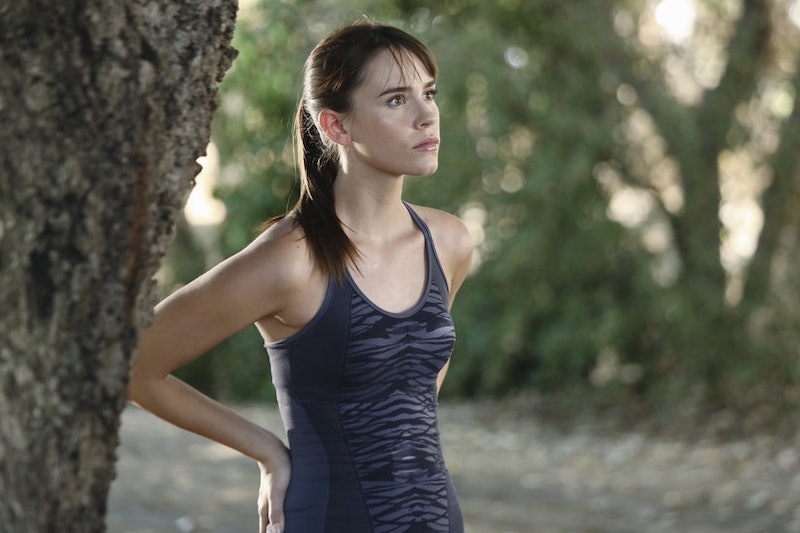 Charlotte Grayson has officially gone from the worst to the best. On Sunday night's episode of ABC's Revenge , the youngest Grayson finally realized how badly her mother's brand of meddling can ruin people's lives. And thankfully, she had an epiphany — which gives us some hope that at least one of the Graysons will turn out alright after Emily Thorne's scheming comes to its climactic end. Charlotte showed that she has the potential to be a much better person than her parents — she acknowledged and is trying to learn from her mistakes, so Emily should really feel bad about hurting/lying/using her all of this time.

It was always really hard to actually like Charlotte Grayson, even after we found out that she'd been lied to her entire life and that Conrad wasn't actually her father (her real dad was David Clarke). When the series began, she was a spoiled rich brat who would've fit right in with Blair Waldorf and the rest of the girls at Constance. She had less than zero redeeming qualities: Charlotte spent most of her screen time whining, getting addicted to drugs, dating Jack Porter's little brother Declan (aka Erik van der Woodsen — see, I told you she'd fit right in), going to rehab, and fighting with her parents as often as possible. In short, she was almost as bad as Dana Brody in terms of TV children to hate-watch.

When Emily had her priorities completely straight (during Season 1), she didn't really figure Charlotte into her scheme. Mostly because she felt bad for her and felt a kinship for her after finding out that she was her half-sister. Neither of them ever got an opportunity to know their father, but at least Emily had his journals. Charlotte only had the lies Conrad and Victoria fed her about David Clarke's terrorist past. But somewhere along the line, Emily stopped feeling bad or feeling anything at all towards Charlotte — and that's a huge problem.

At this point, we're starting to wonder whether or not we're actually on Emily's side anymore, because she's spinning so close to Grayson-level scheming. How she's treating Charlotte makes matters worse. Jack called her out on it earlier this season, when he made it a point to remind Emily that even though she was raised a Grayson, Charlotte is her sister, so she shouldn't be used. Emily took their relationship for granted, and then was upset and taken aback when Charlotte wanted nothing to do with her and decided to break up her engagement to Daniel. But it's exactly what Emily deserves for taking advantage of Charlotte's desire to be close to her as a friend and surrogate sister.

For the past few weeks, Charlotte's been throwing all of her power into pushing Daniel and Sarah together and Emily out of the picture — until tonight. Emily's pregnancy bombshell safely returned Daniel to his place under her iron fist, and Charlotte realized that all she'd done by getting those two together was hurt them and change their lives for the worse. And, like any good person would, she felt terrible about it. She realized that she'd hurt her brother, hurt Sarah — who'd already been paralyzed and essentially robbed by her family — and hurt Emily. (Even though Emily doesn't care at all.) So, in an effort to change, Charlotte let Victoria know that she plans to move out of Grayson Manor and never meddle again.

What bothers us the most about Emily and Charlotte's relationship, especially after Sunday's episode, is that Charlotte has actually always made an effort to build a relationship with Emily. She apologized Sunday night for being a terrible maid of honor and tried to make it up to Emily by bringing the spa to her house for a pre-wedding mani/pedi. As she told Emily, "We are sisters after all." As usual, Emily made that face that looks as though she's struggling between spilling her secret to Charlotte (that she's actually her sister, the real Amanda Clarke) and the fact that she's in far too deep to let her emotions get the better of her now. It's sad, really, because as bad as Emily feels, she can't help but continue to use Charlotte in her plans. But Charlotte has enough problems without her own flesh and blood making her life hell.

So after nine episodes, Charlotte's gone from vile and vindictive to repentant and on the path to being a normal, good human being. And that's a lot more than what can be said for every person she's related to. Emily's guilty, "deer-in-the-headlights" face, which she uses Charlotte tries to build a relationship with her, is totally right — Emily should feel bad for Charlotte. She should feel really, really bad because she's using her to get "revenge for her family" when she's got family right in front of her.

More like this
Everything To Know About Netflix's 'Bridgerton' Prequel
By Brad Witter, Alyssa Lapid and Radhika Menon
Everything To Know About Marvel's 'Echo' Series On Disney+
By Grace Wehniainen
20 Photos From The 'Stranger Things' Season 4 Premiere To Make You Feel Old
By Alyssa Lapid
Marvel's 'She-Hulk' Trailer Is Finally Here & The Hulk Lends A Big Helping Hand
By Grace Wehniainen
Get Even More From Bustle — Sign Up For The Newsletter