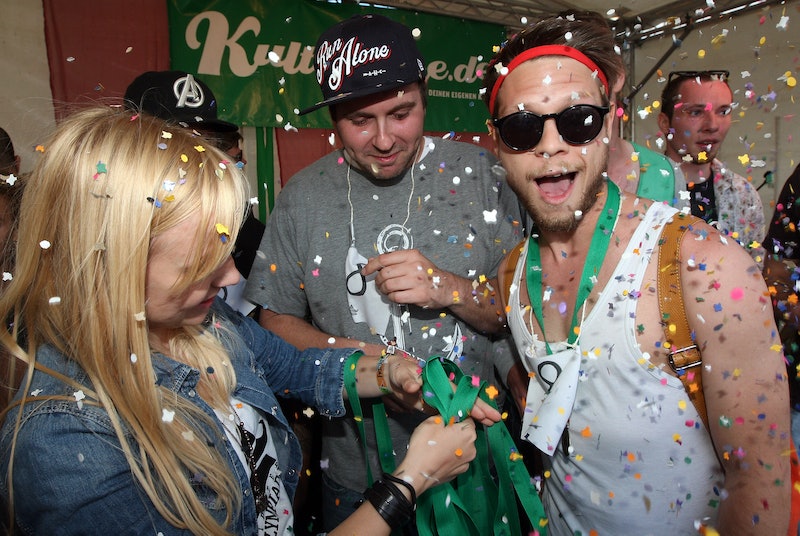 Not all content on the Internet is created equal, and it just so happens that while some things immediately capture our collective interest and launch themselves straight into the viral stratosphere, others... well, simply don't ever take flight. And then there are those that somehow go super viral super fast, and yet leave many of us scratching our heads as to why. Take the viral craze "yeet" — a word you've likely heard sweeping social media lately. But if you're still wondering what "yeet" actually means, you're definitely not alone.

First, let's take a look at what Urban Dictionary users have to say about it (because you know they're really the official word).

1. A new weird dance thing on Vine called #Yeet. It is a phenomenon that was started back in February 2014 but it didn't really pick up until a kid who goes by the name Lil Meatball posted a video claiming he can do it better than Lil Terrio. Lil Meatball is a 13-year old from Dallas, Texas.

2. A term made famous from a dance on vine and can now be used as an exclamation.

3. Term used to express excitement; especially used in basketball when someone has shot a three-pointer that they are sure will go in the hoop.

As you can see by these (very official) definitions, use of the word "yeet" has been steadily evolving over time. But let's allow a moment for the kid who really spring-boarded it to viral fame — Lil' Meatball himself:

Of course, as soon as the video went viral, what came to be known as the Yeet Dance was soon copied and remixed by dozens of Viners, making for some pretty hilarious videos:

As more and more people started to yeet, the name for the dance move slowly worked its way into casual conversation, as a new way to express excitement over something. For example, let's say you and your friends are dancing and one lands a flawless back flip. ('Cause you know; that could totally happen.) That would be your cue to yell out "yeet!" and let them know just how awesome they are.

But while the yeet certainly is unique, it's not the first dance craze to go viral. Here are some other dances that people have fallen in love with in recent years, and then meme-ified forever and ever and ever:

We all remember "Superman-ing that hoe" from Soulja Boy's one-hit-wonder "Crank That," a dance move performed by countless young (and brace-faced) middle and high schoolers back in 2009. It was simple enough that everyone was able to pick up on the handful of dance moves and work them into whatever else they were doing. Though I was, admittedly, a part of that craze myself, I sure am glad it's over now.

Ever since Queen B launched the "Do-You-See-A-Damn-Ring-On-This-Finger?" hand movement, everyone is trying to get wifed up via this popular Beyonce dance. Is there anything she can't make us do?

The Harlem Shake, a song by Baauer, quickly turned into a dance craze after this group of young, ambitious men made this video depicting the strange dance. Here's how it typically goes: One person in the room (usually wearing a mask or facial cover-up of some type) will start dancing as the song winds up, while everyone else seems disinterested or absorbed in their current work. As soon as the song drops, the video cuts to everyone in the room dancing crazily. It was certainly fun while it lasted but there were only so many more renditions the world could take.

The Wobble — which is the easiest dance move in my opinion — should have lasted far longer because of its sheer simplicity and good-natured, upbeat attitude. But oh, well. R.I.P. Wobble.

Interestingly, the most recent viral dance craze combines a variety of other popular dances, into one — and created one mega-viral dance video, too. Plus the song is catchy as hell, even though it may be a bit repetitive and pop-y.

Though these dances have may silly names like "wobble," "yeet," and "whip/nae nae" they sure have managed to take social media by storm and make us hands-down obsessed. (OK, if only for a week or so.) Oh, the beauty of a good viral video...