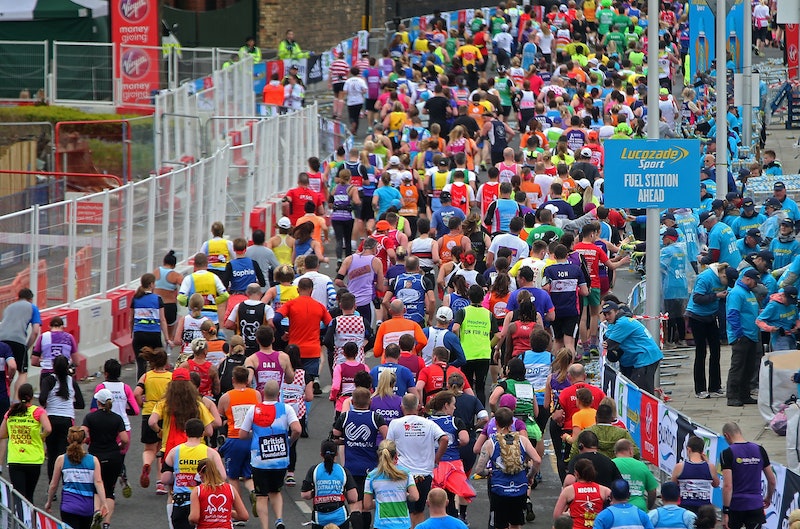 In an article for Absurdist about running the London Marathon, Kiran Gandhi asks, “Yo. Have you ever run a marathon on day one of your period?” Gandhi did just that last April when the runner ran the marathon while bleeding freely through her clothes. Gandhi’s decision ­— along with photos of her running the marathon with blood clearly visible between her legs — have sparked a debate about periods and period shaming, with some arguing that her run was a bold feminist statement, and others convinced that bleeding without a pad or tampon is inherently gross.

Gandhi explains in Absurdist that after training for her first marathon for a year, she started her period the night before the race. After considering her options, she decided to go without a tampon, reasoning that, if she's running 26.2 miles, she should get to do what she wants:

If there’s one person society can’t eff with, it’s a marathon runner. You can’t tell a marathoner to clean themselves up, or to prioritize the comfort of others. On the marathon course, I could choose whether or not I wanted to participate in this norm of shaming.

Gandhi writes that she chose to bleed freely and visibly in order to draw attention to the absurdity of the fact that half the population is expected to keep this entirely normal bodily function hidden away and to highlight the fact that many women around the world — including women in the United States — don’t have reliable access to tampons or sanitary pads. She writes,

A marathon in itself is a centuries old symbolic act. Why not use it as a means to draw light to my sisters who don’t have access to tampons and, despite cramping and pain, hide it away like it doesn’t exist?

Unsurprisingly, many internet commenters and Twitter users have chimed in to effectively say, “Eww.” Gandhi, however, isn’t fazed by critics, telling BuzzFeed,

I don’t feel personally offended by their opinion, as it’s a normal, human thing that 50% of the world goes through. The fact that simply showing people that it exists, and that it made so many deeply uncomfortable, is the point.

Bleeding freely may not be the right choice for everyone (nor do I think that Gandhi is suggesting that all women should throw out their tampons and pads), but Gandhi’s actions have opened up a necessary discussion about period shaming and the need to be more open and honest about menstruation, which, in case it bears repeating, is a completely normal thing that half the population experiences every. single. month. As Gandhi points out in her article, women around the world are routinely censored and shamed for their periods (Hell, remember that time an actual GOP presidential hopeful attempted to shame his female debate moderator by seeming to imply that she was menstruating? That was only LAST WEEK.), and for many women who lack affordable access to period supplies, periods can be a major, often undiscussed, roadblock to education and work. If we are weirded out by the sight of menstrual blood in Gandhi’s photos, then we need to ask ourselves where that discomfort is coming from, and why it has power over how women conduct themselves.