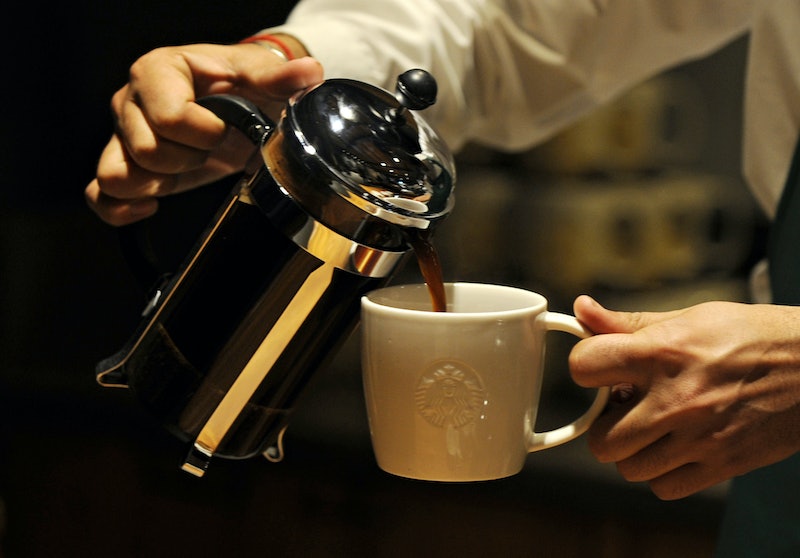 Ah, the age-old question: Is it okay to drink leftover coffee? Most regular coffee pots are way too big for one person to drink one morning alone, so it's bound to come up. Food52's Leslie Stephens wondered herself if there were any risks to fighting the 4 p.m. slump with 8 a.m.'s brew, so she took one for the team and did some Googling. As it turns out, the answer is more complicated than we thought, hinging on factors such as how old the coffee is and what was added to it.

I've done my best to distill all the information out there, both from Stephens' exploration and my own, into a handy guide on when to drink leftover coffee — but since I'm generally pro-coffee and anti-waste, my short answer is, yes. It is OK to drink leftover coffee. But hey, if leftovers are not your thing, brewing a new pot is also OK, because the general consensus is that coffee is good for you — and in some cases, the more you drink, the better (within reason). One study even found that women who drank three cups of coffee per day were 19 percent less likely to get endometrial cancer than those who drank under a cup.

But when does a freshly brewed cup need to be the source of coffee's antioxidant powers, and when will an eight-hour-old pot do? Here are some factors to consider.

1. What exactly is in this coffee?

If you've already added milk and left the coffee out on the counter, you're out of luck. Hopefully, you already knew this, but drinking milk that has been sitting unrefrigerated for more than two hours is never a good idea — even if it's mixed with coffee.

There are two milestones in the lifetime of a pot of coffee. One occurs at the age of 30 minutes, when the coffee cools and loses flavor. The next is after about four hours, when the oils go bad and the coffee becomes more acidic. Unfortunately, heating up coffee in the microwave won't reverse these deteriorations in taste. But drinking hours-old coffee isn't dangerous, even if it might make baristas shudder. I wouldn't go for day-old coffee, though, given its potential to accumulate mold.

If you're going to risk recycling a cup of coffee with milk, at least try to minimize safety concerns by microwaving it, which kills some of the bacteria. It's not a perfect solution, though, so you're better off leaving your two-hour-old latte alone.

All in all, the answer to the question of your coffee's lifespan depends on where your priorities lie. If you're merely seeking a caffeine injection, hours-old coffee will do the trick, though you probably don't want to wait more than a day — or more than two hours if there's unrefrigerated dairy involved. If you're a coffee snob and will only drink the finest brews, however, your options are more limited, and you're better off brewing a new pot and drinking it within the first half hour.