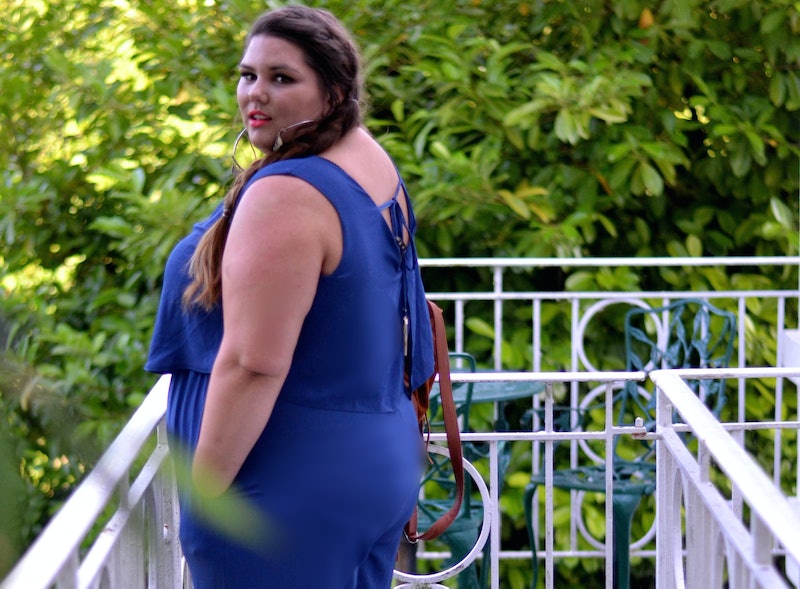 In the portal to madness that is the Internet, there's one breed of human that never ceases to make me laugh, scream, and stomp away from my desk in utter perplexity: the Internet troll. As a plus size woman and body positive/fat positive activist (and someone who regularly posts photos of her size 18/20 flabby bits on the Internet without embarrassment), the probabilities of my being shamed, bullied, insulted, concern trolled, or mansplained on the webosphere each day are pretty high. Infinitely higher, in fact, than the probabilities of Kit Harrington stopping me in the middle of an intersection, flipping me backward like in that iconic WWI picture, and proposing to me as a shooting star flies by in broad daylight. If there's one thing you have to figure out pretty quickly when you decide to be a public person in cyberspace, it's that you're going to get harassed. That being said, you're not going to be alone.

The thing about Internet trolling is that it seems pretty harmless, until it's not. Commenting on blogs or photos or Facebook articles is an opportunity for many people with many nasty opinions to express those opinions freely, without any foreseeable consequences. After all, you might not be able to get away with hate speech at school or in the office or in most safe, public spaces, but you can sure as hell get away with it online.

When your work is rooted in deconstructing hugely accepted ideologies maintained by your culture (ideologies like "fat = bad" and subsequently "fat people = bad"), trolling is definitely going to happen. Judging from the array of body positive bloggers, models, activists, writers, and spokespeople on my social media who regularly share screen captures of the worst messages they've received online, it's not hard to figure out that A: Humans are often awful, awful specimens. And B: There is a certain solidarity in knowing there are strong people out there fighting for the cause you care about and not letting the B.S. get them down.

All that in mind, I reached out to some inspirational members of the body pos/fat pos community to find out the most ridiculous comments these women have received. Some will make you LOL. Others might make you grimace. All are a reminder of just how effed up Internet trolls really are.

1. Stephanie Yeboah Of Nerd About Town

"A recent comment I received asked me if I could calculate how much taxpayers' money I've spent on me being fat so far, and how unfair it is to people who have to wait for beds and doctors as opposed to people who willingly submit themselves to being unwell.

To which I responded that the only time I had been admitted to hospital for being fat was when I was pushed off a building (by a bully who would constantly assault me because of my weight) and broke my back; my only fat related injury/problem LMAO!"

2. Substantia Jones Of The Adipositivity Project

"There have been many trollisms worthy of archiving, but this one stands out in my mind as one of the most hilarious. It came amid a cluster of death threats aimed at author Kim Brittingham and I, who were speaking at a college in Connecticut last October. The school increased security for the event, and the Hartford Police Department sent a detail. But ultimately, no one killed us in any of the ways they'd described online, and I was left with the fond memory of this proclamation, found in a hate forum: 'Nothing justifies terrorism against the U.S. more than adipositivity.'

There was [also] once an entire thread calculating the force and height with which one would push me into a body of water to achieve the desired impact. There were actual calculations. Numbers and shit. I wanted to suggest these guys take up knitting or some other time-consuming hobby. But alas."

"I entered a competition through Suicide Girls a few years back and one guy commented, 'Fat ugly fuck, should commit suicide!' How ironic."

"Someone said I was so pretty but I had the body of a retired Atlanta stripper. I died. I really did."

From a reactionary article to a post about going commando.

6. Callie Thorpe Of From The Corners Of The Curve

"The first thing that came to mind isn't actually a comment but an email I got a couple of years ago [...] This is pretty much the most memorable any Internet troll has ever been — it's hard to top this level of trainwreckage! This was around the time I wrote an IHTM on xoJane about finding myself in bed with a racist, and a post on my blog about dieting as a privilege (which somehow made it to Reddit) so I had trolls aplenty to deal with for a while. I removed the comment section on my blog shortly after I received this email, but before I did, there was one very memorable commenter who advised me, the fattest woman in India, to not let a single morsel of food pass my lips until I was thin. So those would be the two most memorable trolls among many who've graced my inbox with their unwanted presence!"

"1. 'Moo cow moo cow! You scare my young son!'2. 'This bitch look like a damn barrel.'3. One creative commenter imagined an elaborate and detailed wedding between me and the Stay Puft Marshmallow Man."

"I actually had a few run-ins last night and I was almost going to start a hashtag like 'take control against the trolls' or 'I won't be told by a troll' or 'too old to get trolled,' because I am so sick of the way they make me feel and the way that people think that you should just ignore them [...] two men who ganged up on me because one told me to not lose weight. I told him I wanted to lose weight and that him telling me not to lose weight was very nice but it's not something I was going to do. He turned really nasty and got his brother to message me abuse as well."

"I got told that they would have me on my knees, choking on cock until I begged for forgiveness [for being a fat activist]."

"I look and dress like Barney and I'd be better off dead. I am a land whale [...] and they should really harass my boutique and me more. Oh yah, also they called me a ham planet and a bacon factory and I am sitting here thinking, 'Hmmmmmm... bacon factory... bacon is awesome, trendy, and tastes soooo good.' So, yah, whatever a-holes. Bacon is super delish and so am I."

"I used to try online dating, and one guy told me, 'You're way too tall to be anyone's girlfriend, but we could be f*ck buddies.' I'm 5'9". Also, I'm a competitive athlete — Olympic weightlifting — and you hear constant comments from guys... 'Don't get too big. You'll look manly. That's not hot. Guys don't like muscular girls.' Women are still put down in the sport!"

"Someone once said it's unfair of me to have a BF while being fat."

I hear a lot of shitty things online multiple times a day — from men urging me to kill myself because my fatness is making them physically sick to other women urging me to lose weight so I can "find a good guy" to those who think it's downright gross for a plus size woman to wear a pink tutu. The worst type of comment for me, however, is the concern trolling. Worse than stupid people who've made it their mission to hunt fatties on the Internet for kicks are stupid people who think they're helping the fatties become better people by forcing them to come face to face with their "weight problem."

I received the above email a few months back from a dude who first complimented an article I had written, made a valid point about society being image-obsessed, and then encouraged me to... alter my image. He went on about health (assuming, of course, that my stance on fat positivism must mean I know and care very little about health), expressed that he had a food addiction, told me about his Diabetes, and then all about the bariatric surgeries both he and his wife decided to undertake. Finally, he encouraged me to opt for a gastric sleeve surgery myself, doing me the kindness of providing his doctor's info so I could reach out directly. My favorite bit, though?

"The surgery in itself is not a cure [for obesity], you still have to make better choices. The love of carbs and sugar has to go away. As a Latina I am sure that has to be a bitter pill to swallow."

Because I could tell that he genuinely believed himself to be well meaning, I responded calmly and eloquently (if I do say so myself) about everything that was wrong about his note. Most of my points were tied to his assumptions — assumptions about my diet, my knowledge, my awareness of health and body politics, my cultural heritage, my fitness levels, etc. I tried to explain that what he'd just done was just another form of shaming, even if it was accidental. I tried to explain that my body and my life just weren't his business. His second email was essentially just a copy of the first, so I gave up, put on one of my silly, "not-appropriate-for-fat-women" dresses, and moved on with my life.

For most of the women on this list, myself included, Internet trolling has become a standard part of the job description. We've learned to laugh at the hilarity and absurdity and ignorance of faceless specimens on Instagram and embraced being happy ham planets and land whales. However, it's certainly not easy to be OK with people challenging your existence on the daily. It takes serious effort (and sometimes it's downright impossible) to pull a T. Swift and shake it off when you're just, well, human.

Internet trolling isn't "harmless" for everyone. The hate you're posting on someone's timeline could have seriously detrimental effects, from crushing someone's mental health to skyrocketing their anxiety to fueling thoughts of suicide. To the trolls, it might seem harmless to comment on that Facebook post, thinking the author or blogger or model will never even know that they told her she was ugly or disgusting or a disgrace to humanity, but she probably will see it. Sometimes she'll be able to laugh it off, but sometimes... not so much.

So darling trolls of the web, next time why don't you just find a hobby instead? You told me once that cupcake-eating wasn't a viable pastime activity, but I beg to differ.

More like this
TikTok's "Would I Look Good With Short Hair?" Hack Is Genius
By Olivia Rose Ferreiro
Filming For 'Bling Empire' Season 3 Picked Up Right After Season 2’s Drama
By Gretchen Smail
Andrew Gray Returned To 'Bling Empire' In Season 3 To Make Amends
By Brad Witter
Amazon Sneakily Put These Popular Things On Sale: Here's What You Don't Want To Miss
By BDG Commerce
Get Even More From Bustle — Sign Up For The Newsletter