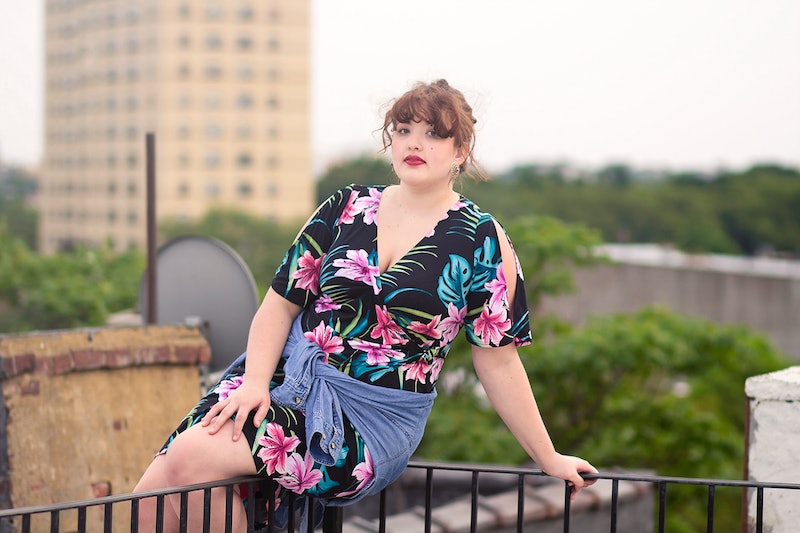 For much of my life, I occupied the physical and aesthetic space sometimes known as "small fat" (someone with noticeable chub, but who doesn't raise people's automatic fat-sighting flags). As neither a too-obvious fatty nor an "average-sized" girl, fat shaming comments followed me around endlessly. The ones doing the shaming refused (either consciously or subconsciously) to acknowledge my fatness openly, perhaps so they could talk about other people's fatness as casually as they pleased. All I know for sure is that the amount of times someone went on about the "fat b*tch" in evolutionary studies or the "fat-ass governor running the state" in front of my then-200-pound self wildly exceeded the amount of doughnuts adolescent and early-20s me consumed in a year — and that was a lot of doughnuts.

There are arguably few physical characteristics that make people's douchebaggery come into the limelight quite as much as fatness. Whether we're talking concern trolls, death threats, magazine covers, obesity memes, fat shaming forums, pointing and staring, playground bullies, grown-up bullies, the diet industry, or even the medical profession, fat shaming sometimes seems a more ingrained part of American life (and from my observations, that of most Western culture) than the Kardashian family.

Once in a while, the awareness that many, many people correlate being fat with being a generally awful, lazy, unhygienic, unhealthy, snarky, selfish person gets to be too much for me. During those times, I retreat into the sanctuary that is my red leather couch with a bowl of popcorn and an episode of some TV show so grim that my own grimness pales in comparison (as of late, A Young Doctor's Notebook ). Most of the time, though, I bounce back quickly, as I remember that standing up to fat shamers is probably a better use of my time.

I'm pretty convinced that a vast majority of people who fat shame don't realize they're doing it (although if you're sending someone a DM on Instagram that reads, "I hope you and your lard reserve of a stomach burn in the fiery depths of hell and never get to eat another cheeseburger again," you most definitely know what you're doing). That's why it's important to stop tolerating such comments. People can't be confronted with the stigmas or internalized fat hatred they're holding onto unless someone makes them aware that they're doing it.

So here are nine fat shaming comments to point out the next time you hear them (accompanied by photos of inspirational body posi and fat posi babes). Doing so will hopefully spark a discussion — and more critical, honest discussions surrounding the acceptance of people are never a bad thing.

Fat people are just like everybody else, which means that some fat people are going to be assholes. Why is it, though, that whenever a fat person is an asshole, their weight always, always, always ends up being correlated to their actions? Besides that one Meghan Trainor song and a few catty comments about "skinny bitches" uttered in high school halls, I've rarely heard people go on about "skinny assholes" or "slim jerks." And that's because one's weight has nothing to do with how nice a person you are.

When we attach the "fat" moniker to a derogatory comment, we're creating a correlation between being an asshole and having a visible belly outline, when the reality is that there isn't one. Next time someone waxes on about how the fat bitch on their morning commute likes to make half a dozen loud phone calls before it's even 6 a.m., keeping the whole train car awake at the crack of dawn, remind them that this woman isn't a jerk because she's fat. She's probably just a jerk.

When it comes to the intersection of body positivity and health, the simplest takeaway is this: You can't tell how healthy someone is by looking at them.

Unless you have a superpower that allows you to instantly detect someone's visceral fat versus subcutaneous fat levels, monitor their blood pressure and cholesterol, check their blood glucose levels, test their level of physical activity, and figure out what they're eating, heavily research our contemporary food supply, and do a full body analysis, I'm just not going to believe that you know anything about them, their lifestyle, or their actual health.

Even if you did have this superpower, and all signs pointed to a future of heart disease for whoever you're shaming, your actions aren't justified. Someone's level of health (or unhealthiness) is their business and theirs alone. In the meantime, though, why not educate yourself a little about notions of Health at Every Size? (Which, no, doesn't just mean, "Everyone is and will always be healthy because we live in rainbow-covered pixie land.")

The notion of "pulling things off" really needs to go, IMO. It essentially implies that someone's body type is only worthy of a select few styles, and wearing anything outside of those styles will result in dreadful sartorial sinning.

Whether someone is telling you that you can't pull off that bodycon because your gut will be too noticeable, claiming that they can't possibly wear a sleeveless dress because their arms are will look too fat, or complaining about a random plus-size woman rocking a crop top, just call their bullshit. Style has no size, and our respect for other people shouldn't either.

What? You mean you don't like my sweaty rolls or deep belly button or flabby arms or cellulite-y ass or thunder thighs or double chin? That's OK. You don't have to.

Beauty is such a subjective thing, and it's 100 percent normal to be attracted to certain body types above others. What's not OK is making someone feel anything less than human because of their body type. By saying "Fat is gross" or asking "Who would want to look at all those rolls sticking out all over the place?" not only are you criticizing a whole group of people and placing your body type above theirs on a pedestal of made-up aspirational beauty, but you're also just being ignorant as fuck.

There are plenty of fat people who love their sweaty rolls or deep belly buttons or flabby arms or cellulite-y asses or thunder thighs or double chins. And there are plenty of people attracted to those traits in others. Sexuality and attraction are complex, but we're supposed to like different things.

5. "I'm too fat to do (insert literally any activity here)."

Usually, when I hear someone say they're "too fat to do something," it's coming from a person who isn't actually fat at all (hello, body dysmorphia), but who has been taught to believe that when you're above a size 8, your life just ends. It doesn't. Not only should you stop tolerating the comment (in an effort to help people get over their weird perceptions of weight and experience), but you should also stop tolerating the comment, because it invalidates all the rad things fat people are doing.

6. "I just don't understand why they let themselves go."

"Letting yourself go" can mean a lot of things to a lot of people, and can encompass mental health, hygiene, career prospects, etc. When I hear it, though, there's a 90 percent chance it'll be a reference to someone who's gained a bunch of weight (and I've certainly heard it directed at me plenty of times).

Maybe the person you're talking about hasn't "let themselves go," though. Maybe they've just found a way to exist that makes them happy. Maybe their weight gain is one of the best things they've ever done for themselves. Maybe it's a conscious choice and they don't need you to vocalize your opinion about their lifestyle. Even if it wasn't a choice, however, and they're genuinely unhappy with the transition their body has undergone, it's certainly not going to help them to hear trolls echoing that voice in their head already saying, "You're not good enough."

People have some very weird opinions about what 300 pounds (and even 200 pounds) looks like. Granted, there's obviously a lot of variation in height and body shapes from individual to individual, but the point stands. Whenever anyone throws around the, "It's OK to be a little thick, but not 300 pounds," ideology, I have no qualms with telling them that I'm closer to 300 than I am to 200. I have no qualms with directing them to the profiles of beautiful women on the Internet who also weigh more than 200 pounds. Oh, and I also have no qualms with pointing out that fat shaming someone because their weight isn't 199 or below is still fat shaming.

We don't get to decide what other people weigh. We don't get to use the number on the scale as an indicator of someone else's worth or moral compass or success or happiness. And we really shouldn't use it to dictate our own.

The next time someone says this to you, please stop them. Stop them immediately. Fatness and beauty are not mutually exclusive. They're just not. People have been taught to link fatness to a whole heap of negative stuff, from poor health to greed to ugliness. We can unlink it, though. The best response to this? "Actually, I'm both."

9. "Leave them alone. They're going through a struggle!"

I'm not saying it doesn't suck to be stuck in a body you don't want, but fighting fat shaming with this bizarre, almost reverse fat shaming isn't going to work any magic. It's a pity tactic, and it's probably only going to make already close-minded people either think all the fatties of the world are sick, and thus unhealthy, or that they're making excuses for their weight because they're "too lazy to go to the gym." Personally, I don't think fat people need anyone's pity. We just need everyone's basic respect.

This mentality ties in to comments like, "Deep down, they must hate themselves," as well. Whenever anyone assumes that a fat person must be miserable, or lying about being happy, or full of self-loathing, just ask, "Why do you think that is?" If the answer is only "Because they're fat," now's the chance to school them on the simple fact that you can be fat and happy.

It's not always easy to vocalize these thoughts in the moment, when your inner rage is rapidly increasing as your friend who's in medical school politely suggests that you use your elliptical machine a few extra times a week. It's not easy to vocalize these thoughts when you're in a room of people who've never really stopped to think about fatness outside of a tasteless joke in a sitcom. It's certainly not easy to vocalize them when you're surrounded by diet talk and a whole bunch of humans criticizing not just the bodies of others, but their own bodies as well. The struggle is part of it, though. Revolutionizing something as major as the way our society perceives beauty and difference was never going to be easy.

More like this
I Have Eyebrow Alopecia – & Microblading Gave Me My Confidence Back
By Jessica Morgan
Olivia Munn Got Real About How Her Body Hasn’t “Snapped Back” Post-Pregnancy
By Stephanie Topacio Long
42 Black Owned Fashion & Beauty Brands To Support Today & Always
By Mekita Rivas, Shea Simmons, Kui Mwai and Dominique Norman
13 Non-Toxic Sunscreens Under £35, So You Can Glow Responsibly
By Lauren Sharkey, Rebecca Fearn and Jessica Morgan
Get Even More From Bustle — Sign Up For The Newsletter