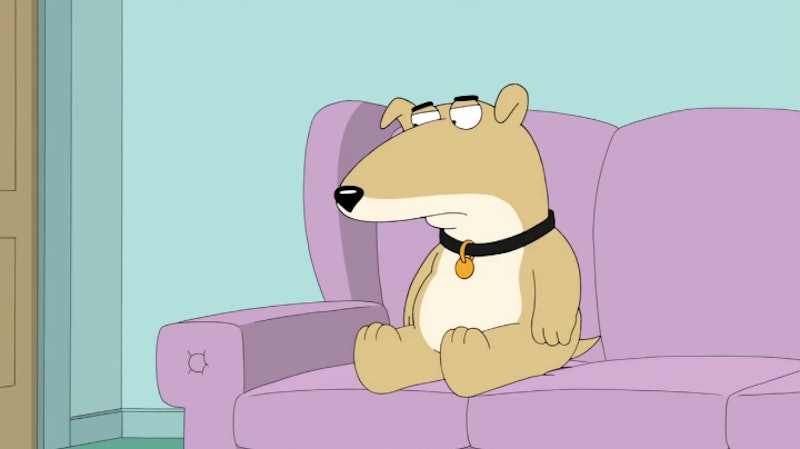 Whether or not the creators of Family Guy are bringing back the recently-dead Brian Griffin, they are definitely sticking to their story that he won't be returning. In Sunday night's episode — the first since Brian's fatal car accident on Nov. 24th — Vinny not only replaced Brian in body, spirit, and as Stewie's other, but he also took Brian's gold tuxedo in the show's opening song-and-dance number. The "All in the Family" riff that has had the Griffin family jazzed up since the show's beginning in 1999 was changed for the first time Sunday night with the addition of the Griffins' new dog, the much less intellectual, much more brash Vinny, voiced by The Sopranos' Tony Sirico.

I guess this is what executive producer Steve Callaghan meant when he said Brian's death was a way to "shake things up" on the show? Something about the immediacy of Vinny's inclusion in the show's intro really put viewers over the edge. Seeing Vinny take Brian's place was a different level of wrong for them, like seeing a dog walk on its hind legs. Family Guy fans who were already scandalized when Brian was killed were again re-horrified and took their shock to Twitter:

The replacement of Brian in the Family Guy intro made some fans physically ill.

Some people were so upset they didn't even think to check Twitter's trending topics to see if this mattered to any other fans!

No respect at all for the dead.

Luckily, there's a good chance that Brian will probably be returning to the show, thanks to the power of the Internet. Word to McFarlane and co: apparently the opening credit sequence is the most sacred face of the animated series, and it's NOT to be touched.

More like this
The 'Hocus Pocus' Sequel Finally Has A Release Date & It Makes Total Sense
By Shannon Barbour and Radhika Menon
9 Honestly Unbelievable Revelations From The WAGatha Christie Trial
By Frances Stewart
10 Eurovision Moments That Celebrate The Weird & Wonderful Camp Extravaganza
By Sam Ramsden
Oops! The 'Stranger Things' Monopoly Game Has Spoilers For Season 4
By Alyssa Lapid
Get Even More From Bustle — Sign Up For The Newsletter