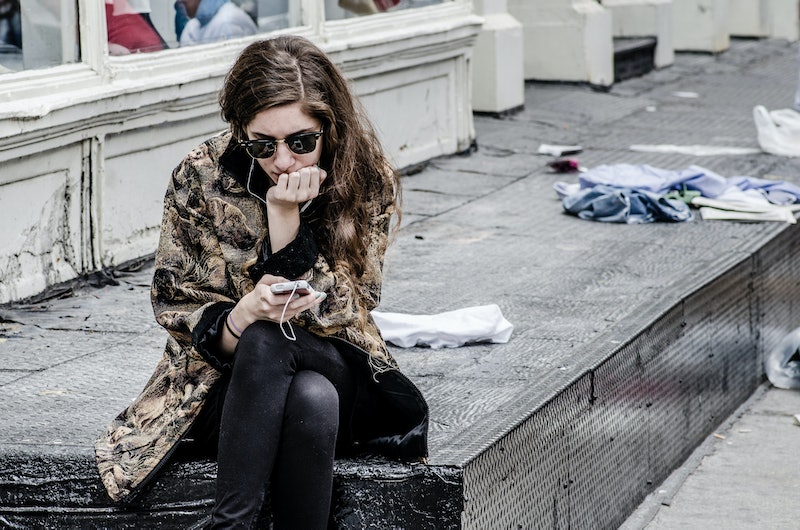 Is there anything more disheartening in modern dating than the phenomenon of “ghosting”? You meet someone, you think they’re cool, maybe you hook up for awhile. Things are going along swimmingly until they just stop responding to your messages. Or they respond with vague platitudes about getting together “sometime,” only to never set a firm date. Or they — as my boyfriend did in eighth grade — tell you that they can’t come over to hang out tonight because the series finale of Beverly Hills 90210 is on. Yup. That happened.

Personally, I find ghosting to be the number one crazy-maker. Because I’m an obsessive person, as soon as someone started pulling away when I was still dating, I started freaking out. I would send 800 million text messages, call, show up at a dude’s house. In retrospect, those were probably not the best or most productive moves to take when I was trying to convince dudes not to disappear on me. Then again, none of those dudes would have been good partners for me either so… Guess it doesn’t matter?

But I’m gonna be honest: I’m not totally guilt-free when it comes to ghosting myself. When you’re the ghoster instead of the one being ghosted, it can just seem like way less stress to simply fade off into the sunset. It’s not a cool thing to do, by any stretch of the imagination, but I can’t 100 percent condemn all of the ghosts out there when I’ve definitely, definitely done it myself.

So how do you know when someone is ghosting on you? From someone who has both ghosted and been ghosted, here are some signs that your boo is not for your world much longer.

1. They Take Forever To Respond To Your Texts

If someone is into you, they respond to your messages pretty quickly. Unless you’re sending an inordinate number of texts per day and your definition of “forever” is like, three seconds, you can bet that a long response time means they’re thinking about disappearing.

2. They Don’t Respond To Your Texts

This one is pretty self explanatory. If you’re getting no response at all, they’re not thinking about ghosting: they’ve already ghosted.

3. They Make Noises About “Meeting Up Sometime.”

Vague plans = no plans. If they can’t set a date and a time, they’re not actually interested in meeting up.

If you do managed to get a slippery paranormal to make plans only to have them cancel? They’re ghosting.

5. They Say Things “I Have To Wash My Hair That Night.”

In the days of regular visits to the hair salon, this was a common one. When I was in eighth grade, the series finale of 90210 was one. Point being: If they’re making all kinds of excuses when you’re trying to make plans, they’re ghosting.

6. They Never Want To Meet In Public

If you don’t exist outside of the bedroom, it’s that much easier to disappear from your life. In this situation, you’re both the ghost: you because you don’t exist to them and them because they can drop you quickly, with no social consequences.