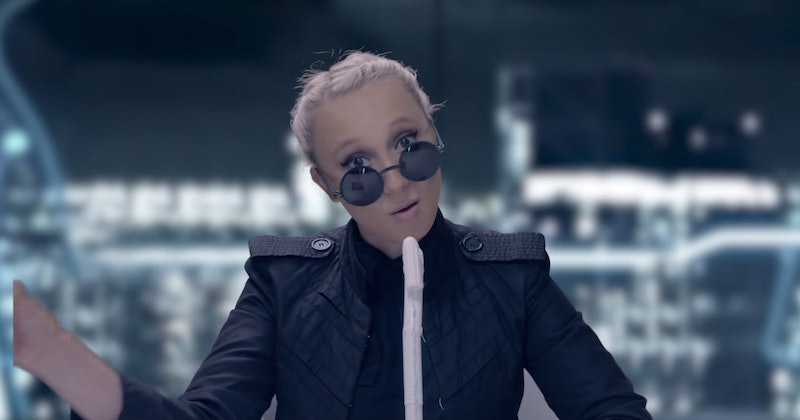 "Bad Blood" may not have been inspired by particularly well-intentioned events, but it just got entirely repurposed in the best way. Comedians Cariad Lloyd and Jenny Bede just released a "Bad Blood" tampon parody protesting the tampon tax in the UK, and it got realer (and bloodier) than Taylor Swift's version by tenfold. The performers recreated a ton of the video shot-for-shot, and as if that isn't already an insane enough undertaking, they changed all of the words to cleverly protest the enduring 5 percent tax on tampons, which are still regarded a "nonessential item" by the European Union.

Although activists have made some major strides in the taxation of tampons — in 1973, they were taxed at a whopping 17.4 percent, a number that wasn't reduced until 2000 — activists are calling for a reclassification of tampons as an essential item, and the end of tampon taxation. Prime Minister David Cameron said that although he would like to change the tax in the UK, the decision is ultimately in the hands of the European Union. "This is a long-standing campaign. I have had a look at it in the past. It's quite difficult," he said to a student in February. "Some VAT things you can change. Other VAT things, if they're linked to other products, it's quite difficult to do it within the framework of European laws and I can't remember the answer."

The EU might not feel particularly motivated to eradicate the tampon tax, but hopefully through work from activists like Lloyd and Bede, the issue will get the attention it deserves. In any case, their pun game is so strong that they deserve all the internet fist bumps in the world. Here are just a few of the ladies on their menstrual squad:

Say it five times fast. There you go.

Holding one of the many untaxed items in the UK that are "more essential" than tampons.

These look like ladies who GET. STUFF. DONE. And if there were any doubt of that, please observe what is bound to go down in history as the most badass move of all time — taking a shots out of menstrual cups:

BOW DOWN. Here's the full video: