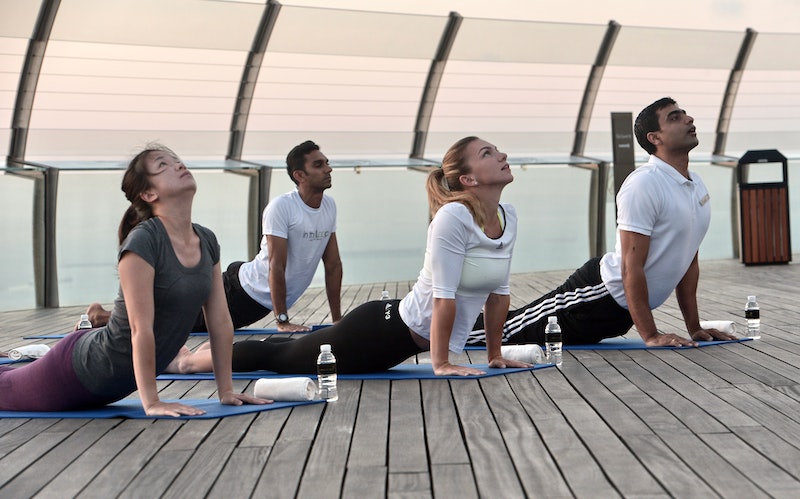 Have you ever wondered whether yoga is actually as good for you as everyone says? Researcher Dr. Holger Cramer recently decided to put the question of how safe yoga is to the test — and although the answer may not be completely surprising, it's still worth taking a look at. Titled "The Safety of Yoga" and published in the American Journal of Epidemiology, Cramer's latest study examined the red flags about yoga safety that have been raised "in the lay press" using a meta-analysis of previous literature, determining once and for all whether or not yoga is, in fact, safe. Spoiler: Of course it is, as long as you take the same precautions you would with any other form of physical activity.

Plenty of safety concerns about yoga having been raised in recent years, especially since the publication of the "How Yoga Can Wreck Your Body" article in the New York Times in 2012. There's also no shortage of articles present if you look up "the safety of yoga" on Google, showing that people really are pretty concerned about how safe yoga is.

For this meta-analysis, Dr. Cramer and his team examined studies that were only randomized controlled trials, which are considered to be among the highest quality research in the scientific community. The studies they used — 94 studies in total, comprising a collective 8,430 participants — all had a control condition and looked at both the prevalence of yoga injuries and active treatment in yoga itself.

Guess what the researchers found? Surprise! Yoga isn't any more dangerous than any other form of physical activity. In the 94 studies they analyzed, only two percent of people who practiced yoga faced any negative effects — and those who did also already had serious diseases that weren't connected or to or developed as a result of doing yoga. More serious injuries were also extremely rare; less than one percent of the participants stopped doing yoga due to injury. So guys, if you're worried about injuring yourself by doing yoga, please let your anxieties go.

But wait! There's more! The researchers actually found that practicing yoga can even benefit those with certain types of chronic pain. “We have really high-quality studies showing that yoga is effective for chronic low back pain in the short and long term,” Dr. Cramer told TIME. He also noted that there was a good amount of data supporting the idea that yoga can help manage depression and psychological distress, as well as some evidence that it can help to reduce the risk of heart diaeresis and lower blood pressure in people with high cholesterol.

So, if you had any questions about the safety of yoga, you can now put those fears to bed. Now who's up for a little sun salute?