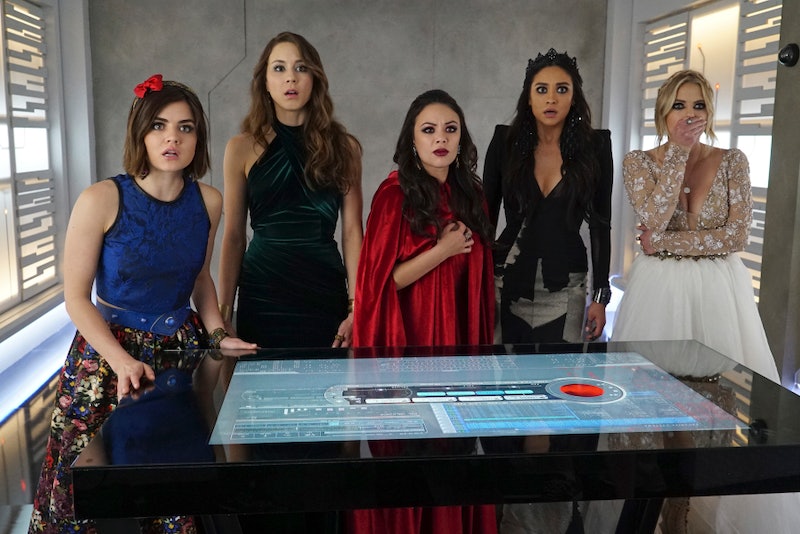 We are currently sitting in a big pile of unanswered questions. We all saw this coming, right? The first half of Pretty Little Liars season six has been advertised as "the Summer of Answers," but even after the finale's never-ending stream of reveals, fans were still left with loose threads. So many loose threads that I had to enlist my fellow Bustle staffers Kelsea Stahler and Martha Sorren to deal with the huge reveal that CeCe Drake is Charles/Big A. We still have so many unanswered questions about Pretty Little Liars. For a show that has promised us so much in the past few months, this is a pretty disappointing spot we've found ourselves in. Not only is the big twist wildly problematic, but it also goes directly against what the show's writers said after the Charles reveal at the end of season five.

At least as of Tuesday night, we can officially say that we know almost every large detail. Beyond CeCe being Charles, the summer finale also revealed that Sarah Harvey is both Red Coat and Black Veil (sorry, Melissa Hastings theorizers). I know, it's a lot. So what exactly was left open-ended?

Below are some of the questions Pretty Little Liars has left us with in the wake of the Summer of Answers. But first, check out Bustle's podcast Taking This One To The Grave for more on this twisted season.

2. Did no one realize that making CeCe Big A would upset literally everyone?

3. Did no one realize that making Big A transgender would be extremely problematic?

4. Does anyone believe that this storyline was really planned three years ago?

6. Are we still supposed to care about Rhys?

8. Where did they take CeCe?

10. Was Ali teaching at Rosewood High?

11. Why does Ezra have a pirate mustache in that flash-forward?

12. How did Bethany end up at the DiLaurentis house?

13. Wait, what was "wrong" with Bethany? We didn't really get an explanation.

14. So is Melissa really not involved?

15. How did A get so much done with just one helper?

17. Did Sarah really have feelings for Emily?

18. Wait, seriously, how did A know all the right stocks to invest in, to the point where she can afford supercomputers?

19. No really, when did PLL become Tron?

20. Seriously, what the hell was going on with that computer in A's lair? That was unreal.

21. That thing had to cost like, at least a million dollars.

23. Since when is that how mental institutions work?

24. How did Mrs. D just let the Jason/CeCe relationship keep going once she knew what was up?

25. Is anyone concerned about the fact that the moms are still in the DiLaurentis basement?

26. Seriously, are they going to get out before the time jump?

28. Why in the world would anyone else still be after these girls?

32. If Allison is married, what happened to Lorenzo?

33. SERIOUSLY, WHO IS BEACH HOTTIE?

34. Are Toby and Spencer broken up in the time jump? He looks pretty lonely chilling with Emily ...

35. Seriously, what is even going on?

37. Seriously, in what world is this how the #FacetoFace finale went down?

38. What was so wrong with the "Wren is A" possibility?

41. Should we even keep watching this show?

Need a laugh after that finale? Watch "'PLL' virgins try to explain who 'A' is" (and follow Bustle's YouTube channel for more hilarious videos!):

More like this
'Tell Me Lies' Season 2 Is On The Way & The Cast Already Has Ideas For What's Next
By Gretchen Smail and Grace Wehniainen
The First Trailer For 'That '90s Show' Includes So Many Nods To The Original Series
By Jack Irvin, Alyssa Lapid and Grace Wehniainen
Ava DuVernay Thought The 'Queen Sugar' Series Finale Felt “Really Satisfying”
By Brad Witter
Elizabeth Debicki On Her Approach To The Most Debated Scene From 'The Crown'
By Grace Wehniainen
Get Even More From Bustle — Sign Up For The Newsletter