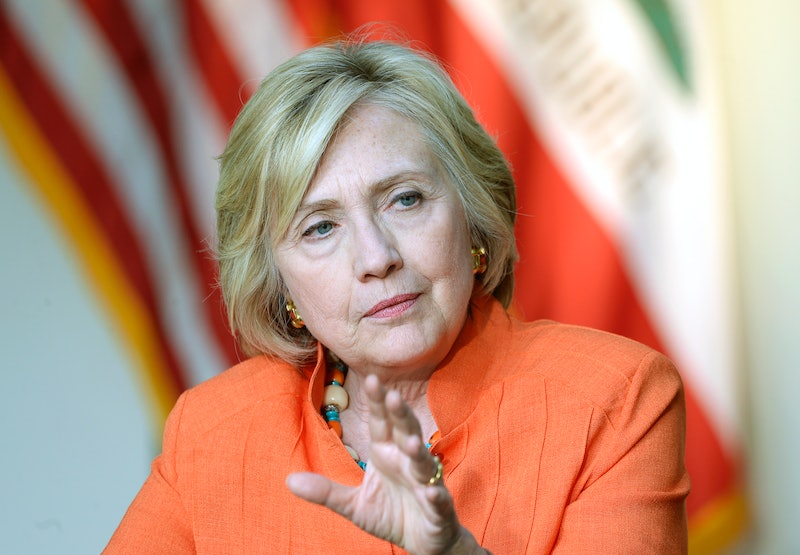 Democratic presidential candidate and former Secretary of State Hillary Clinton will turn over her private email server and all emails related to her official government work to the Justice Department, CNN reported Tuesday. The server, which is stored in the Clintons' home in Westchester, New York, will be given to the DOJ, along with a thumb drive containing copies of the emails, according to TIME magazine. Clinton signed an affidavit on Monday, swearing that she had turned over any copies of government records during her time as secretary of state.

After it was discovered that Clinton had used a private email server during her four-year tenure as Secretary of State in the Obama administration, a federal judge ordered that 55,000 pages of some 30,000 emails be made public in batches every 30 days, beginning June 30. But many saw the slow trickle release of the emails as a distraction in Clinton's campaign for the presidency. A July 30 Quinnipiac University poll showed her approval rating had taken a hit since she first announced her campaign, with only 40 percent of those polled viewing her favorably.

Her spokesman Nick Merrill told CNN on Tuesday that his boss already had pledged to cooperate with the investigation into whether there was any classified information in the emails, "and if there are more questions, we will continue to address them."

Republicans, and some Democrats, have been highly critical of Clinton's use of the private server and continued to chide her Tuesday after the announcement. "If Hillary Clinton believed in honesty and transparency, she would have turned over her secret server months ago to an independent arbiter, not as a last resort and to the Obama Justice Department," Republican National Committee Chairman Reince Priebus said in a statement.

There was no reason given for the timing of the release of the emails and the server itself. But The New York Times reported earlier Tuesday, two of the emails reviewed by Inspector General I. Charles McCullough had been found to contain top secret information, but were not classified as such. McCullough reported his findings to the Senate judiciary committee.

The Washington Post reported late Tuesday an FBI inquiry into how emails were handled on the private server was focused mainly on the security of classified information, not on Clinton personally. The information in the emails included details about satellite images and electronic communications, the Post reported. It wasn't clear late Tuesday whether the remaining emails would continue to be released on the monthly schedule that the federal judge had previously ordered.

So how will Tuesday's decision to turn over the server affect Clinton's campaign? It's probably wise to get ahead of any potential damage, and be proactive, which is what Clinton has done here. The Democratic front-runner has struggled to keep her campaign focused on issues such as her new $350 billion plan for higher education, amid the swelling popularity of rival Democratic candidate Bernie Sanders and the highly visible Republican frontrunner Donald Trump.

With the order, Clinton has removed one arrow from the GOP's quiver as the election games heat up. Whether she ends up shooting herself in the foot remains to be seen.