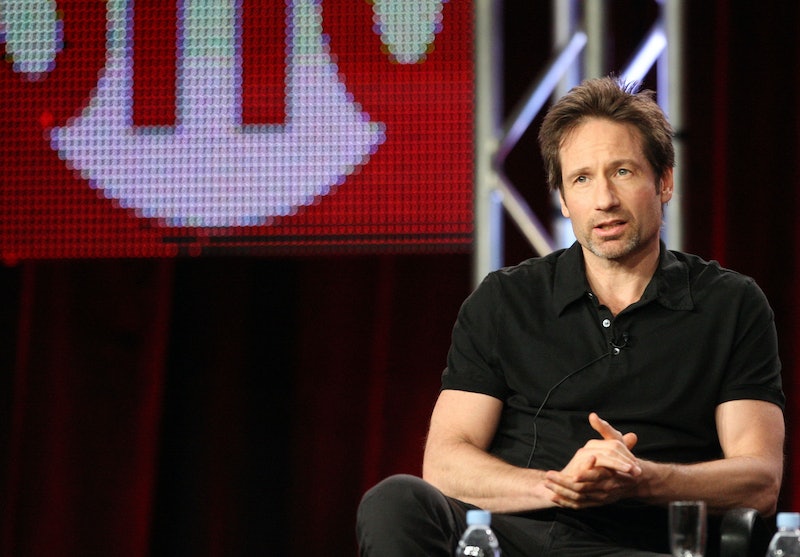 I think the last five to seven years of successful television will be known as the Walter White era of “heroes.” Characters who carry the weight of a series, captivate audiences, and have us in their corner despite the fact they are in nearly all regards, horrendous people. Your English teacher in college would have called it a Richard III complex. Hank Moody, the Lothario novelist (only believable because DAVID DUCHOVNY) of Showtime’s Californication is a Walter White/Richard III for premium cable who has a lot more sex (and not as good of writing) than either of those other terrible men combined. And yet, he was still lovable, still worth watching week after week. And so, it comes with mixed feelings to report that Californication will air its last episodes in April, 2014.

Showtime’s President of Entertainment David Nevin stated that the show will end up neatly for our (anti) hero and everyone in his life, “[Californication’s creator] Tom [Kapinos] has carefully planned the final chapter of Hank's journey and has brought it to a beautiful and satisfying conclusion for new and longtime fans alike."

I wonder though, what does Hank really deserve in the end? New and longtime fans who have followed the sexed-up, booze-crazy, drug-fueled broken hearts, broken families and broken promises that made the Hank Moody path of destruction, may have, like myself, watched it all unfold furrowed brows and an uneasy stomach.

Though he (most likely) won’t end up shot to dead face up in a meth lab like Walter White, it’ll be interesting to see where Hank’s story leaves off. Were it not for Mr. Duchovny’s bristly charm, I’d say “IN THE GUTTER WHERE HE BELONGS!” because cripes, Hank Moody and his gaggle of bad friends deserve more than a few law suits and swift kicks to the nuts. But, dang it, even my bleeding feminist heart wants the guy to turn around and do right by his family and friends. Not simply because of David Ducharming, but because Californication, at its best moments, also had a beating, bleeding heart.

Hank wasn’t the only thing I had a love/hate/love/SERIOUSLY OH MY GOD WHY AM I WATCHING THIS TERRIBLE BEHAVIOR BEING GLORIFIED ON PREMIUM CABLE — relationship with in the series. As Californication soon draws to a conclusion, here are the things I loathed, and loathed myself for loving.

Week after week, boob after boob, women were in so many cases treated like objects. Despite having a more talented cast and smarter writing, the shameless treatment of women often made half of an episode of Californication feel like the creators of Entourage made a show about the “other side” of the Hollywood table. And despite Hank’s two main squeezes, his wife and his daughter being the strong female core of the series, most other women, when not naked or performing felatio, were portrayed as ladder-cllimbing, fame-hungry “gold diggers.” The Kali plotline was also pretty overtly racist on top of being sexist. Gross.

Hate: All of that "casual" homophobia

Hank and Charlie made lots and lots of gay "jokes" to one another. I can't even begin to wrap my mind around how many times jokes were made about sucking another man's dick were made throughout the course of the series. Not to mention Charlie's "crisis" after engaging in sexual activities, with, GASP, a man. THE HORROR. Ugh.

That one special appearance he made on Sex and the City in the post X-Files years just wasn’t enough for my Duchovny fill.

HATE: Any and All of Charlie Runkle’s sex scenes

There were so many gross sex scenes in Californication. Some that are hard to shake off — like Hank being drugged by an ex who also drugged herself and then died. Or that whole plotline of Hank sleeping with students and under-aged starlets. The worst of the worst always fell on Charlie Runkle whose sex scenes were always, and I mean always horrendously degrading to the women involved. As he tried to disgustingly raise his number into the triple digits he spanked, bent over, verbally abused, and deceptively screwed over far too many women. Not even sex with his wife was loving or kind.

REJOICE. Not all was lost on women in Californication. Becca Moody was the Daria meets My So Called Life offspring of Hank Moody. Not only was she smart, funny, talented, and had a strong sense of self, she stood up for herself and called her dad out on his shitty behavior.

Love/Hate: The One That Got Away-ish

Californication’s writers played deeply into men’s and women’s insecurities about love and self-worth. Hank and Karen’s never-ending furstrating love story is a close depiction of what it’s like to love someone no matter how bad they might be for you. Even though most of us don’t have their kind of money or flawless hair. If you’re the one that got away or you lost your one, it’s so oddly comforting to know the other person can’t shake you as much as you can’t shake him or her.

There is a glorious sub plotline in the last season where Marcy comes into herself as a feminist. She aligns herself with like-minded women and empowers Karen to rely on herself to fix her problems and not on shit-bag Hank or Charlie. HELL YES.

Love/Hate: Everyone’s family is insane, even, (and especially) the rich ones

Sometimes, even the worst crimes are forgivable if they’re committed by someone you love more than you love yourself. Destructive? Yes. True? It’s the holidays, what do you think?

Hey! Look at that! A show that depicts a writer as a must-have sexy commodity in the world. Sure, why not.

Natasha McElhone is like a less-accessible Connie Britton. Radiant, quietly powerful, and still quite vulnerable.

Hate: California is the worst place on earth

There are a lot of TV shows and movies that make me think LA is as awful as a lot of people say it is and I should just stay on the RIGHT coast. Even Hank himself always romanticized going back to New York. My friends in Los Angeles have been trying to convince me for years that LA is nothing like the way it’s portrayed on TV and film. But, then again, LA’s LA-ness is the reason why Californication ever existed. Not boding so well for the whole “Not everyone here is trying to make it in Hollywood and is a total vapid hack.”