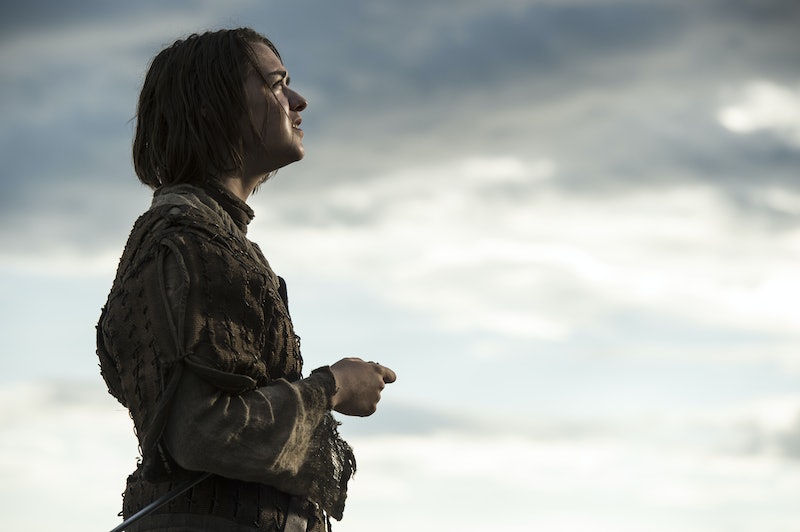 Are you even close to recovered yet? The Game of Thrones Season 5 finale seemed to drop one bomb after the other and, ultimately, left the fates of almost all of the season’s most influential characters hanging in the balance. I still wake up in the middle of the night with a million questions racing through my mind. Where did Sansa and Theon run? Who is closing in on Daenerys? And, the ever-popular question, is Jon Snow really dead? But there's another question that, unlike Jon Snow’s fate, hasn’t gotten as much attention this summer (I mean, can you blame us?) — Will Arya's vision come back on Game of Thrones ? WARNING: SPOILERS FROM A SONG OF ICE AND FIRE BOOK SERIES BELOW.

When we left off with Arya, she is blinded as punishment for killing Ser Meryn Trant. Jaqen H'gar, or the guy wearing his face, drinks poison and dies to demonstrate to Arya that death is an escape, not for personal revenge. People without faces are no one, but Arya — with her personal vendettas — is still a someone. Arya also goes blind in the books, but not as a punishment — being blind is a part of her training in the House of Black and White. What does this divorce from the book series mean? Is her fate the same as the one she faces in the book, where her vision does return?

So, is Arya blind? Yes. Will it be forever? Probably not. Taking the Song of Ice and Fire books thus far into consideration, along with fan theories, and cast interviews, here are all of the reasons I think Arya will do some badass assassinating while blind, only to have her vision restored.

Just Read What Happens In The Book

Like I said, her vision does return in the books, which is pretty promising — though, the show has made other detours from George RR Martin's source material in the past. The fact that she lost her vision as punishment already runs the storyline way off course.

Maisie Williams Is Not Feeling The Contacts

Williams described in an interview with HBO the ordeal that went into inserting the “16-millimeter” contact lenses that gave her eyes an ominous, milky look.

“Yeah! We had these massive contacts, which were like 16-millimeters wide. They lifted up my eyelid and slid in this thing. It honestly felt like I had bottle caps in my eyelids. I couldn't see anything out of them, so it was quite real. It was really hard to open my eyes, and it was just perfect for what I had to do.”

Williams has also stated that she is worried about shooting Season 6 because of these intimidating lenses and does not want to wear them for the rest of the series.

People Joke About It

When it comes to Jon Snow’s death and other GoT twists, no one’s laughing. But, apparently, Arya’s vision has been the butt of many jokes for book fans, at the expense of Maisie Williams. She said that the going blind twist was actually spoiled for her by fans of the book series. Williams explained at Comic-Con:

People would come up and be like, ‘Arya goes blind!’ … Even though I didn’t know it, I’m like, ‘Yeah, I know. Yeah, I’m so aware and pretend I knew but I didn’t.

Some fans really don't care about spoiler-etiquette, I guess.

Maisie Is Not Afraid To Tell It Like It Is

Williams tells it like it is and isn’t afraid to confirm spoilers for fans — even when it breaks our hearts. I think the young actress has a case of schadenfreude, or pleasure in fans’ pain. Remember her Red Wedding video announcement?! So, I’m not surprised that Williams has confirmed Arya’s lack of sight, but she has also honestly said she hopes it comes back.

I hope that her sight comes back, but if not, I think she should become a real badass assassin without sight. She'd be one of those people where you think they're the underdog and then all of a sudden they're an amazing killer.

I mean, Arya's already thrived as the underdog so many times before. It would make sense.

In The Book Arya Can Still See, Sort Of

In the book series, Arya and Jon Snow, like Bran, are Wargs. While Arya goes blind, she can still see through her Dire wolf. Since this plot was never introduced on the show, I think they are going to have to find other ways for Arya to see or have her vision return.

Really, No One Is Safe

OK — in the books, Arya's vision returns after the test is complete — but, in Season 5, the show made some pretty big changes and diverged from the books. Characters have been killed off on screen who are still alive and well in the pages of the book series. On the HBO drama, no one is safe — not even Arya.