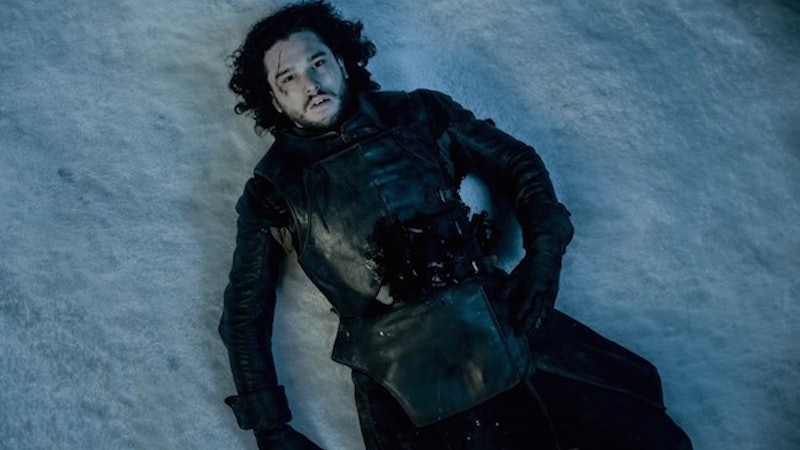 Game of Thrones’ Season 5 finale dropped one bomb after the other on fans and left so many loose ends that it felt like life was unraveling. OK that was a tad dramatic... Still, from Sansa and Theon taking a flying leap, to Arya losing her eyesight, to Khaleesi’s horsemen, to Jon Snow’s death (maybe?), there are just too many cliffhangers for fans to stew over until next season. And, as questions about Season 6 grow, GoT fans are becoming an increasingly opinionated group when it comes to the fate of the many characters who are currently hanging in the balance. And, basically, Game of Thrones fans are tired of hearing these 9 things.

As the Internet swells with show predictions, audiences are proving that they are already invested in the next season — and they have a lot opinions about it. As a group, GoT fans are always ready to defend their favorite characters and share predictions and show theories. These fans are seriously invested. When conversing with fans, be prepared for rants about twists and familial theories, and whatever you do, don’t cross them. For your own safety (and sanity), here are things you definitely shouldn’t say to a GoT fan waiting for Season 6.

This one stings because it’s so fresh. But, also, any “so-and-so’s” dead remark is rude. Plus, Jon Snow is not dead. OK, thanks.

2. “Isn’t that the nerdy show with dragons?”

No, it’s the awesome television adaptation of a best selling book series.

3. "Some spoiler that they read in the book…"

Break my heart, why don’t you! Spoilers are just not cool! This utterance is often accompanied by an equally annoying, “I can’t watch the show, because the books are better.” They're both good, OK?

Because the television series has seriously diverged from the books! Also, George R. R. Martin is the world's slowest writer, so fans are also waiting for the next book.

OK, they may have a point, here.

Well, I hope you’re in a comfortable seat because we are going to be here for awhile.

Just kidding, nobody says that!