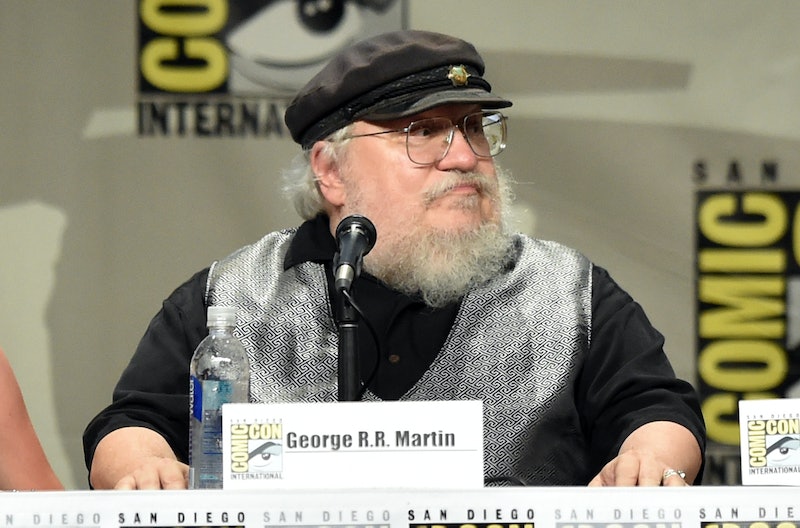 George R.R. Martin has a message for fans who think his famous book series will end in an apocalyptic situation: You're wrong. In an interview with Sean Collins of Observer, the A Song of Ice and Fire ending will actually conclude on a "bittersweet" note, which might confirm multiple fan theories. Because everyone knows R + L = J.

Martin, infamous for murdering your favorite characters as quickly as you grow to love them, likened his plans for the series to J.R.R. Tolkien's ending for The Lord of the Rings . Martin says, "It ends with victory, but it’s a bittersweet victory. Frodo is never whole again, and he goes away to the Undying Lands, and the other people live their lives. ... All I can say is that’s the kind of tone I will be aiming for." All this might be comforting for fans worried that Martin will leave Westeros as scorched earth, but it leaves us pretty certain of who Martin plans to have leave the Seven Kingdoms for parts unknown.

In A Song of Ice and Fire, the sigil of House Targaryen — of which Daenerys is the only confirmed survivor — is a three-headed dragon. While in the House of the Undying, the Mother of Dragons has a few visions of herself riding Drogon off into the sunset, followed by Viserion and Rhaegal carrying unnamed riders. The theory goes that Jon Snow and Tyrion Lannister are both secretly Targaryens — Daenerys' nephew and half-brother, respectively — and will join the youngest Targaryen in her last flight out of Westeros.

These theories are tenuous at best, of course, and I may have just offended Martin by turning his words into a clickbait headline. But the beloved author has already confirmed that some fans have correctly predicted the ending to A Song of Ice and Fire , and, given his statements to Observer, the dragon riders theory makes perfect sense. We'll know whether Jon Snow survives to make our dreams come true when The Winds of Winter — eventually — hits store shelves.

More like this
'Mayfair Witches' Already Changed 2 Major Characters From The Books
By Grace Wehniainen
'GoT' Star Emilia Clarke Says She "Just Can't" Watch 'House Of The Dragon'
By Brad Witter
Everything To Know About The 'Daisy Jones & The Six' TV Series
By Maxine Harrison and Brad Witter
The Song At The End Of 'The Last Of Us' Ep 1 Has A Deeper Meaning
By Sophie McEvoy
Get Even More From Bustle — Sign Up For The Newsletter
From hair trends to relationship advice, our daily newsletter has everything you need to sound like a person who’s on TikTok, even if you aren’t.