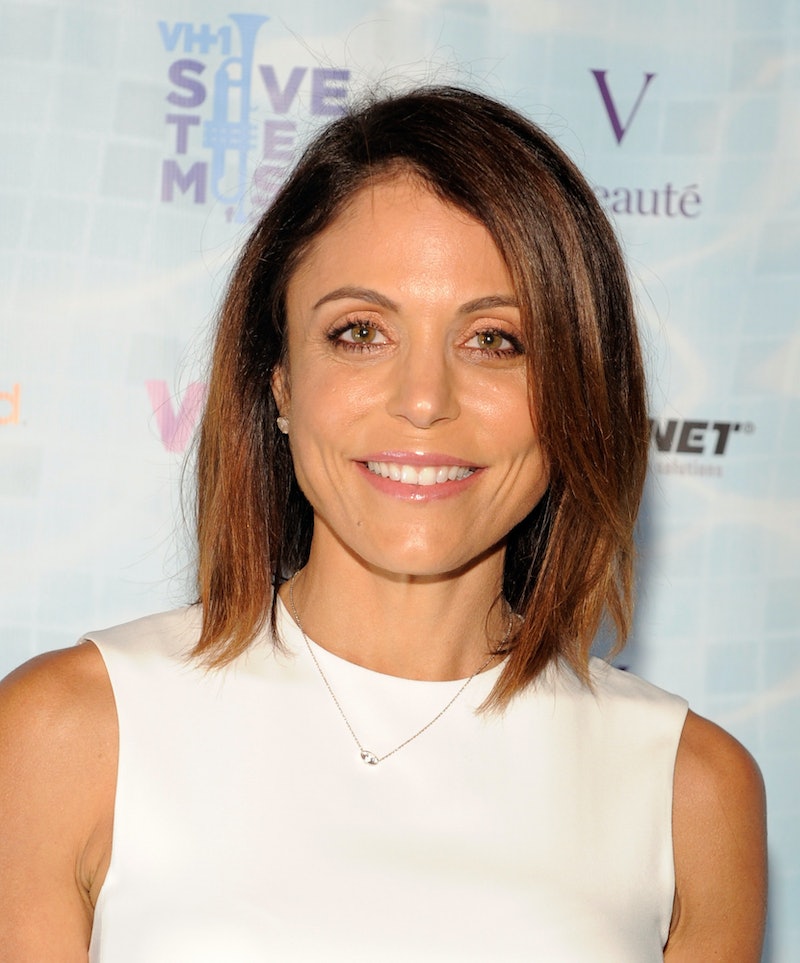 Excuse me while I read between the lines. Bethenny Frankel won't admit she's dating Eric Stonestreet, but she says she is sleeping with him. Har, har, nothing like a little naughty joke to throw everyone off, right? Nice try, Bethenny, but I'm on to you. The Real Housewives of New York star didn't have to come right out and say she's hooking up with the Modern Family actor on Watch What Happens Live Tuesday, because what she didn't say is just as telling. Bethenny and Eric sitting in a tree...

Frankel, 44, was asked to address the rumor that she and the 43-year-old actor had become an item after photos surfaced a few months ago showing them hanging out and looking rather close at the 2015 CAA Upfronts Close Celebration Party. Here's what she had to say on WWHL:

Eric Stonestreet and I are friends. He's an awesome guy. I don't confirm or deny dating rumors and that's what I'm saying. Eric's awesome. As I said today, he's a great actor. And we're sleeping together tonight. He's at my apartment right now. So, you know?

It would be wrong to take the bait and focus on the "sleeping together" joke she's dangling before your eyes — that's exactly what she wants you to do! No, no, let's instead address the fact that she isn't confirming or denying the dating rumor. What in the hell is that about? Is everyone suddenly taking lessons from Nicki Minaj, who won't confirm or deny her reported pregnancy? If you aren't interested in another person, why wouldn't you simply come out and say you aren't dating? Aren't you hindering your chances of meeting someone else (or hurting the other person's chances) by being all mysterious about it?

As I see it, Frankel and Stonestreet are definitely dating, and the Housewives star pleading the fifth and then throwing in a joke is proof. Remember: Frankel is a native New Yorker. Coloradans are born knowing how to ski, hike, and maintain healthy BMI's; New Yorkers are trained in the art of snarky comebacks for the sake of survival.

I love Frankel and was heartbroken to hear about her messy divorce from Jason Hoppy. She deserves happiness and I hope she has found it with a guy like Stonestreet — who may seem like her polar opposite, but could actually be the yin to her yang. Their relationship may never evolve past one that is fun and, I hope for both of their sakes includes a lot of sleeping in the same bed, but that's totally cool. Frankel could use some levity in her life while dealing with her nightmare of a divorce.

Stonestreet is absolutely adorable, charming, and hilarious, and Frankel is the Housewife with whom I most want to share cocktails and crazy juicy gossip. They're a perfect couple — now they need to admit it and give us more glorious photos of their union.