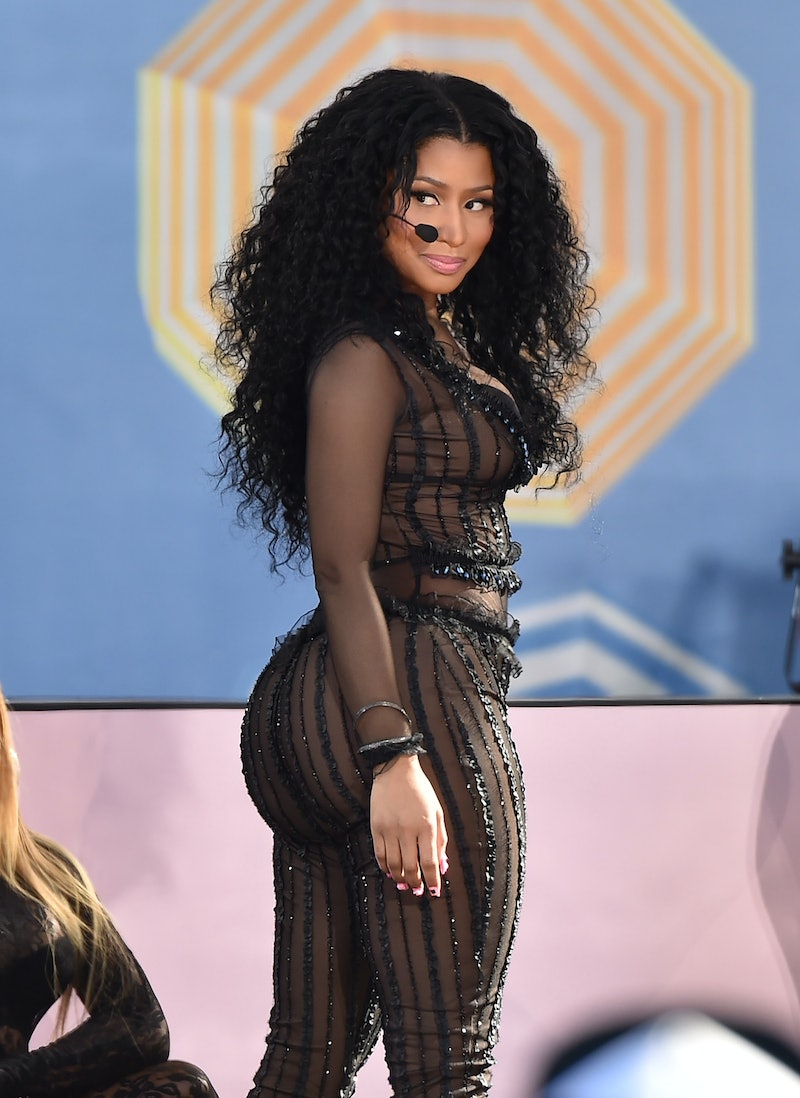 Consider it the cutest baby announcement that wasn't actually at all a baby announcement. During her concert on Saturday in Burgettstown, Pa., Nicki Minaj introduced Meek Mill by calling him her "baby's father," which calls for a thorough examination of her social media accounts to determine whether she was, indeed, joking. The 32-year-old rapper has been dating Drake's 28-year-old nemesis publicly for about six months. The two are reportedly tight and their relationship is serious, which is why it was surprising, but not all that shocking, to hear Minaj introduce Mill by saying, "Make some noise for my baby father!" Who wouldn't take her statement literally? Bustle has reached out to Minaj's rep for comment, but has not yet heard back.

Fans immediately began posting the juicy gossip on Twitter, hoping to be the one who got to break the news that the "Truffle Butter" rapper was with child. The best part was: Minaj herself didn't deny or actually confirm the pregnancy leading folks to believe it had to be true, because who would be so much of a prankster that she would allow everyone to believe something so exciting, only to pull the rug out from under everyone a few days later.

Um, have you met Nicki Minaj? That's exactly something she would do. Here's Minaj on stage, talking about her "baby's father," and judging by Mill's amused, but joyful face, you can't help but think this guy would be delighted to have her baby:

Now, come on, Minaj knew exactly what she was doing when she later posted this photo of herself with Mill and the "Baby" caption — don't care if she's referring to a Chris Brown lyric — she's having herself a grand old time:

Minaj kept up the ruse (or is it a ruse?) by retweeting fans' messages about her pregnancy, along with her own emoji's, which tell us nothing:

More talk about "babies" (babies are clearly on the brain):

I haven't a clue what this one means, but, again, an emoji reply:

It's no secret that Minaj wants to be a mom one day. In a 2013 interview with Marie Claire, she said,

I was praying every day, "You know what, Lord? I want to be a mom one day, and I want to start becoming the woman who I want to parent my child." I wanted all of the feelings of entitlement to leave me, because some people have this life for a year or five or 10 — and I didn't want to become a person who wasn't enjoying the moment.

But fans are going to have to wait a bit longer for her Beyoncé-style concert announcement. Sources close to Minaj reportedly told TMZ she is not pregnant and that she uses the term "baby father" a lot, but that she doesn't feel it has the same weight as saying, "the father of my baby." She considers it a term of endearment and is even said to have used it in the past to describe her friend Lil Wayne.

As for her social media mischief — seems like exactly the kind of thing Minaj would do. Any why not? A girl's gotta get her kicks while she's out on tour.

More like this
Jennifer Coolidge Needs 'Legally Blonde 3' To Happen So She Stops Getting Hot Dog Jokes
By Jake Viswanath
Who Is Camila Cabello Dating? She's Getting Cozy With Lox Club CEO Austin Kevitch
By Radhika Menon
Kim Kardashian & Pete Davidson’s Relationship Timeline From Start To Finish
By Jordyn Tilchen and Bustle Editors
'A League Of Their Own' Star Abbi Jacobson Is Engaged To Jodi Balfour
By Jake Viswanath
Get Even More From Bustle — Sign Up For The Newsletter