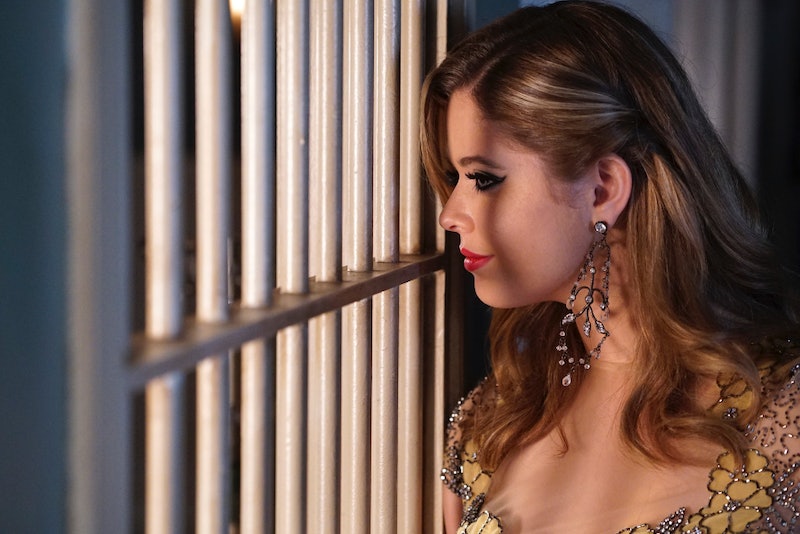 You'd think that after discovering that your former BFF is actually the one who's been tormenting you and your friends for the past two years, then your life would have nowhere to go but up. However, the Pretty Little Liars finale, "Game Over, Charles," proved that this was most likely not going to be the case for Rosewood's Queen Bee, Alison DiLaurentis. After the big "CeCe is A" reveal, the series delivered on its promise (for once) by jumping five years into the future, as we knew it would. And in true PLL fashion, there's already multiple new mysteries to solve — including the identity of Alison's apparent husband, Mr. Rollins. Because, that's right, folks… Alison is now a married woman. And guess what? She's in danger, yet again!

Now, when I first saw Ali write the name "Mrs. Rollins" on the chalkboard, I'm not going to lie, I thought it was just the latest pseudo name she's decided to start going by. (I mean, if you haven't picked up on it by now, secret identities kinda run in the family.) However, in light of some spoilers E! teased out a few months back, it turns out that there really is a Mr. Rollins — or should I say Dr. Rollins — coming into the picture in the very near future. Though his first name (and the actor playing him) still remains a mystery, we do know that the upcoming character is a very handsome psychologist, who will be "sticking around for a little bit."

Granted, this still doesn't flat out confirm that he's Ali's new hubby, but given that we all basically have a Ph.D. in PLL at this point, I think the writers had faith that fans would be able to put two and two together. And since the show will be "introducing" Dr. Rollins into the fold, it's safe to assume that he's someone we've never met before. But that doesn't make him any less vital to the show. In fact, he could end up being a key player to some very important answers that the finale failed to tie up, which means we need to know as much about him as possible. So who is he and how did he come into Ali's life? There are a few different options to consider. For more thoughts on the time jump's big questions, check out Bustle's PLL podcast below, then read on for the biggest contenders to be this mysterious Dr. Rollins.

Like us, the Liars undoubtedly experienced some emotional backlash in light of all these Big A reveals. (I plan on sending I. Marlene King the bill from my shrink starting now until the end of time.) So after the girls left Rosewood, I wouldn't be surprised if Ali began going to therapy to try and work through everything that's happened. Enter Dr. Rollins. (I guess Dr. Sullivan was unavailable?) He's smart. He's sensitive. He's attractive. (Is there any other type of guy on this show?) Is it really all that hard to believe that Ali would strike up such a taboo relationship? It's not like she hasn't done it before. (*cough, Ezra, cough*)

Hey, if CeCe can date her own brother FOR MONTHS, then it's totally acceptable for Ali to date (and eventually marry) her sister's therapist, right? I mean, why the heck not at this point? And just imagine if CeCe also fell for the good doctor as well. You know, because this family isn't already going through enough. Let's throw a love triangle into the mix. Never say never, people!

He's The "He" That's Coming After Ali

She's already had a torturous sibling, so traitor husband is the only logical next step. Or maybe this husband has been Uber A all along and tricked Ali into falling in love with him. If that's the case, then this girl seriously has the worst luck EVER.

Because Wren had to the be answer for SOMETHING. Sorry, guys, but I'm still not over it. And probably never will be. For a funny new take on PLL's many mysteries, watch total newbies try to crack the case in the video below.

More like this
Jurnee Smollett’s Heart Is Healing
By Rebecca Carroll
6 Mind-Blowing Fan Theories About How Stranger Things Will End
By Kadin Burnett
Why Sadie Sink Is Hopeful Max Will Return In Stranger Things Season 5
By Brad Witter
What Working At Marvel Is Really Like, According To A 'Ms. Marvel' Co-Creator
By Gretchen Smail
Get Even More From Bustle — Sign Up For The Newsletter