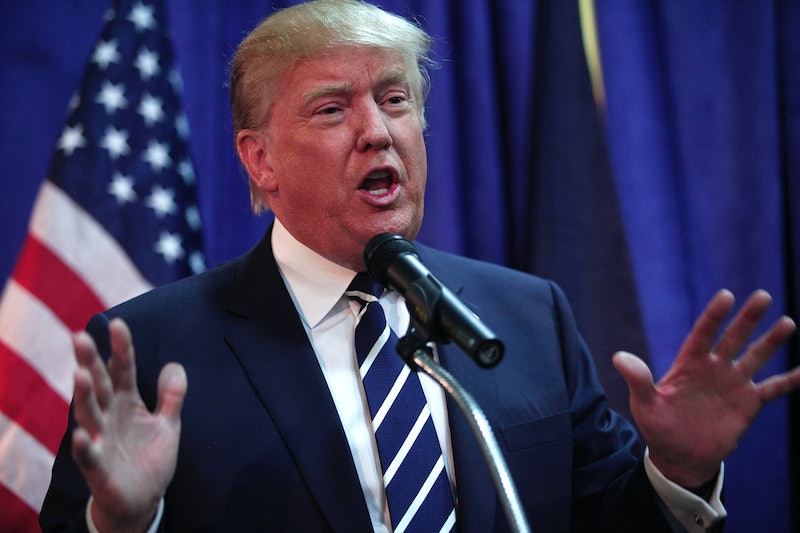 Republican presidential candidates are continuing the push to cut off Planned Parenthood's federal funding in the wake of an anti-abortion group releasing a series of controversial videos showing Planned Parenthood executives talking about the use of fetal tissue for medical research. But in quite an unexpected twist, Donald Trump defended Planned Parenthood in an interview with Fox News' Sean Hannity on Tuesday. Trump, who recently made news over a misogynistic comment about Megyn Kelly, rattled off the true facts about Planned Parenthood and abortion, surprising women's health advocates and pissing off Republicans.

During the interview, Trump said that Planned Parenthood does "good things that aren't having to do with abortion." Trump, who identified as pro-choice until he announced in 2011 that he had changed his views, repeated that he opposes abortion, but added that he believes Planned Parenthood's other services mean that its funding shouldn't be immediately stripped away. He asked Hannity to think about Planned Parenthood having two separate functions. He said the abortion part is a "fairly small part of what they do, but it's a brutal part, and I'm totally against it and I wouldn't do that." At one point, Trump had supported a push to shut down the government rather than give federal funding to Planned Parenthood. But in his interview with Hannity, he seemed to have totally changed his views:

Trump's assertion actually checks out: Abortion services make up only three percent of Planned Parenthood's total services. The most focus goes toward STI and STD testing and treatment (35 percent), contraception (35 percent), and cancer screening and prevention (16 percent), according to FactCheck.org. More importantly, zero federal funds go toward providing abortions, because of federal law.

Unfortunately, though, it's still unclear whether Trump supports cutting off funding as a way to make Planned Parenthood stop providing abortions. When Hannity asked if the government should provide funds to organizations that perform abortions, even if those funds aren't used for abortions, Trump's response sounded like he wanted to hold the funding over Planned Parenthood until they stop performing abortions:

Maybe unless they stop with the abortions, we don’t do the funding for the stuff that we want.

Donald Trump seems to have realized that banning all abortions, shutting down the government, and defunding Planned Parenthood are extreme positions that are way too far outside the mainstream for even him to take. We hope that the rest of the GOP field will wake up and reconsider their extreme and unpopular positions on defunding preventive care, abortion bans, and the other economic issues that women and their families care about.